Why is there more lead and mercury in the universe than gold?

I am watching a Science Channel program on the collapse of massive stars and it got me wondering... What is the distribution of heavier than iron elements in the universe. (It is my understanding that some of these elements are formed by the shock wave compressing the outer layers of the star as it explodes)... This lead me to the Wiki about the iron peak and the chart there with the different amounts of elements in the universe:

At the end of the chart we see there is more mercury and significantly more lead in the universe than gold. Why is this?

The high abundance of lead (and to a lesser extent mercury) compared to gold comes about from their origins in different nucleosynthetic process in different types of stars. There are three main reasons:

The first is that lead is the final stable element that is built up (mainly) by the s-process. The s-process builds up the abundances of certain heavy elements in stellar interiors through a series of slow (hence "s") neutron captures onto existing elements around the iron-peak, followed by radioactive decays.

The process stops at lead (and bismuth) because there is no way to reach any of the heavier stable elements (U, Th) because the intermediate products (e.g. Po, At, Rn, Fr) are unstable and decay too rapidly to allow any build up of a significant abundance of heavir elements. In fact the terminus of the s-process is dominated by a circular lead-bismuth-polonium cycle, which at equilibrium ends up producing mostly the 206 and 208 isotopes of lead. So you can think of this as a sort-of pile-up process a bit like passengers on a train, where many get off at intermediate stops, but anyone left on the train has to get off at the last station.

Mercury is also an element that is produced in some abundance by the s-process, but in contrast, gold is not one of the stations on the s-process train. Most of the gold in the universe is produced by the rapid r-process of neutron capture. Here, in sites with a much higher neutron flux, many neutron captures happen consecutively followed by decays. This is a way to build many heavy elements that would be unreachable by the s-process because the intermediate nuclei are highly unstable. The r-process gets around that by simple fact of having such a high neutron capture rate that the unstable nuclei don't get chance to decay before they encounter another neutron. Gold is certainly one of the more (but not the most) abundant r-process nuclei, but in general the r-process elements are rarer for a reason I explain next.

Contributions of the r- and s-process to elemental abundances in the solar system. (from Sneden & Cowan 2003), note the logarithmic scale). 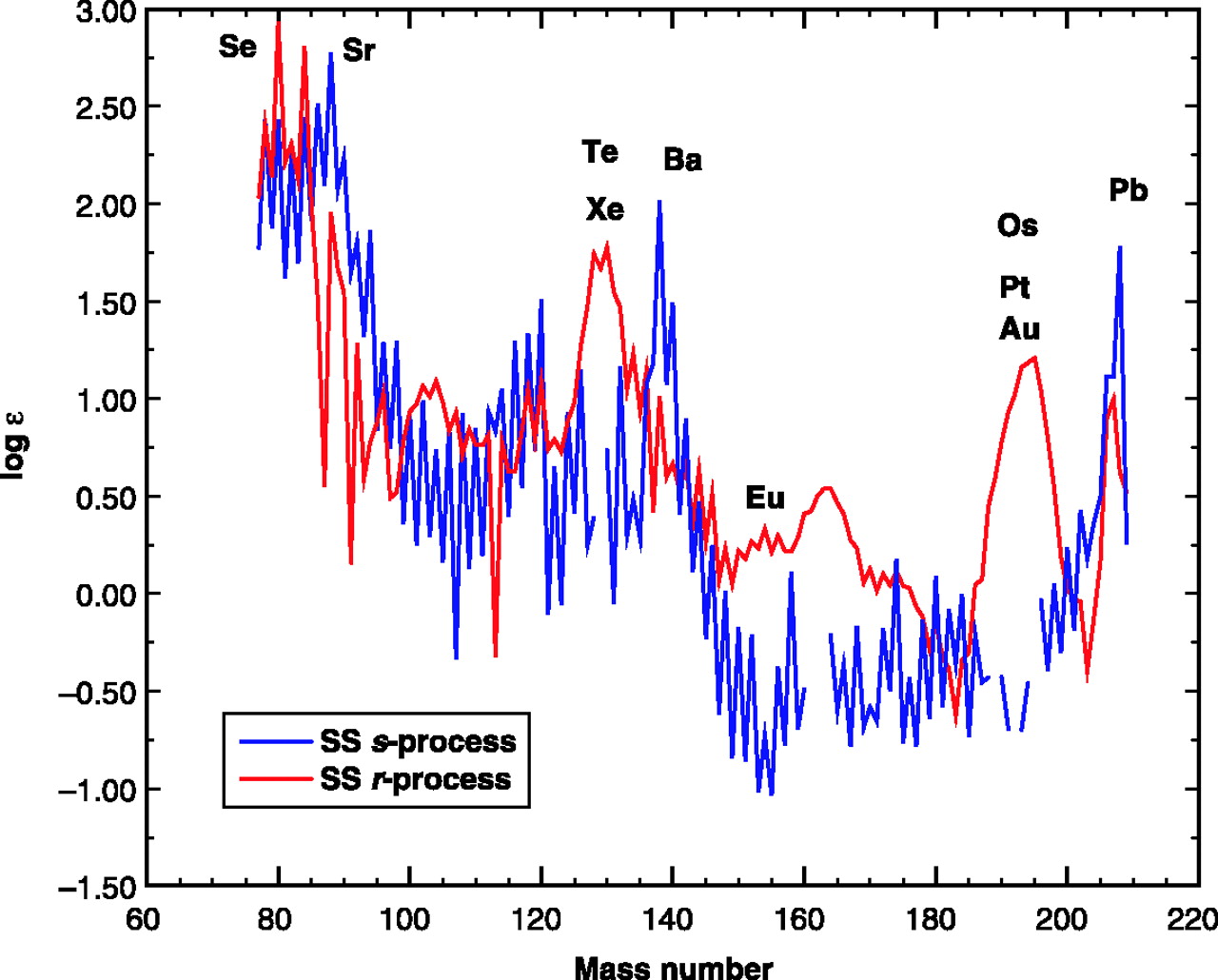 The second reason lead is common is that the s-process operates in relatively abundant low-mass star. By low-mass, I mean stars between 1 and a few solar masses, that have had time to be born, live and die in the lifetime of the universe, but will not explode as supernovae. The lead is produced by s-process neutron capture in their interiors during their giant phases and is then expelled through mixing and strong stellar winds into the interstellar medium.

It is fair to say that although this basic picture is understood, there is a phenomenal amount of progress to be made in understanding exactly what fraction of each chemical elements was made by what process in what type of stars. This is a highly active research topic and I highly recommend the review by Frebel (2018) as further reading.

Heavy elements come from Supernovas and from Neutron star explosions. They may make heavy elements in different proportions, and there are more of one than the other.

Many of the elements made in a supernova are unstable and decay into lighter elements such as lead in particular. Over billions of years the amount of lead has steadily increased.

Here is a NASA article

Not the answer you're looking for? Browse other questions tagged nuclear-physics astrophysics stars fusion elements or ask your own question.

5
Why are elements with even atomic number more abundant?
3
Is the rarity of elements related to their position on the periodic table?