Can elements heavier than iron be present in a star's core?

My understanding is that elements heavier than iron and nickel are not formed in a star but, can heavy elements such as lead and others be present/found in a star's core ?

I ask because the following document

gives the impression that lead and other heavy elements may be found in a star's core and I thought that was not possible.

It is a myth that heavier elements than iron are not produced in stars, slow-neutron-capture-process is a nucleosynthesis process that occurs at relatively low neutron density and intermediate temperature conditions in large stars. For details of what elements are produced and about the process itself, see S-process.

The heavier-than-iron elements are not formed during stellar fusion, but they are formed during supernovae. Then the oldest stars cannot have these heavier elements, but new generations, formed from 'recycled' material of other stars that went supernova can.

There are heavier that iron elements on Earth, the Earth was formed from the same stuff clumping together that the sun was, so some fraction of such elements should also be present in the sun.

EDIT: Sorry, I forgot about the s-process that Wolphram jonny mentioned, thanks for that. The process in supernovae that I mentioned is the r-process.

The star that is studied in the paper that you refer to is a very old, very metal-poor "Uranium giant". This is an evolved star with a very deep convective envelope.

The U and Th in the supernova ejecta (along with full range of other heavy elements in various proportions) were mixed into the material that formed the star we are talking about here. Those elements would have been present in the core and throughout the whole of the star.

The paper you reference attempts to find the lead content of the star. Lead can be produced by the s-process inside evolved giant stars, by slow neutron capture onto existing iron-peak nuclei. However, in a very metal-poor star, this is likely to be ineffective, and/or has not had time to occur in previous stellar generations and the paper argues that the small amount of lead that is found is consistent with the radioactive decay of (some of) the r-process Uranium and Thorium already in the star when it formed. The lead would also be found all the way through to the core of the star.

As an aside, the effectiveness of the s-process in stars that already have some iron in them, means that about half the heavy element abundance of the solar system was created inside stars and not in supernova explosions. The Sun does contain most of the iron-peak and stable heavier elements in its core and envelope, but these were not produced in the Sun; they were in the material it was born from.

I'm guessing (and I guess breaking the rules, but I'm interested whether my intuition is at all accurate): I've always assumed that although stellar fusion stops at iron, there is plentiful energy from the prior fusion processes available to create the elements heavier than iron, albeit at a net loss of energy. In decreasing and exponentially smaller amounts the further up the periodic table you climb, obviously, but in a star "exponentially smaller" is seriously relative. Not being a physicist, I have no idea if these further products would be broken down...i.e. would they survive? That they are created within a star (whether during a nova event or otherwise) is not, as far as I am aware, debatable. A tiny loss of energy in a tiny part of a star...it's a little like life -- a suspension of entropy (I really hesitate to say reversal) -- because we have an open system with a humungous fusion generator allowing "unlikely" local phenomena to persist.

Yes. Not only supernovae produce elements heavier than iron, many even heavier elements are produced in dying low mas stars. Here is the table of nucleosynthesis from Wikipedia Commons: 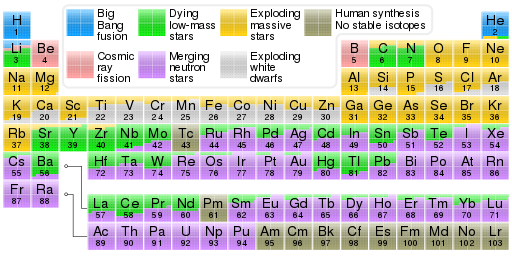 Synthesis of elements as heavy as Amercium once has been suspected during explosion of the supernova of the Crab nebula, but later these results were not confirmed.

Not the answer you're looking for? Browse other questions tagged astrophysics stars stellar-physics metallicity or ask your own question.

27
Why the distribution of elements on Earth?
41
What is the origin of elements heavier than iron?
3
How did all of the heavy elements on earth get here?
3
What prevents a star from collapsing after stellar death?
4
Typical rotation speeds for black holes
5
What is the largest possible mass for a stable planet made of iron?
2
Compositions of stars at different stages
7
Why is there more lead and mercury in the universe than gold?
1
Would a head-on collision between two stars create heavier elements?