What is the origin of elements heavier than iron?

In all the discussions about how the heavy elements in the universe are forged in the guts of stars and especially during a star's death, I usually hear that once the star begins fusing lighter atoms to produce iron (Fe) that's the end of the star's life and the whole system collapses onto itself; and based on how massive the star was initially, it has different outcome - like a white dwarf, a neutron star or a black hole.

I have rarely heard a detailed explanation of how the elements heavier than iron are produced. I would appreciate a convincing explanation of this process.

Elements heavier than iron are produced mainly by neutron-capture inside stars, although there are other more minor contributors (cosmic ray spallation, radioactive decay). They are not only produced in stars that explode as supernovae. This has now been established fact since the detection of short-lived Technetium in the atmospheres of red giant and AGB stars in the 1950s (e.g. Merrill 1952), and it is tiresome to have to continue correcting this egregious pop-sci claim more than 60 years later (e.g. here).

There is still ongoing debate about the site of the primary r-process. My judgement from a scan of recent literature is that whilst core-collapse supernovae proponents were in the majority, there is a growing case to be made that neutron star mergers may become more dominant, particularly for the r-process elements with $A>110$ (e.g. Berger et al. 2013; Tsujimoto & Shigeyama 2014). In fact some of the latest research I have found suggests that the pattern of r-process elemental abundances in the solar system could be entirely produced by neutron star mergers (e.g. Wanajo et al. 2004), though models of core-collapse supernovae that incorporate magneto-rotational instabilities or from rapidly-rotating "collapsar" models, also claim to be able to reproduce the solar-system abundance pattern (Nishimura et al. 2017) and may be necessary to explain the enhanced r-process abundances found in some very old halo stars (see for example Brauer et al. 2020).

Significant new information on this debate comes from observations of kilonovae and in particular, the spectacular confirmation, in the form of GW170817, that kilonovae can be produced by the merger of two neutron stars. Observations of the presumably neutron-rich ejecta, have confirmed the opacity signature (rapid optical decay, longer IR decay and the appearance of very broad absorption features) that suggest the production of lanthanides and other heavy r-process elements (e.g. Pian et al. 2017; Chornock et al. 2017). Whether neutron star mergers are the dominant source of r-process elements awaits an accurate assessment of how frequently they occur and how much r-process material is produced in each event - both of which are uncertain by factors of a few at least.

A paper by Siegel (2019) reviews the merits of neutron star merger vs production of r-process elements in rare types of core collapse supernovae (aka "collapsars"). Their conclusion is that collapsars are responsible for the majority of the r-process elements in the Milky Way and that neutron star mergers, whilst probably common enough, do not explain the r-process enhancements seen in some very old halo stars and dwarf galaxies and the falling level of europium (an r-process element) to Iron with increased iron abundance - (i.e. the Eu behaves like "alpha" elements like oxygen and neon that are produced in supernovae). 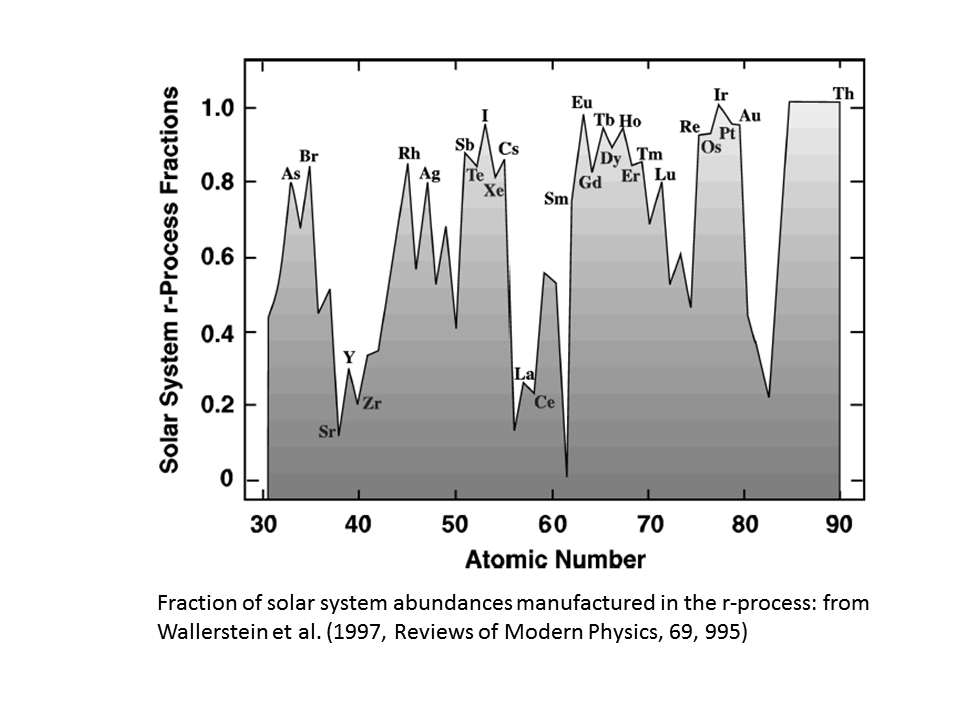 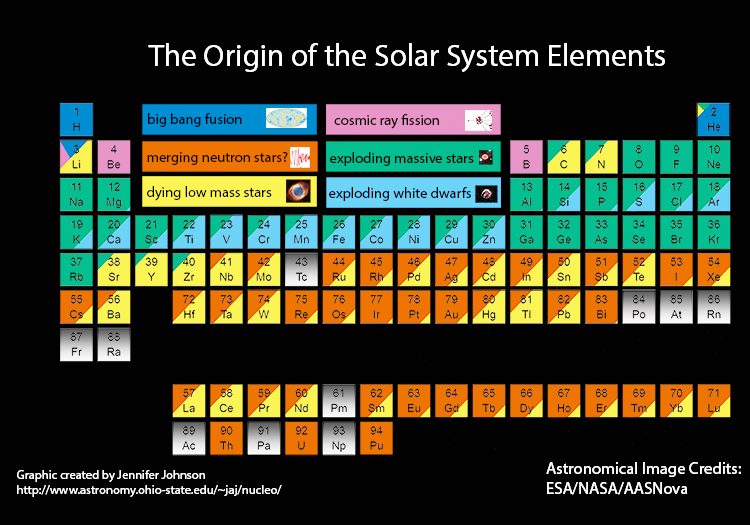 An even more recent version of this diagram is provided by Arcones & Thielemann (2022). If you look carefully there are some minor differences between these two diagrams (e.g. Bi). 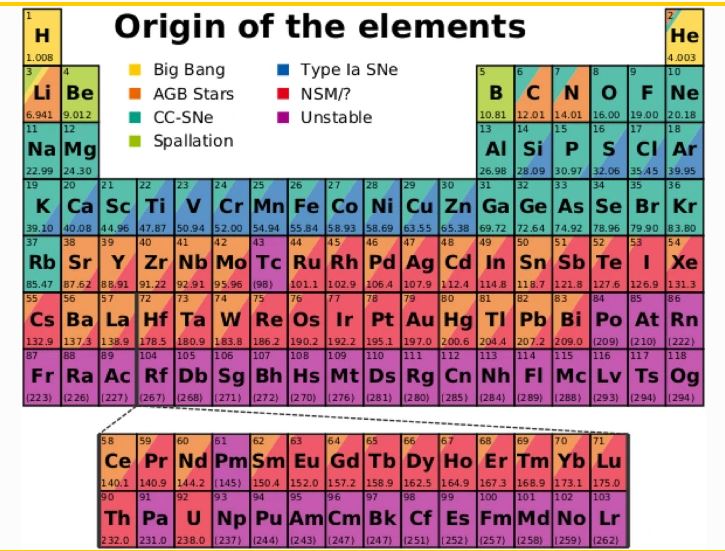 -1
Heavy elements creation
0
Why can gold only form in outer space?
17
Why can't Iron fusion occur in stars?
20
How does uranium from supernovae explosions end up in mineral veins in a planet?
8
What is the reason stars do not produce elements heavier than iron
6
Are we the dust from more than one dying star?
2
How are we stardust?
4
Nucleosynthesis: other than big bang and supernova
5
Why is hydrogen or helium used in nuclear fusion?
4
Why does a star beyond a certain mass limit (Chandrasekhar limit) only become a black hole?
See more linked questions

27
Why the distribution of elements on Earth?
14
Why heavy elements don't sink to the core?
5
What is the largest possible mass for a stable planet made of iron?
8
What is the reason stars do not produce elements heavier than iron
4
Nucleosynthesis: other than big bang and supernova
28
Can elements heavier than iron be present in a star's core?
3
White dwarf stars: limits to stability
2
How big would a star made of pure deuterium have to be to start fusion?