A virtual image may be observed directly or may serve as a source to be reimaged by a subsequent lens system, but it cannot be produced on a screen

I am currently studying the textbook Modern Optical Engineering, fourth edition, by Warren Smith. The textbook presents the following images and explanation:

In Fig. 1.9 the action of a concave lens is sketched. In this case the lens is thicker at the edge and thus retards the wave front more at the edge than at the center and increases the divergence. After passing through the lens, the wave front appears to have originated from the neighborhood of point $P'$, which is the image of point $P$ formed by the lens. In this case, however, it would be futile to place a screen at $P'$ and expect to find a concentration of light; all that would be observed would be the general illumination produced by the light emanating from $P$. This type of image is called a virtual image to distinguish it from the type of image diagramed in Fig. 1.8, which is called a real image. Thus a virtual image may be observed directly or may serve as a source to be reimaged by a subsequent lens system, but it cannot be produced on a screen. The terms “real” and “virtual” also may be applied to rays, where “virtual” applies to the extended part of a real ray. 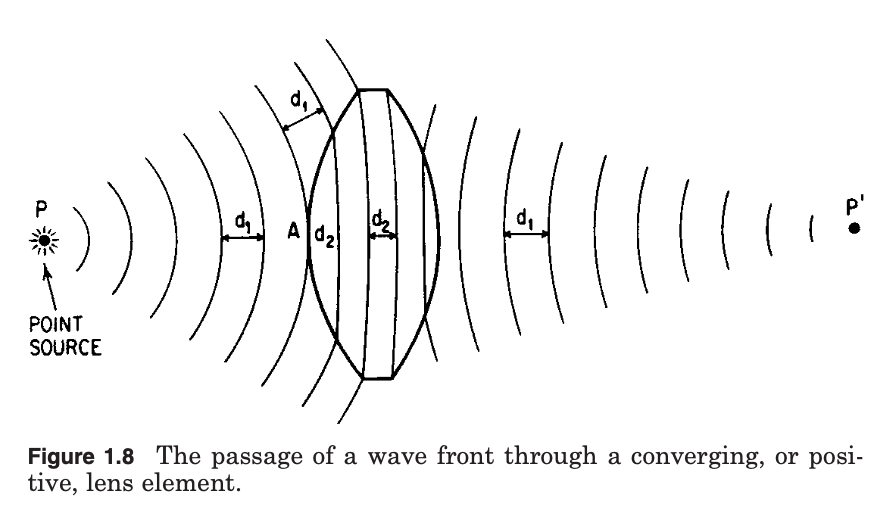 It is this part that confuses me:

Thus a virtual image may be observed directly or may serve as a source to be reimaged by a subsequent lens system, but it cannot be produced on a screen.

I thought the entire point was that the virtual image cannot be observed directly (or, actually, observed at all). So I'm wondering what the author means by this part?

I would greatly appreciate it if people would please take the time to clarify this.

You can directly observe virtual images. All you have to do is look through a diverging lens. People who are nearsighted and wear glasses to correct their vision do this all of the time.

The virtual image is, well, virtual. You could argue that it is a trick: it is just the location where light appears to be coming from. In other words, a virtual image looks just like if the object was at the image position (magnified appropriately). This is why we can directly observe them or why they can be imaged by other systems; they are indistinguishable from just regular sources of light.

This is also why you cannot see them on a screen. If you put the screen at the light source and then look at the screen then you aren't going to see anything. You need light to converge onto the screen in order for an image to be on the screen. Light diverges away from virtual images, so they cannot be imaged.

Your retina is just a screen. A real image needs to be projected onto it in order for you to see it. So in this sense, you can only 'directly' observe real images.

However, don't forget that your eye also has a lens in front of the retina. This lens can transform a virtual image into a real one that is projected onto your retina. In this sense, you can 'directly' observe a virtual image.

So both can be considered correct. Only real images can be 'directly' observed in the sense that only they can be projected onto a screen. But your eye can 'directly' observe virtual images as well, because it's not just a screen - it is a lens in front of a screen.

(The same reasoning can be applied to any camera, of course, not just our natural cameras.)

0
System of Lenses. Virtual Objects and Nature of Image (Real/Virtual)
2
What is exactly an ‘virtual object’? (From the point of view of lens maker’s formula)
0
finding focal point of concave lens using concave and convex lenses
1
Identifying real and virtual images (convex lens experiment)
2
Definition of a convex lens?
4
Why do we see a blurred image when the screen is not placed at the position where the image is formed by a convex lens?
0
Requirements for rays to converge exactly at a point $P'$
9
Why can't virtual images form on a screen?