If I reflect light from a projector using a mirror, then is the reflected image real or virtual?

I am in a great confusion about this question. In our school, we have been taught that:

I have understood the simple examples but I am confused about this example of projectors. I have done the experiment myself and I found that: 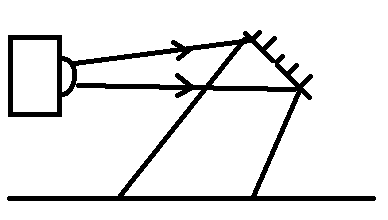 So is it a real or a virtual image?

I read many pages on the internet about real and virtual images, I can understand them and I think that it is a real image. However, I am still unsure about the answer.

So please clear my doubts.

The "rule" that real images are always inverted is not correct. That rule might work when you have only a single optical element (like a lens), but not necessarily when you have two or more.

Take a look at this:

That's a real, upright (aka erect) image labeled $I_B$. You can tell it's real because the rays at the final image actually converge at that physical location, unlike virtual images whose location of "convergence" does not actually have physical rays passing through it (only the "backtracking" rays one typically draws).

As for your projector and mirror, you can draw a ray diagram carefully (if you know the internal workings of a projector) and apply the same test to see if the image is virtual or real. But do remember that projectors can be modified so that the image you see is inverted to accommodate mirrors and such. Anyway, to get something projected on to a screen, I do believe the image needs to be real, so I would say it is indeed a real image you're seeing.

Finally, here's a simple example of two elements that again goes against the rules in your book:

The situation above has a real, inverted image using a lens and mirror (a mirror!). Thus, the rules you've been given aren't general enough to deal with multiple-element situations.

I feel an image from the projector and mirror is something like if you stand directly in front of the mirror, then you get image right back like for zero degree angle of incidence reflection, but if you turn and image is seen with an angle of incidence/ reflection an image as real as you will be seen on the other side.
Whereas lense images are different they are not mirror reflections but have medium which refract and turn the rays in some defined angle and thus are called real if they form inverted image on the other side, but virtual if they are seen on the other side but are not actually refracted image, and seem erect.