Why can't virtual images form on a screen?

Part of the definition of a virtual image is that it cannot be formed on a screen. I understand this is the case when the screen is right next to the image, since there are no physical rays that can hit the screen. But what I don't understand is why an image can't form on the screen if the screen is located sufficiently far away from the image and/or lens so that rays do physically hit the screen? The 'explanation' usually given is that real rays converge while virtual rays don't, but how is the screen supposed to know if the rays it's seeing actually converged at some point or not? The only apparent difference compared to real rays I can see is that rays for virtual images would have greater angular divergence, which would create an image on the screen, just blurry.

There seems to be some fundamental confusion here. An image is formed on a screen when light rays emanating from an object converge there. If there is no convergence of rays, then there is no image on a screen.

On the other hand, if you position a screen at a different location, then the light emanating from the tip of the portrait's nose will be spread over a whole region of the screen. The light from the neighboring points on the object will overlap, and the result will be a blurred image.

The conclusion is that the calculated image distance is where you will get a clear image; if you put your screen anywhere else, then an image will not form. Now consider what you'd get with a diverging lens.

The blue dotted lines are obtained by tracing the rays on the right hand side backward and pretending the lens wasn't there. The virtual image is the location from which the rays appear to be emanating from the perspective of somebody on the right-hand side of the lens. However, there are no actual light rays which converge there. If you place a screen at the location of the virtual image, can you see why you don't get a nice picture? 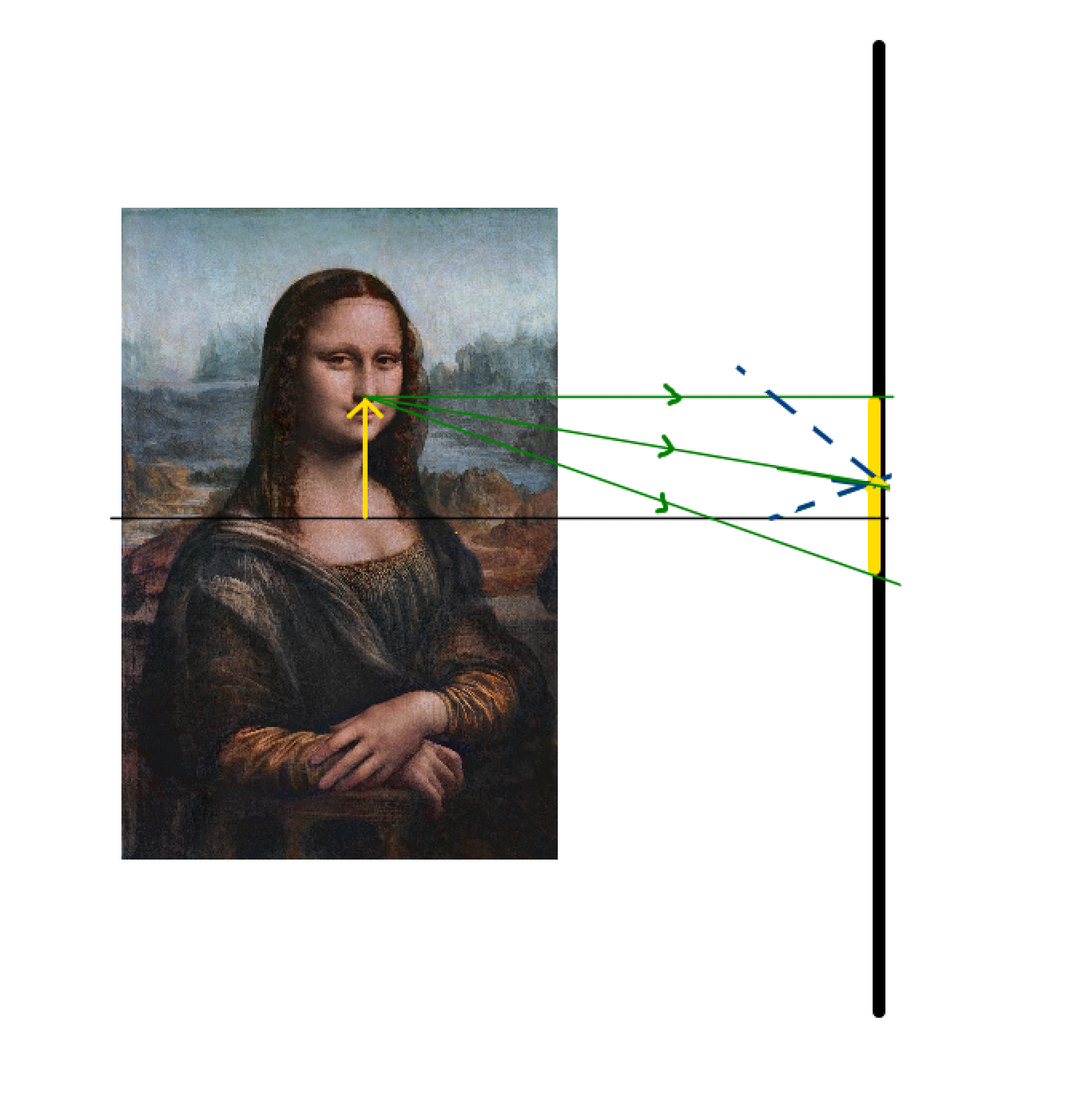 would create an image on the screen, just blurry.

I suppose you think of an image as some distribution of light that can be registered by a photo sensor. This is an intuitively obvious definition. But that's not what the technical term "image" means in optics. Citing Wikipedia:

In optics, an image is defined as the collection of focus points of light rays coming from an object.

Image in optics is the term opposed to object, and when an image is formed, it means that we basically have a kind of optical equivalent to the set of points an object is made of—from the point of view of ray propagation. I.e. if you take the rays emitted from an image, and pass them into a well-focused optical instrument, the image will be indistinguishable from an object placed at image's position—as seen by that instrument.

5
Why do we need screen to see real images?
0
How is it possible that a converging lens can form a virtual image if its function is to make the light converges?
1
Shape of a virtual image
1
Identifying real and virtual images (convex lens experiment)
2
Virtual images - Work of a brain or work of a lens?
4
Why do we see a blurred image when the screen is not placed at the position where the image is formed by a convex lens?
3
A virtual image may be observed directly or may serve as a source to be reimaged by a subsequent lens system, but it cannot be produced on a screen
1
How to think about virtual images?
0
Concept of Real and Virtual Images
0
Convex lens in our Eyes