What is exactly an ‘virtual object’? (From the point of view of lens maker’s formula)

Here’s an image from my textbook

It shows, how an image is obtained from a convex lens. The second and the third images, shows in depth , that how a convex lens behaves.

They say, that suppose ( in figure 2 ) the light ray enters the lens from the interface N1 B C. This forms a virtual image I1. Now this virtual image acts like an object for the second interface, and thus forms a real image at I ( figure 3 ) .

What is this virtual object? How can rays come from this virtual object towards the lens, from the right , and again the image is formed at the right hand side. This is possible only in concave lenses and in convex lenses when the object is between P and F. But neither of the cases apply here. What is it actually?

WHY do we treat this as an ‘object’ even when it does not exist?

PS- I know we do this with plane mirrors and others too, but thats reasonable there but here, the object and the image are on the same side! So whats it?

A virtual object is a convenient fiction that you'd introduce when you need a source of converging light that would allow you to analyze part of your system in isolation. You can think of it as a light attractor.

Generally when analyzing a system, you'll use the term "object" when you need a source of rays/photons as the "input" to your analysis.

A "real object" is simple. It creates or scatters light from a location where something actually is. So it is a source of diverging light.

But sometimes, say when you're analyzing just the right lens surface in your figure in isolation, what you really want to set up the problem conveniently is a source of converging light. Basically a light attractor that creates the conditions to where light is converging to a location.

Such a thing doesn't exist, but like with a virtual image, where an optical system such as a mirror is required to make it appear as if light is diverging from a point that no photons ever pass through, with an optical system, you can set up conditions so that light is converging to a point. That is what the left side of the lens does in your figure. Rather than consider the full system, you can analyze just the right side by introducing a virtual object as a source of converging light. 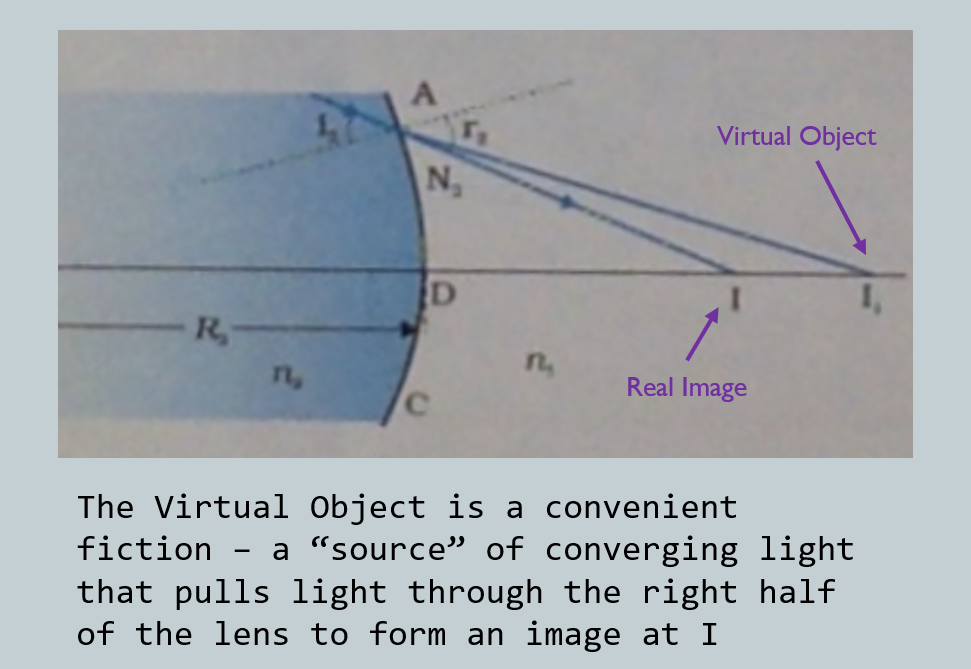 The idea is that a virtual image is an image that is not real image. To put it more concretely, a true image can be put on a screen. For example, if there is real image behind a lens, putting a white screen on that location will show the image.

A virtual image is an image because it is obtained the same way, but virtual in the sense that putting a white screen on the location will show no image. Hence the term "virtual" image. This definition is very physical.

We know that if the ray was allowed to move straight after the first refraction, an image at I1 will have been formed But it suffers another refraction and image i is formed.

Now, what will happen if we place an object at I? Light retraces its path so it will emerge anti parallel to that of the path towards i1 Thus a virtual image will be formed at i1 So if an object is placed at i, an image is formed at i1 Since the refraction formulae for curved surfaces does not change anyhow if u&vare replaced (N1/u__N2/v=N1_N2÷R) as it is symmetric therefore We can equally say that if object is assumed at I1 image at I will be formed

43
Virtual vs Real image
1
Can a virtual object be on the same side of the image?

4
How can a lens combination take the image of the first lens as a virtual object for the second lens?
1
Does the position of the final image in a multiple lens system found by the thin lens formula always agree with the ray diagrams?
3
Why don't spectacles form these weird images?
1
How do we distinguish virtual images?
2
Seeing virtual image in convex lens of object kept beyond focal point
1
How to think about virtual images?
0
Why does a converging lens create an upside down virtual image with an object further than the focal point?
0
What is the proof that we can use virtual object to know the place of formation of image in case of convex/concave lens?