How are particles produced in accelerators?

Let's take, for example, a proton-proton circular collider. Protons are accelerated to the nominal energy and then they collide head-on in the interaction point. In order to figure out what particles could be produced in the $pp$ collisions, one must take into account the internal structure of the proton. E.g. we can have gluon fusion, we can have $q\overline{q}$ interacting and producing a boson, and so on.

But from a QFT perspective, I often hear that it is all about exciting the quantum fields. The idea is the following: each particle is in fact an excitation of a quantum field, so in order to produce that particle, one just have to provide enough energy to excite that field. In this picture, a Higgs boson was produced because enough energy was provided, so that an excitation was produced in the Higgs field. But does that have anything to do with the actual particles that are colliding in the interaction point?

This is a candidate for a Higgs to two gamma: 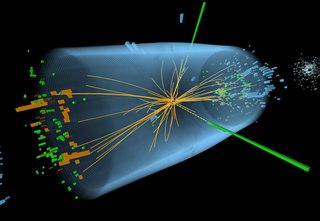 Candidate Higgs boson event from collisions between protons in the CMS detector on the LHC. From the collision at the centre, the particle decays into two photons (dashed yellow lines and green towers) (Image: CMS/CERN)

But from a QFT perspective, I often hear that it is all about exciting the quantum fields

Sure, but all that QFT mathematics is happening at the point you see where all the tracks are coming out, including the two gamma whose invariant mass falls within the measurement error of the Higgs mass in this experiment.

a Higgs boson was produced because enough energy was provided, so that an excitation was produced in the Higgs field. But does that have anything to do with the actual particles that are colliding in the interaction point?

The incoming protons are the real particles entering the feynman diagram of the Higgs into two gamma production, i.e. provide the energy needed to excite the Higgs field. This event may or may not be a Higgs, depending on the crossection measured, i.e. a statistically large number of such events that can be fitted with a monte carlo background that will allow for the discovery of an excess, an enhancement on the higgs. 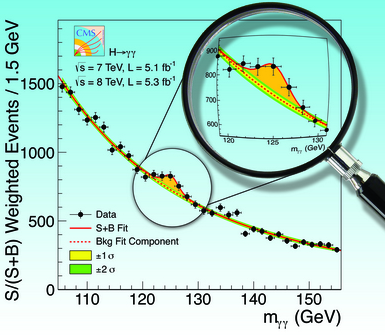 It mostly does not matter which particles collide, but they do influence the outcome a little. This is to do with conservation laws.

Mostly the colliding particles bring energy. When enough energy is focused to a small enough region of space, then all the quantum fields can in principle acquire some excitation, and all sorts of particles get formed. A veritable zoo of particles comes rushing out of the collision centre. However, things like electric charge, and lepton number, and angular momentum, and other numbers are conserved. So for example if there are two incoming particles with charge $+1$ each (like protons) then the total electric charge of all the products will be $+2$. So this influences the possible outcomes a bit. You will never get only electrons from a collision of protons, for example.

In QFT it's really the same physical story, just expressed differently. I'm not sure how much mathematical background you have, so I'll avoid equations, but if you want me to be more explicit, I'll edit the answer.

QFT is based on the concept of second quantization, which is what you refer to as exciting the quantum fields: just like a guitar string can be excited, so can the fundamental field of a particular particle species. Each such excitation is said to be a quantum of the field, and this quantum is what we call a particle. These fields can interact, and just like in regular QM or even classical mechanics, these interactions are expressed as terms in the Lagrangian/Hamiltonian of the theory. Basically, you can just think of this excitation, i.e. a particle, as propagating through space, “hitting” some other excitation of the same or a different field, and as a result exciting other quanta of various fields.

Now, if you want to calculate the probability amplitude of a set of particles being converted to some other set of particles through a collision, you'd compute the matrix element between the in state of the incoming particles (e.g. two protons) and the out state of the resulting particles, sandwiching the time evolution operator. If your fields can interact, i.e. some appropriate interaction terms appear in your theory, you may have a nonzero matrix element between them, which would mean that you will sometimes see the those particles coming out of the collision.

So like I said, physically it's the same story as what you have in mind with gluon fusion etc. QFT is really just the appropriate framework for doing such calculations, because it's manifestly relativistic (so you don't need to worry about causality) and utilizes the useful concept of second quantization, i.e. creation and annihilation of particles as excitation of the corresponding field.

Not the answer you're looking for? Browse other questions tagged particle-physics particle-accelerators or ask your own question.

2
Feynman diagram for $\overline{K}\,\!^0$ antimeson production on the quark-level
0
Does elementary particle emit photon?
1
How many electrons are there – quantum-wise?
1
How are new particles theorized and proven to exist?
5
How are anti quarks produced in $pp$ collision at LHC?
0
How is the higgs field excited to give a Higgs boson?
1
How are scalar fields = particles?
13
How are paths of particles tracked in particle accelerators?
9
What exactly do we observe in particle accelerators that we have named "particles"?