How are paths of particles tracked in particle accelerators?

I was wondering how they track the particles in particle accelerators that allow them to create images like this: http://www.supraconductivite.fr/media/images/Applications/image036.jpg

At 27:50 into this video: https://www.videoportal.uni-freiburg.de/video/The-Quantum-Veil-of-Ignorance-Fundamental-Limits-to-our-Knowledge-about-the-Microscopic-World/e44f3f03a5f092ef4dee71269d5251c3

He says that the path of particles is unknown. And in the double slit, the position of photons is said to not be known until they hit the screen at the back, when its wave function collapses.

My question is, how do the images we see from particle accelerators get made, then? How is the path of particles in photon detectors observed?

I searched and found this article: https://science.howstuffworks.com/how-track-particles-lhc.htm

"One of the detectors is actually called a tracking device, and it really does allow the physicists to "see" the path that the particles took after colliding. Of course, what they're seeing is graphical representation of the particle's track. As the particles move through the tracking device, electrical signals are recorded and then translated to a computer model. Calorimeter detectors also stop and absorb a particle to measure its energy, and radiation is also used to further measure its energy and mass, thus narrowing down a particular particle's identity."

I don't know if this answers the core of what I'm confused about though, which would be how these "tracking devices" work. How can you track the paths of these particles, without interfering with the particle, or destroying it? Do these particles emit an electric field as they travel, allowing their paths to be traced with "electric signals" as this article states?

Are they tracking the particles continuously throughout their path, or do they track them at intermittent points, and the images are based on interpolating the motion in between the detection points?

Or, are these images just artist illustrations, interpretations of what's going on, and they aren't actually able to track the paths of individual particles in real time as the images imply?

How can you track the paths of these particles, without interfering with the particle, or destroying it?

You don't. In fact, the paths are not "natural", they are being created as part of the measurement process.

Basically the detectors rely on the particles having so much energy that they will not be disturbed too much by the interactions with whatever they are using to detect them. There are any number of ways to do the detection itself, but most of them rely on some sort of hyper-sensitive state that the passage of a charged particle will upset.

For instance, in the bubble chamber, liquid hydrogen is put in a critical state. When a charged particle travels through it, the rapid passage of charge ionizes the hydrogen, which causes a bubble to form. The bubble is large enough that you can photograph it. The particle is slowed by the interaction, but that's ok.

Now we have to identify that particle. Normally the way that is accomplished is by putting the chamber within a really powerful magnet. The magnet will interact with the charged particle and cause it to curve around into a circle. The radius of that circle is defined by the charge (which is generally 1 in these cases) and the mass of the particle. So by measuring the radius you can figure out the mass and thus identify the particle.

Look at the first image you posted. Do you see a series of circles right near the middle? That's a single particle. When it was first split off, in the reaction in the center, it was travelling to the left. The magnet pulled it around into a clockwise circle. As it was moving in the circle it was reacting with whatever detector was being used, and losing energy. So that's why the circles get smaller and smaller.

You'll also notice lines that look perfectly straight or are very slightly curved. These are all curving, just so little that they look straight. That means the magnet is not effecting their path as much, which generally means they are heavier (as opposed to having less charge).

There's all sorts of actual detector systems, but generally they all work something like this. You can even use photographic film as the detector, which used to be quite common. There are systems that look for the tiny amount of electricity created when a particle passes, ones that use scintillation of a crystal, all sorts of different concepts, but in the end they all work basically the same way in trying to identify what's happening.

This is an illustration of a slice of the CMS detector at CERN, which gives finaly the images for single proton proton interactions at the center of the detector. 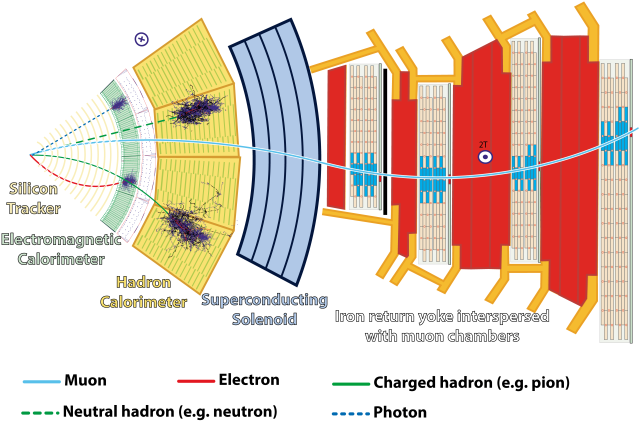 The real size of the detector can be seen here.

A series of different detectors make up the CMS detector. All charged tracks interact with the electromagnetic interaction with the material of the detector, leaving a footprint.

Startinc from the left, the silicon tracker sees charged particles in the magnetic field , with a minimum of matter in the way, so that neutrals will not interact there and not much energy and momentum is lost by the charged leaving their track. It is like a series of points. Gammas are caught by the electromagnetic calorimeter, hadrons charged and neutral , end up all their energy in the hadron calorimeter, the weakly interacting muons get through a lot of mass, as seen in the illustration.

All data are excitations recorded by thousands of electronic components . The map of their geometry is in the computer, so that tracks can be reconstructed from the points in the silicon tracker, the energy deposited measured is measured in the calorimeters. All these data identify one proton proton scatter, one event. The accumulation of events allows the study of the interaction of proton on proton , to be compared with theoretical models.

The record of the path taken by particles of one such event is reconstructed in the reference you give.

I will separate my answer in two parts: photon tracks, and massive particles tracks.

But first, particles path are always reconstructed, with more or less precision. It is not possible to have a continuous measurement of the tracks. Also, tracks are usefull but ultimatly you are more interested in the momentum of particles.

As you said, you can't detect a photon without destroying it. So the origin of the photon must be known. It is done in the analysis, by knowing other particles and there decay/interactions. If a photon detection match in time, position, and can come from an interaction point, you can reconstruct the path of the photon (which is linear, so the origin and end point is enough).

These can interact with matter without being destroyed or stopped. The particle deposit a small amount of its energy in the detector, and by a process, this energy produce a signal in a position sensitive detector. If you have N layers of detectors, you may have N points which you use to get an image of the track. These detectors can be "gaseous", for example GEM or Micromégas or Multi-Wire chamber, or made with silicium, I'm not expert on these ones. There is others position sensitive detectors but I'm not familiar with those.

EXCEPTION: I said you can't see the tracks, but there is one device that can produce continuous visible tracks of particle (except photons), the bubble chamber.

I hope it make it more clear how particles are detected, and what is the difference between detecting photons and others particles.

Not the answer you're looking for? Browse other questions tagged quantum-mechanics particle-physics experimental-physics particle-accelerators or ask your own question.

2
What do objects mean in CERN's collision visualisation?