Optical explanation of images of stars?

Very often when viewing pictures of the cosmos taken by telescopes, one can observe that larger/brighter stars do not appear precisely as points/circles on the image. Indeed, the brighter the light from star, the more we see this effect of four perpendicular rays "shooting" out from the star. 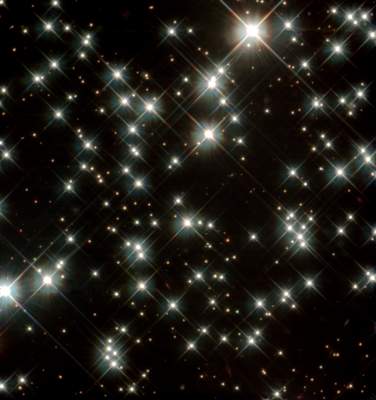 (Taken from this page.)

My question is: what are the optics responsible for this effect? I would suppose that both the hazy glow around the stars and the rays shooting outwards are optical effects created by the camera/imaging device, but really can't surmise any more than that. (The fact that the rays are all aligned supports this, for one.) A proper justification, in terms of (geometrical?) optics for both the glow and the rays would be much appreciated.

Here are a few other examples of such images:

This is, as Lubos mentioned, an effect of the wave nature of light, and cannot be explained using geometrical optics.

Where $J_1$ is the order 1 bessel function of the first kind.

However, most modern telescopes are built with reflective optics, and there are various obscurations in the pupil due to the structures that support the secondary mirror. This more complicated pupil shape can produce a variety of artifacts in the PSF. The starburst pattern in your example images could be due to a simple "plus" shaped structure supporting the secondary mirror, but the effect is so strong that I suspect it was emphasized for creative effect. I'm not sure how the Hubble PSF looks, off the top of my head.

In general, an image can be represented by the convolution of the ideal image $g(x,y)$ with the PSF, usually denoted $h(x,y)$. In the case of a point source (so $g(x,y)$ is a delta function, $\delta(x,y)$) it is trivial that the image is a copy of the PSF:

But in the case of a more complicated object, the convolution by the PSF acts to smooth or blur the image. This is why an out of focus camera produces blurry images. Although aberrations also degrade the image under a geometrical approximation, this is more accurate. The geometrical case and the wave optics (diffraction) result will become closer as the aberrations become large.

Sometimes this effect is produced intentionally. You can actually buy filters for commercial cameras that have a fine grid of wires to produce this starburst effect for creative purposes.

NB: This answer ignores any discussion of phase effects in diffraction (because I'm short on time, I may update later). If you would like to learn about diffraction and the wave optics approach to imaging, the leading text on the planet is "Introduction to Fourier Optics" by J. Goodman. It is an absolutely spectacular book.

a great question. These crosses around the stars are called "diffraction spikes". They emerge because of wave properties of light - interference around rods that have to be inserted into the reflective telescope. See e.g.

All the best Lubos

These optical effects of course have nothing to do with the size of stars. Until recently the size of a star could not be imaged on a photoplate or CCD. An image can have diffraction effects from the aperture and other optical elements. However, these are not directly related to the size of a star and our estimates on stellar diameters.

I included this to illustrate something related to this issue, and to iclear a common misconception about how images of stars are often thought to convey direct information about their sizes.

There is a really nice paper on how they fixed the Hubble Space Telescope. They shifted the CCD by small amounts and captured several different images of the point spread function (which was quite bad at the time). Then they propagated their measurement back into the plane of the mirror and were able to determine the phase error and locate the original manufacturing problem.

This enabled to fix the telescope by installing a correction mirror.

Some nice animation on the work they do for the new telescope: http://www.optics.rochester.edu/workgroups/fienup/Tom/tom_research.html

Not the answer you're looking for? Browse other questions tagged optics astronomy waves imaging or ask your own question.

1
What aberration causes the common "cross pattern" in astronomy images?
2
How can light appear to spread in mainly a few rays (e.g: 2,4)?
0
Images of sun/stars/spaceship show rays
1
How do stars look like from space?
11
What causes blurriness in an optical system?
0
Distances between stars and their sizes