Numerical simulation of the double-slit experiment including watching the electrons

The double-slit "thought experiment" described by Feynman in Lectures on Physics Volume 3 section I-6 Watching the electrons consists in firing electrons through a double-slit to observe the interference of electron waves, and watching them after passing the slits with a light source placed behind the double-slit, at equal distance of each slit. As electric charges scatter light, one can "detect" which slit the electron went through if the photon wavelength is small enough.

Question: has this "thought experiment" been simulated by solving numerically the underlying Schrödinger equation? I am aware about numerical experiments of the double-slit, but did not find any including the interaction between the electrons and the photons just after the double-slit.

The numerical simulation can address other types of particles (replacing for example the photon by a slow electron to avoid relativistic equations), the crucial point being the simulation of the observation (here the photons being scattered by the electrons) and its effect on the wavefunction. Its interest could be in particular to better understand in which precise way the observation progressively becomes inoperative when the photon wavelength increases.

I'll pull my remarks from the (now migrated) comment thread in, since this has yet to be properly addressed. To answer your main question,

has this "thought experiment" been simulated by solving numerically the underlying Schrödinger equation?

Now, the reason for the above is that the simulation you propose just isn't very interesting. You say that

Its interest could be in particular to better understand in which precise way the observation progressively becomes inoperative when the photon wavelength increases.

but that is not the case: anything that such a simulation could show us, we already understand.

It is well understood, since the days of von Neumann, that within formal, unitary quantum mechanics, the effect of measurements is to cause entanglement: if the system is in a superposition of $|A=1\rangle$ and $|A=2\rangle$, say, and you measure $\hat A$, with some detector that goes to $\left|\uparrow\right>$ on $A=1$ and to $\left|\downarrow\right>$ on $A=2$, what you're really generating is the superposition $$ |\Psi\rangle = \alpha \left|A=1\right>\left|\uparrow\right> + \beta \left|A=2\right>\left|\downarrow\right>, $$ i.e. an entangled state between the system and the detector. This state can no longer show interference, because if you take the inner product between the two components, i.e. if you do $$ \bigg< \left|A=1\right>\left|\uparrow\right> ,\, \left|A=2\right>\left|\downarrow\right> \bigg> = \left<A=1|A=2\right> \left<\uparrow\middle|\downarrow\right> = 0 $$ you get zero, because the detector states are orthogonal. This completely kills any chance of interference, but the wavefunction hasn't "collapsed" (yet); if you do a projective measurement on the detector (forcing its wavefunction to "collapse", whatever that means), that extends to the system as well, but that is external to the simulation.

Let me reiterate the point: anything you could simulate, while keeping to unitary quantum mechanics, would completely fit within the scheme above, and it would not add to our understanding of the thought experiment.

If you do want your simulation to include some form of wavefunction "collapse" (or decoherence or whatever you want to call it), i.e. if you want your simulation to actually say anything useful about the measurement problem, then you're going to need to decide how you handle the information encoded in your which-way detector, and this is where your scheme goes south: in order to simulate anything at all, you essentially need to pre-bake some resolution of the measurement problem into your simulation. Whatever results you get back will just be a restatement of the premises you feed in, and will be subject to all the flaws of the premises.

Given this, all that such a simulation would provide is a very expensive visualization aid for processes that can already be understood analytically, and for which the main difficulty is conceptual. The creation of visualization aids is not without merit, but this one would offer very little towards the resolution of the true conceptual problems of the measurement problem, which have much more to do with what projective measurements mean than with photons and double slits.

The loss of interference is not due to collapse because collapse is a myth.

The loss of interference can be simulated by quantum mechanical models that include the interaction that transfers information about the measured system, which cause decoherence. These papers are not specifically about decoherence in electrons but they are about decoherence in general double slit type experiments

There are papers about dehoherence of electrons specifically in electronic Mach-Zehnder interferometers. These are a couple of samples of a very large literature on the topic:

Everett, in his "Relative State" paper, showed that in fact it can be derived from the Schrödinger equation, although you have to include the observer in your wave equation. This leads to the Many Worlds interpretation of quantum mechanics.

What Feynman is talking about is the "wave function collapse" which is due to measurement.

Consider, you could observe the electrons without actually disturbing the state of it (purely hypothetical). Even, in that situation there occurs the collapse of the wave function. Now, you could actually see which slit the electrons pass from. Thus, you will observe no interference pattern on the screen. 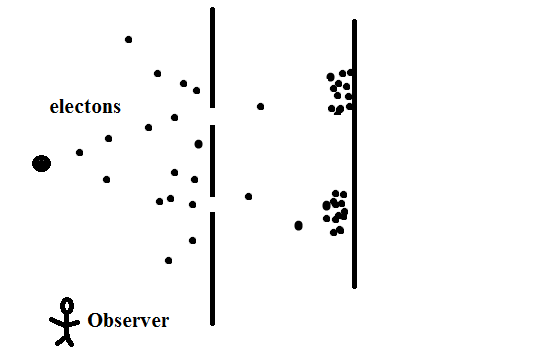 The picture shows what happens in the case. Please know this is a purely hypothetical situation. I just want to show the wave function collapses with any types of measurement.

The double-slit "thought experiment" ... consists in firing electrons through a double-slit ... and watching them after passing the slits with a light source placed behind the double-slit...

To generalize this it is said that any interaction with the electron changes its straight path of movement.

As electric charges scatter light, one can "detect" which slit the electron went through...

What else can deflect electrons from their path? Moving electrons could be influenced by EM radiation as well as by electric and magnetic fields. For magnetic fields this is described by the Lorentz force. The mentioned by you "Numerical Simulation of the Double Slit Interference with Ultracold Atoms" consists a lot of calculations Before the slits and Behind the slits. But what is about calculations of the electrons interaction With the slit or With the edges of the slit?

It is a strange thing that there has to be or better there is an interaction between the moving through the slit particles and the slits edges but this interaction is not an object of consideration.

Just my two cents, it has to be calculated the interaction between the moving particles and the magnetic and electric fields of the surface electrons of the (sharp) edges. Then it could be explained easily that an intensity distribution happens even behind single (sharp) edges and even over time with one by one moving particles.

Numerical simulation of the double-slit experiment including watching the electrons ...

... in their interaction with the slit seems to be the right way to bring the endless discussions of double slit experiments to a good end.