This is something that has confused me whenever I read about the double-slit experiment.

When the double-slit experiment is performed, I understand that the resulting pattern for the sequentially fired photons will be an interference pattern, unless the path of the photon is observed or measured, in which case the resulting pattern will be that of a particle i.e. like firing tiny marbles through.

Edit: Wow what a great response. Thanks all you who took the time to contribute an answer, it is certainly appreciated.

What I have taken away from this is that the pattern produced on the screen is an observation / interaction that causes the photon to 'localise' as is the observation of the photon as it passes through the slits.

The differentiation is one of chronology - the observation or inference of exactly which slit the photon passed through causes the photon to localise before passing through and so it behaves like a particle. Observing the photon after passing through the slits in a way that does not reveal which particular slit it passed through, localises the electron according to the wavefunction complete with interference caused by the slits.

The key difference then is at what point the photon is observed / interacted with and therefore localised - either close enough to the slits to reveal which slit it passed through, or far enough such that it remains uncertain. The former will produce the two bar pattern, the latter the interference pattern.

Whenever you interact with this wavefunction you change it, and typically you will change it in such a way as to localise it. This is because the interaction happens at a point, and the result is to localise the photon at that point.

Now, when the photon interacts with the screen this does happen at a point, and indeed the interaction creates a spot on the photographic film/CCD/whatever at the point where the interaction happened. We can't say in advance where the interaction will occur, only that the probability of it happening is given by the wavefunction. So any one photon interacts at a point, but when we take many photons the points where they interact with the screen are distributed according to the wavefunction and together they build up the interference pattern.

As John says, one photon gives one hit. If one thinks of a classical ball thrown at two slits the slit size of the order of magnitude of the ball size, the balls thrown aiming perpendicular to the slits location, one would get hits on a screen of two types:

2) the ball grazes the side of the slit it is passing symmetrically, scattering at an angle, and finally the balls make two blos as an image of the slits.

The effect would be two individual spread blobs with no interference pattern but an overlap region between them. Picking an individual hit of a ball on the screen on the edges can trace the track of the ball to the nearest slit but the individual hits in the middle could come from either slit; of course all this depending on the exact geometry.

Look at this individual electrons ( individual hits from photons are a more difficult experiment) hitting the screen:

Note the randomness of the pattern. Extrapolating the dots on the screen back to the two slits, either slit could be the source, there can be no unique track identification unless a detector(i.e an interaction as John explains) intervenes close to the slits after the particle passes through, and this would change the wavefunction.

Have a look at this experiment that clarifies how interactions change the probabilities for the path of the particle going through.

Use the pilot-wave metaphor

The pilot-wave picture is the best way to somebody (non-physicist) understand the double-slit experiment, as a typical photon scattering experiment. You can see the pattern construction (at @annav's answer) imagining that each photon can go its path-way as particle, after a little (harmonic-randomic) oscillation in the slit. 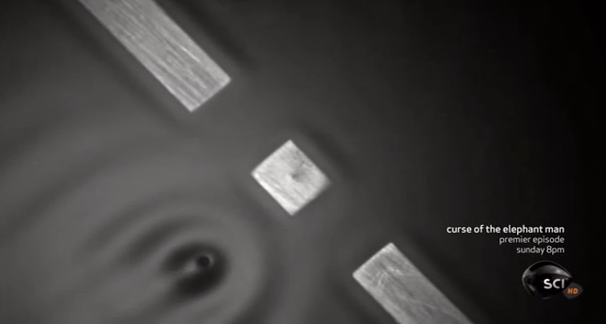 See this good 2-minut-movie for a complete illustration, or more theoretic details or references at Wikipedia's Pilot-wave article.

This idea seems to me so natural and simple, to resolve the wave-particle dilemma in such a clear and ordinary way, that it is a great mystery to me that it was so generally ignored

We not need to say "the photon goes through both slits": is a personal choice, what methaphor you like, what metaphor makes more sense for you. Bell preffer the wave-pilot picture, @JohnRennie preffer the mainstream's view.

The question is inconplete, is not an univeral "Why", is contextual:

There are two views, where the intuition changes. Only intuitions, because there are no mensurable evidence for one or another view. We are free to do our choices: one choice makes the unspeakable more speakable.

Moving the observation screen as close as possible to the slits, one will observe electrons as particles and never as wave distributions. The explanation that electrons interfere with itself is a interpretation, based on the intensity distribution on the observation screen. This interpretation is saved by the fact, that any measurement of the position of the electrons disturb their intensity pattern on the screen. So never the waves were observed direct.

My explanation is an other. The surface electrons from an edge, as well as from a slit or from a double slit, form together with the incoming electron as well as with a photon a common field. This field is quantized and what we see on the screen is the quantized field. This interpretation seems me more natural. It explains the intensity distribution of single particles behind a single edge as well as behind double slits.

See this question too.

That's because knowing the position of a dot on the screen does not allow you to tell which slit the photon passed through.

If you, say, used colour film and put filters over the slits, so that you'd have a red dot when the photon went through one slit and a green dot if it went through the other, that would count as an observation, and the interference pattern would disappear.

27
Has a double slit experiment ever been done using a track chamber or even contemplated?
5
Isn't the 'slit' in a double-slit experiment also a wave?