Suppose I have a double double slit experiment. That is, I have an electron gun in the center, that shoots entangled pairs of electrons in opposite directions, one to each double slit. I tried to portray the situation in the following image: 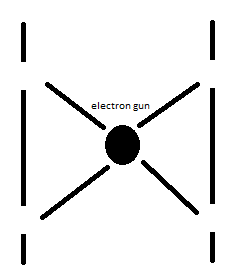 Since the electrons are entangled, determining the slit through which the electron on the right goes, fixes the slit through which the electron on the left went. From what I know of quantum mechanics, I think that placing a measuring device on the slits on the right, destroys the interference pattern on both double-slits. I find this very unintuitive, even more so than the classical EPR thought experiment, because there is a directly observable effect. You can see the interference pattern disappear on the left after placing the detectors on the right.

Am I correct? Does determining the slit through which the electron on the right went destroy the interference pattern on the left?

I think the experiment you are proposing is not possible in the way you want it.

But in order to make this statement you have to make a moemntum measurement on the initial state, i.e. know that the total momentum is zero with a certain $\Delta p$. But then, by means of the uncertainty relation, you only know the position where the photons were emitted with an uncertainty $\Delta x \propto (\Delta p)^{-1}$.

Now you can have two scenarios: Either your double-slit is small enough and far enough away that due to the uncertainties $\Delta p$ and $\Delta x$ you do not know through which slit your photon goes. Or you still can tell (with some certainty).

In the second case there will never be an interference pattern. So no need for entanglement to destroy it.

But in the first case, due to the uncertainty $\Delta x$, measuring the position (by determining which slit your photon takes) does not give you an answer about the entangled photons position that is certain enough to tell which slit it will go through. Therefore you will see interference on both sides.

So an EPR like measurement is not possible in the experimental setup you propose. I would assume that in general you need commuting observables, like spin and position in the Stern-Gerlach experiment, in order to measure EPR. But I didn't think that through yet.

It is actually not important to have space and momentum for this. Just take any non-commuting observables A and B, say with eigenstates A+, A-, B+, B-, and take two states S1 and S2 that are entangled in A. So measuring S1 in A+ implies S2 in A- and vice versa. But what you want is measure if S1 is in B+ or B- and from this conclude if S2 is in B+ or B-. And since A and B do not commute, measuring B with some certainty gives you a high uncertainty on A, meaning, for knowing if S1 is in B+ or B- you completely loose the information if it is in A+ or A-. So you cannot say anything about S2. On the other hand, as long as you are still in an eigenstate of A and know what to expect for the A measurement of S2, you don't know anything about the result of the B measurement.

So in order to do an EPR experiment you need entanglement in the observable you measure or an observable that commutes with it.

Please tell me if my thoughts are wrong.

I addressed this question at length in this paper and this presentation. The TL;DR is that entanglement and measurement are the same physical phenomenon. When you send an entangled particle through a two-slit experiment it already has had its interference destroyed in exactly the same way and by exactly the same physical mechanism as measuring the particle would destroy the interference.