Consider a copper atom. If you place an electron near it, the protons in the nucleus would attract it like they attract the existing electron in the valence shell. However the electron you placed beside it won't join the copper atom because adding an electron to its shell wouldn't make the atom any more stable.

But why doesn't the electron join the atom? I understand that it would make the atom less stable, but isn't the nucleus still attracting it?

If the reason is that some other force repels the other electron since it makes the atom less stable, why doesn't this same force repel the current electron in the valence shell out of the atom since this would make the atom more stable?

The system we have here is immensely complicated: a ball of protons and neutrons surrounded by 29 electrons, each interacting with the other and with the nucleus, according to the laws of quantum mechanics. A proper explanation is the kind of thing you need to take a theoretical chemistry degree to get to grips with.

But perhaps I can give you some intuition for the situation.

Now suppose we had a copper ion, Cu$^+$, and we placed an electron next to it (in a vacuum, as before). In this case, there is an attraction from the nucleus, with its +29 charge, as well as a repulsion from the 28 electrons. Now, the fact that there is one fewer electron than before is crucial, because it means the net attraction on the loose electron is much higher, and as such it's going to be very happy to associate with the copper ion to form neutral copper. The system is fairly stable, and the reason is that whilst there is a repulsion on the electron from the other 28 electrons, the 29 protons safely outweigh it.

$^1$ The reason the forces don't exactly cancel out is because the electrons and the protons are in different places. For instance, some of the electrons are going to be on the other side of the nucleus to the loose electron, and because the electric force gets weaker with distance, this means that they are going to exert less force on our electron than the protons in the nucleus. It's not at all trivial to see what the net effect will be (after all, there are also some electrons that are nearer to our loose electron than the nucleus is) but if you do the calculations, you will find that there is an overall attraction, as I said.

The answer by @gl255 is qualitatively correct. I want to clarify though that at the level of single atoms the overwhelming experimental evidence is that Quantum Mechanics describes the data, and not classical electromagnetism which is correct macroscopically.

What happens in the many body problem of 29 protons and 29 electrons is that the quantum mechanical solution of this state shows specific energy levels that are filled up by the 29 electrons to form a stable atom, where a large quantum of energy ( photon scatter) is necessary to be applied in order to kick out the last electron from its orbital. All the lower atomic levels are filled up and there is no energy level for the last electron to fall down to, nearer to the positive nucleus.

Now if one looks at the mathematics, some of these elecgtron orbitals have large distortions from spherical symmetry 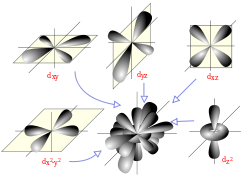 This distortion mathematically is the same as dipole, quadrupole and higher moments, and generates a spill over field in one direction of the negative charges which does allow attraction of positive and repulsion of negative charges , and vice verso in an other direction, i.e. the positive field of the nucleus will spill over in that direction. These are called the Van der Waals forces and are responsible for all chemistry, solid state forms ( like crystal structure) and macroscopic electrostatic behavior in general. They are a higher level potential setup, that has again a quantum mechanical solution, some of them for some atoms extremely stable, crystal structure with its order the most dramatic one.

a) the extra electron feels a very weak field compared to the last bound electron which is in a quantized state.

b) the last bound electron is in a stable quantum mechanical orbit that needs a specific quantum of energy to be moved out of the atom.

c)the lower atomic levels are filled up and there is no energy level for the last electron to fall down to, nearer to the positive nucleus.

As one gets further away from the nucleus, the "pull" exerted by the nucleus on the electron gets smaller. This should be pretty intuitive - by analogy, a magnet wont pull towards the fridge if you hold it a foot away. In addition, electrons exert a repelling force against each other - the same force you feel if you try to stick together two magnets with the same charges.

The placed electron would not join the atom because of its distance from the nucleus and the amount of electrons between it and the nucleus. Because it's relatively far away from the nucleus, there is not much force pulling it in. There are also quite a few electrons already in the atom, so the force repelling it outweighs the force attracting it.

Not the answer you're looking for? Browse other questions tagged electromagnetism atoms physical-chemistry atomic-physics or ask your own question.

3
Does there exist electric field around all the substances?

50
Why do electrons occupy the space around nuclei, and not collide with them?
60
What enables protons to give new properties to an atom every time one is added?
21
How is silver a better conductor than platinum?
4
What keeps quarks separate (strong force pulls, but what repels to equal out)
6
Can a nucleus (made of neutrons) exist without an EM field?
3
In chemical compounds, where does the “magic” come from in atomic “magic numbers”?
0
Shielding effect to valence electrons
0
Can a magnet induce current in a stationary, straight copper wire?