What enables protons to give new properties to an atom every time one is added?

How does adding one more particle to the nucleus of an atom give that atom new properties? I can see how it changes it's mass, that's obvious... But how does it give that new atom different properties like color?

A good example would be: start with a copper atom (Cu), with the atomic number 29, thus Cu has 29 protons, and you add one proton to the nucleus you are left with an atom of Zinc (Zn) with the atomic number 30, thus 30 protons. The first element mentioned is a totally different color than the second, and conducts electricity better etc.

Not only protons, but neutrons, which are the same type of particle (Baryon) affect the properties of the element in a much different and much less important manner. Adding a neutron only creates an isotope of that element, not a different one all together, unlike adding a proton.

Also, it is obvious that adding (or subtracting) electrons does not make a difference. For example, if you remove 28 electrons (I know that would take huge amounts of energy, but lets ignore that) that "orbit" the copper atom, we are still left with a copper atom, although a ion, but still a copper atom.

So, its apparent that only protons play a major role in "making" elements different from each other. How and why? Also, the same can be asked about the protons themselves and quark flavor.

You are not correct in your latter part of the analysis; the chemical properties (which is mostly what matters in ordinary matter) almost only depend on the electron shell, and in particular the outermost electrons (called the valence electrons).

Why there is such a diversity of properties just by changing around the electron shell, is one of the wonders of chemistry! Due to quantum mechanics, the electrons don't simply spin around the nucleus like planets around the sun, but arrange themselves in particular, complicated patterns. By having different patterns, you can achieve a lot of different atom<->atom binding geometries, at a lot of different energies. This is what gives the diversity of chemical properties of matter (see the periodic table).

You can add or remove electrons to an atom to make the electron shells look more like the shells of another atom (with a different number of protons), but then the atom as a whole is then no longer electrically neutral, and due to the strength of the electromagnetic force, the resulting ion does not imitate the other atom type very well (I'm not a chemist - I'm sure there are properties that indeed could become similar).

Many physical properties are also mostly due to the electron shells, like photon interactions including color. Mass obviously is almost only due to the nucleus though, and I should add that in many chemical processes the mass of the atoms are important for the dynamics of processes, even if it isn't directly related to the chemical bindings.

This was just a small introduction to chemistry and nuclear physics ;)

Also, it is obvious that adding (or subtracting) electrons does not make a difference [...]

Ions of the same elements behave completely different. You just cannot have a stable lump of (say) copper ions with a color and a conductivity.

There are two processes when you add a new proton to the nucleus, aiming to get a new neutral atom:

Let's consider these two parts of the process separately. First, suppose you have an atom of californium, which has 98 protons. If you remove an electron, you'll get an ion, energy states of which will highly resemble those of berkelium, with one major difference: $\mathrm{Cf}^+$ is no longer an electrically neutral object. This means that even though single ion will behave much like $\mathrm{Bk}$ atom (i.e. its radiation and absorption spectra, spectral line intensities will be qualitatively very similar), it's not stable with respect to addition of an electron. This affects its chemical properties. The ion "wants" to acquire back its missing electron, and when it sees an atom, it tries to attract one of its electrons. The same goes further: when you remove a second electron, getting $\mathrm{Cf}^{++}$, this ion will have very similar properties to those of $\mathrm{Cm}$, but it will not be stable with respect to addition of electron, and thus interaction with other atoms and ions will also be much different.

Now what can we do to fix this instability? Of course, we have to compensate the increased total charge by removing a proton from the nucleus. After you remove a proton (and corresponding number of neutrons to prevent fission) from e.g. $\mathrm{Cf}^+$'s nucleus, you'll get nothing but already familiar $\mathrm{Bk}$ atom, which will be electrically neutral and thus not tending to acquire extra electron (at least not tending that much — bound states with extra electrons are always possible).

What is the conclusion? Simple: adding another proton to the nucleus just selects stable electron configuration from all the possible configurations. And the "default" configuration selected is what makes the atoms have so different chemical properties.

You have probably heard your teachers say that the chemical properties of an element are determined by the number of protons (also called the atomic number, also represented at $Z$). This is true in the strictest sense, but only because the number of protons of an atom dictate the way electrons will behave.

What you may not know, and this is where the physics really comes in, is that electrons can only exist with discrete (i.e. not continuous) amounts of energy. These discrete energy levels influence the types of electron shells and sub-shells that a particular element has. Furthermore, these energy levels are determined by the atomic number, $Z$, of the nucleus.

If you're still in high school or an introductory college science class, you may not quite understand the figure below quite yet. At this point, just know that the diagram represents the amount of energy an electron possesses when it occupies various energy levels. Also, notice that Hydrogen ($Z=1$) and Mercury ($Z=80$) are vastly different, and as a result, the amount of energy possessed by an electron is different as well. It's these differences in energy that give rise to a variety of properties, such as how easily an atom can be ionized (you would look at the $n=\infty$ level). Also, the emission spectra of a particular element is dictated by these energy levels, because the wavelength of emitted photons depends directly on the amount of energy released by an electron when it drops energy levels. 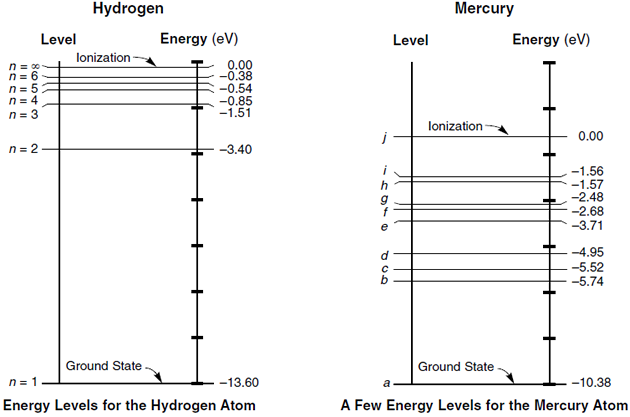 Every answer has been fantastic, but it is also worth remembering that the more massive a nucleus, the more prominent relativistic effects become on the atom. This can affect things quite greatly.

The heavier a nucleus, the faster the S-shell electrons have to move to avoid "hitting" the nucleus. These electrons become more massive due to their relative proximity to the speed of light and due to quantum effects this reduces the size of the wavefunctions for these electrons considerably. This is called 'relativistic contraction' and it becomes very important in heavier elements.

This, coupled with the way electrons are placed in shells explains many of the odder properties of some elements, including the Osmium's density, Gold's colour, and Mercury being a liquid along with others.

It should be apparent that electrons and their placements are absolutely and unavoidably integral for the identities and features of different elements. A lot of this has to do with electrons being fermions which in layman's terms means two electrons can't be in the same place at once and so shells are built around this principle and this has enormous implications for how atoms bond.

Something else pertaining to the nucleus; it should be remembered that nucleons can be, and often are treated like how electrons are, and the nucleus is actually subject to different 'shells' as well. This is called the Nuclear Shell Model, and nucleons (protons and neutrons are counted separate) are added to the lowest possible energy levels, like how electrons are. With this there are certain "magic numbers" where a shell in the nucleus is completely filled and at these levels the binding energy is particularly strong and this explains the stability of certain elements like Calcium and Tin.

One more factor: Adding protons to the nucleus increases its charge and so the attraction between the nucleus and the electrons becomes stronger. As a result the atom radius decreases which plays a role in chemical interactions. Another consequence is that now more energy is required to make the atom lose an electron.

Because of the quantum properties of electrons, in each period the atom radius increases.

Not the answer you're looking for? Browse other questions tagged atomic-physics physical-chemistry atoms protons elements or ask your own question.

0
Why are atoms so different from one an another?
1
Why are the properties of elements/atoms so varied?
1
How is gold (the element) gold (the color)?
0
Why are helium and lithium so different, while lithium and beryllium are similar?

0
Atoms and electrons?
0
Ionizing an atom with a proton
2
Does the proton wobble due to the electron's orbit in a Hydrogen atom?
0
Is a random particle in element A "interchangeable" with its counterpart in element B?
1
If we need the term/concept of "isotope", or why we call them "elements" of the periodic table
0
Why are helium and lithium so different, while lithium and beryllium are similar?