What keeps quarks separate (strong force pulls, but what repels to equal out)

We know that the strong force keeps quarks together, that is mediated by gluons (and their charge is called color charge). We know that the residual strong force keeps neutrons and protons together in the nucleus (called the nuclear force), and that is mediated by Pions (quark and anti-quark). We know that electric charge can repel (same charge) or pull (opposite charge). But I do not see anywhere if color charge can repel, i only see that it can pull. We know that protons and neutrons are stable together in a nucleus, because two forces equal out (nuclear force pulls and electric charge repels).

Since strong force (mediated by gluons) pulls quarks together, what keeps quarks separate from each other, meaning why are quarks not coming closer together and crush into each other? I only see the strong force pulling, but what is the other force, that repels here and equals out?

To start with quarks , in contrast to protons and neutrons, are not composite, they are elementary particles in the standard model of particle physics which describes the data up to now .

Here is an illustration that describes what is happening within the composite proton: 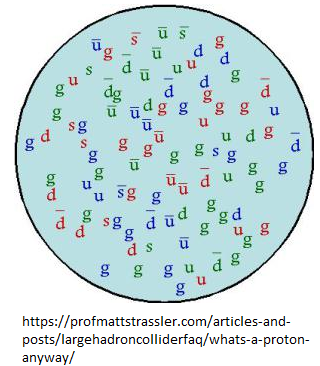 Quarks and antiquarks and gluons dance around and annihilate and pair produce in a non stop manner, so they do "overlap" in the feynman diagrams of the individual interactions, and annihilate. The three valence quarks are lost in the soup, and in any case it is a matter of conservation of quantum numbers, there should be an excess of one down and two up for the proton.

So it is not a matter of repelling, it is just that overall the quarkness up and down should add up to the valence quarks of a proton, and the same holds for the neutron two down one up excess in the soup .

I understand that in case of two Protons, two forces equal out, electric force repels, and nuclear force pulls. That is why two protons are stable in a nucleus and are not flying away and are not crushing into each other either. In case of a Neutron, there is no electric force to repel, but there is still nuclear force to pull, so a neutron is pulled together to another neutron or a proton, but what keeps the neutron from crushing into another neutron or proton?

A neutron, as well as a proton, is a bound state of QCD. As bound as a hydrogen atom. For the same reason that if you hit two hydrogen atoms on each other at low energies they remain hydrogen atoms, hitting two neutrons at low energy on each other they remain neutrons, a specific(complicated) bound state of quarks. At high energy they will create a lot of quark antiquark pairs, the same as the results seen in the LHC proton proton scatters, though baryon number conservation holds in all elementary particle interactions.

In conclusion it is not about pushing and repelling but about conserved quantum numbers and/or bound states.

In lattice QCD they assume a potential and there they can approximately solve to find masses for pions and kaons, within the limits of the model. 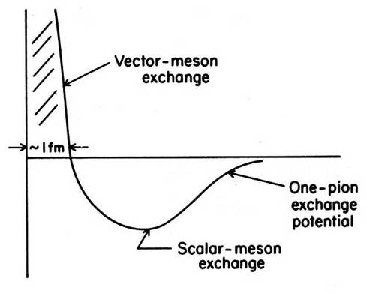 The NN potential is a residual interaction resulting from very long-range reactions between quarks in adjacent nucleons. Since the reaction is long-range, color charge (and therefore gluons) cannot be exchanged. As such, the mediators for this force are color-neutral, and consist of the lighter mesons (like $\pi$, $\rho$, and $\sigma$). Because of this, the nature of this residual interaction is completely different from the quark-level strong interaction. In particular, note the strong repulsion that happens at distances less than 1 fm (i.e. the diameter of a nucleon). This repulsion, mediated by vector-meson ($\rho$) exchange, is what keeps protons and neutrons apart.

Not the answer you're looking for? Browse other questions tagged atomic-physics quarks strong-force color-charge or ask your own question.

14
Why aren't all quarks clumped together in one giant hadron?
18
Inverse square rule for strong forces
9
Can strong interaction be repulsive?
3
Understanding interaction between two quarks
2
Does the strong force increase or decrease with aligned spins?
2
Understanding nuclear mass defect
1
Where do the mass and volume of the two quarks go when they create a meson?
0
Does quarks always pulls each other?

4
What is mass of free up and down Quark?
0
A few questions on quarks, gluons and the strong force
6
Can a nucleus (made of neutrons) exist without an EM field?
0
Difference between boundedness (electrons around nuclei) and color confinement (quarks)
2
How does the nuclear interaction keep protons and neutrons together?
0
Does quarks always pulls each other?
0
Quick question about gluons