In chemical compounds, where does the "magic" come from in atomic "magic numbers"?

It is well known that atoms with a full electron shell are more stable, it is one of the first facts taught in a middle school Chemistry course:

"An element whose atoms have no electrons outside filled energy levels is particularly stable chemically. Such elements are called noble gases"

What I do not understand is the reason for this:

"Stable chemical compounds are held together by the Coulomb attraction and are typically formed from atoms whose valence add up to zero."

What is so special about both atoms having noble gas configuration?

For the last electron in the shell we have that the potential behaves like $−Ze^{2}/r$ near the nucleus (whose charge is $+Ze$), and like $−e^{2}/r$ outside the atom, where the nuclear charge is screened by the negative charge of Z − 1 electrons, then the potential away from the atom (with $\text{no. of electrons}=Z$) should be zero. And for example, taking away an electron would increase the energy, as it would require work in order to take it out of the potential. There would also be no attraction to bind an extra electron outside the atom.

As far as I understand the mechanism through which these atoms would bind together is to first ionize and then let Coulomb attraction join them. For concreteness let us assume $NaCl$:

I know that for these elements the ionization energy may be small, but the energy for the non-ions should still be lower and thus they should be more stable, but this is not the case. My question would boil down to: Why do they stay together? Why not just snatch away the electron from the other ion and go their own ways?

It is always good to remember the historical context. The statement

An element whose atoms have no electrons outside filled energy levels is particularly stable chemically. Such elements are called noble gases.

confuses the phenomenon with the conclusion. The story was the following:

=> It was and is until today a empirical fact, that elements with 2, 8 and again 8 electrons fill shells in a way, that these shells are particularly stable chemically.

Stable chemical compounds formed from atoms whose valence add up to zero. What is so special about both atoms having noble gas configuration?

In a nutshell (again from Wikipedia):

=> All explanations and conclusions are based on the chemical stability of Nobel gases. There is no explanation why Nobel gas atoms have 2, 8 and again 8 electrons in a stable arrangement; except for the fact that there are solutions for partial differential equations which can describe the electron excitations.

Quantum mechanics solves such partial differential equations for the spherical probability for electrons by the help of spherical harmonics.

Despite their name, spherical harmonics take their simplest form in Cartesian coordinates. This leads to spherical probabilities with 2 electrons for the s-shell and 6 electrons in the p-shell 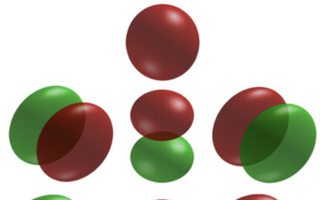 One solution correspondent with the cubical atom, proposed by Lewis:

The cubical atom was an early atomic model in which electrons were positioned at the eight corners of a cube in a non-polar atom or molecule. This theory was developed in 1902 by Gilbert N. Lewis and published in 1916 in the article "The Atom and the Molecule" and used to account for the phenomenon of valency... The figure below shows structural representations for elements of the second row of the periodic table.

The corresponding spherical harmonics is the following: 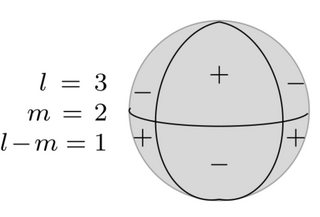 Each of the eight segments of the sphere topologically corresponds to the eight edges of a cube.

Up to this point, I have only described what science says. Since your question didn't receive enough attention, I feel free to add my own thoughts to tell you why 2 and 8 electrons in a shell are perfect balanced around a nucleus.

Based on Lewis cubical distribution of electrons and remembering, that electrons have a magnetic dipole moment, it is possibly to bring the eight outer electrons of Ne and Ar into a perfect equilibration. This is the case for 4 electrons, pointing with their north poles to the nucleus and the other 4 electrons with their south poles. For He the two electrons are directed to each other antiparallel. Did you see the correspondence to Paulis exclusion principle?

0
Atoms and electrons?
1
Should it really be called "valence *sub*shell"?
3
Can a light element with excited nucleus undergo internal conversion?
2
Why does noble gas electron configuration have low energy?
7
How does covalent bonding actually work?
6
What is the difference between the valence shell and the valence band?
0
How is the concept of binding energy linked to ionization energy?
0
Submerged shells, why are the valence electrons not in the outermost shell?