Formation of a focal point by gravitational lensing effect

Actually, the image of an object due to the gravitational lensing of a black hole (or whatever the massive lensing object may be), appears as a ring.

To get an idea why the image formed is circular, consider the following diagram:

As one can see, the star behind the lens will appear in two separate locations, in two dimensions. Now consider that in three dimensions, the star will appear at all points forming a circle going into and coming out of the page, as can be seen in this image taken by the Hubble telescope: 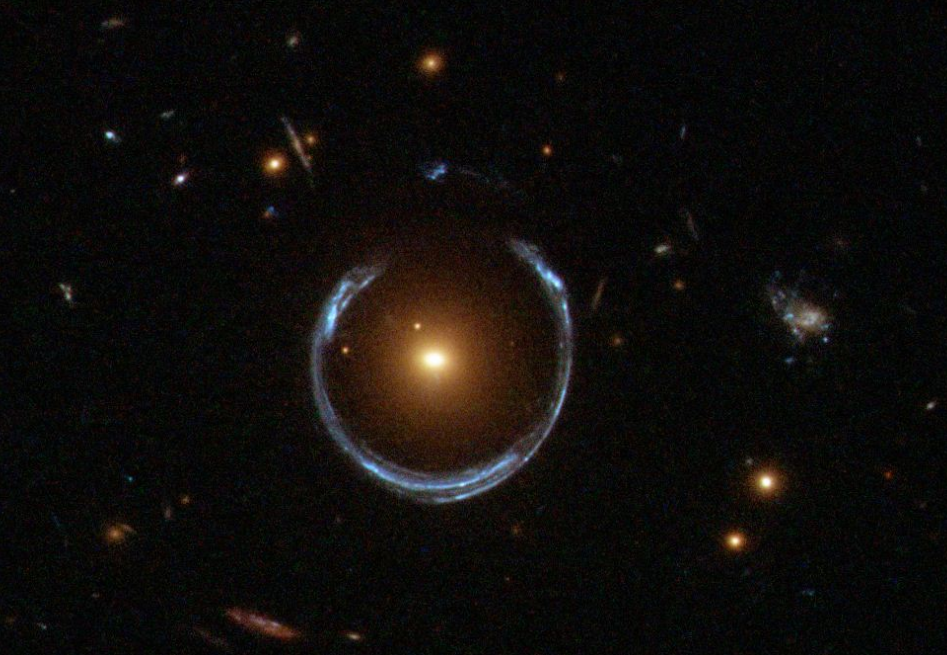 This shows the lensing object and ring image as concentric. In this image, the gravitational lens itself is a galaxy pictured in the center with the image surrounding it. These images are termed "Einstein rings". The image does not form at a single focal point as can be seen, but rather around the lens forming a ring. There are many smaller images of the distant galaxy located at all points on the ring.

From the link above:

Pictured above, the gravity of a luminous red galaxy (LRG) has gravitationally distorted the light from a much more distant blue galaxy. More typically, such light bending results in two discernible images of the distant galaxy, but here the lens alignment is so precise that the background galaxy is distorted into a horseshoe -- a nearly complete ring. Since such a lensing effect was generally predicted in some detail by Albert Einstein over 70 years ago, rings like this are now known as Einstein Rings.

So a gravitationally lensed object will not be focused at a particular point or "focal point" with an image of the object, as in the case of a standard lens. As can be seen in the images above, it's vastly different with the lens in the center, with the outer ring as the image (the image above is of a distant blue galaxy at a very large distance behind the lensing object).

In fact, the equation $$\tag 1\Delta\theta = \frac{4GM}{r c^2}$$ tells us how much massive objects deflect light in terms of the distance of the rays from the optical axis, which leads to the kinds of images we see above.

For a standard convex lens, the further we move from the center $r$, rays parallel to the axis will deflect by a greater angle, and so $$\Delta\theta\propto r$$ or $$\Delta\theta=kr$$ where in the thin lens approximation, the constant $k=\frac{1}{f}$.

But note in equation (1) we now have $r$ in the denominator. For a gravitational lens (like a blackhole), rays of light coming in parallel will not converge at the same points as we move further from the axis (the equation suggests the magnitude of the deflection is inversely proportional to $r$, or the angle decreases for parallel rays further from the center of the axis). The net effect is the formation of a ring with the lens at the center (annulus).

Not the answer you're looking for? Browse other questions tagged optics astronomy gravitational-lensing or ask your own question.

54
Do gravitational lenses have a focus point?