What is the minimum optical power detectable by human eye?

If one is in complete darkness, what is the minimum optical power that the eye can "see" (let's say in 500-600 nm range).

I found that for 510 nm, 90 photons can be detected (http://en.wikipedia.org/wiki/Absolute_threshold).

Calculating the energy for these photons and considering 150 fs pulses with 80 Mhz repetition rate, results in an average power of ~ 3 nW.

Does anyone has other sources of information about this ?

Albert Rose studied this question in the 1940's and developed the Rose Criterion which states that the signal-to-noise ratio ($SNR$):

For $100$% identification of an object by the human eye is $SNR \approx 5$. He based this off of quantum arguments where he looked at the average number of photons per unit area in an photo image and stated gave the equation $\Delta N = kN^{\frac{1}{2}}$ where $\Delta N$ is the smallest perceptible change and $N$ is the average number of quanta absorbed in a pixel and $k$ is the $SNR$ (see eq 1, 1a and figure 1).

If one uses this ratio, then in two independent pixels one can distinguish one from the other if there are an average of $100$ quanta absorbed in the pixels, then one would be able to distinguish between the two, if one had $50$ quanta more than the other. This relationship has an obvious limit when the average number of quanta are $> 7$ and all the photon ($> 14$ total for two pixels) are found in one pixel and not the other, as shown in the table below. 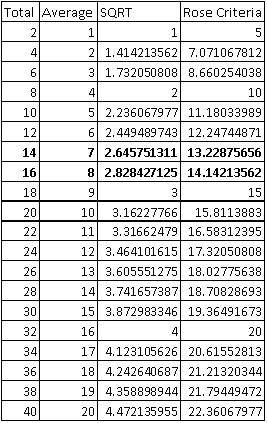 From a recent paper,

[...] Here we report that humans can detect a single-photon incident on the cornea with a probability significantly above chance. This was achieved by implementing a combination of a psychophysics procedure with a quantum light source that can generate single-photon states of light. We further discover that the probability of reporting a single photon is modulated by the presence of an earlier photon, suggesting a priming process that temporarily enhances the effective gain of the visual system on the timescale of seconds

it appears humans can just about detect single photons in the visible range.

Many years ago I have read about experiments of Vavilov and collaborators who claimed to have registered single photons by the human eye. I cannot, however, recall the source.

Not the answer you're looking for? Browse other questions tagged optics vision biology or ask your own question.

1
Is there 100% pure white?
1
If light carries its energy in discrete packets, why don't we see a series of flashes when we look at things?