It is well known how an image is produced in general: You need at least two rays (in geometric optics) to form it, see the image next: 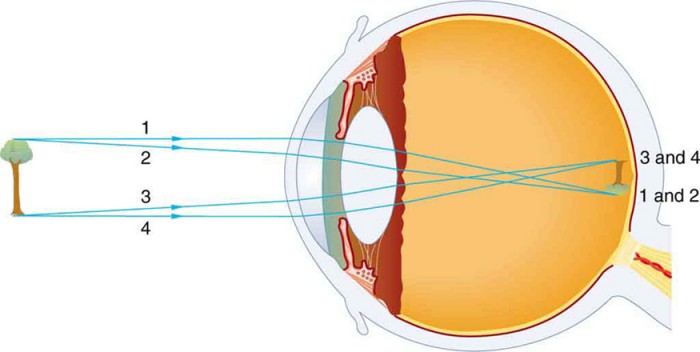 But I wonder about these images: 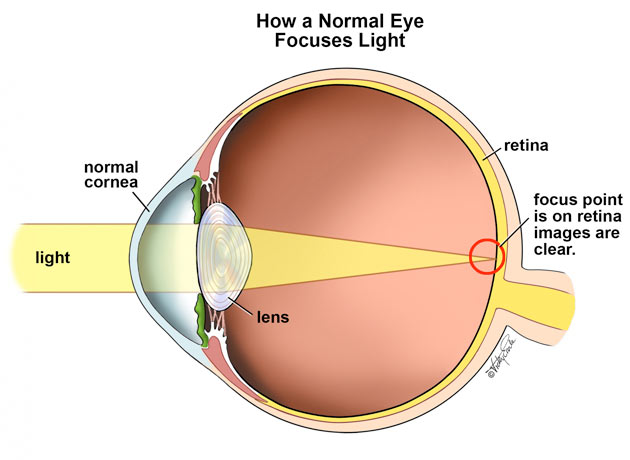 As you can see, in the upper picture, the generated image on the retina is achieved by, let's say, two rays that meet in a focus around the center of the eye. But in the lower picture, the image is generated while the focus is on the retina, so there are, in terms of geometric optics, no two rays to construct an image. It seems, that the lower version results in clearer images. From my understanding, there shouldn't be an image.

Using more sources provide a more insight view in regard to medical aspects:

So the mechanism in picture 1 seems to be an error of the eye. However, according to common geometric optics, there are two rays needed that do not meet in the focus:

So where am I'm wrong? I know it's quite basics but I can't get my head around it. Maybe it's more a question of medical matters as rays, focused on the retina, will deliver images behind it? Or is it physics I lack?

Diagram 1 shows how a normal eye focuses diverging rays from a near object onto the retina to form an inverted image. Just two rays (1 and 2) are shown from the top of the tree and two rays (3 and 4) from the bottom, but many more rays could have been shown - the normal eye will focus all rays that come from a common point on the object onto a single image point on the retina.

Diagram 2 shows how a normal relaxed eye focuses parallel rays from a point at infinity onto a single point on the retina. Again, just two rays are shown for illustration, but more rays could have been shown. Note how the rays in Diagram 2 are bent less than the rays in Diagram 1, and the lens of the eye has a different shape.

To focus on a near object, the ciliary muscles around the lens contract, which decreases the tension on the lens and allows it to become rounder, with a shorter focal length. This process is called accommodation. Accommodation allows the normal eye to focus rays from objects at a wide range of distances - from infinity down to less than 10 cm - into an image that falls on the retina. Note that the lens should actually be rounder in Diagram 1 and flatter in Diagram 2 - the shape of the lens in the diagrams is incorrect.

The third set of diagrams shows how the lens in the relaxed eye can have a focal length that is too short (short-sightedness or myopia) or too long (far-sightedness or hyperopia). Short-sighted people have clear vision for near objects and blurred vision for far objects; far-sighted people have the opposite. The third case, astigmatism, is when the lens does not bring rays from a common point to a single focus at all, resulting in blurred vision at any distance.

Not the answer you're looking for? Browse other questions tagged optics geometric-optics lenses vision biology or ask your own question.

0
Seeing the image as explained by Geometrical optics?
46
If a lens focuses all incoming light to a point, how do we get 2D images?
2
Why image is blurry or focused with convex lenses?
0
What is the optimal light setting for human vision? In other words, is my vision better during the day or at night?
0
When does the retina fail to recognize images of two closely separated points as distinct?
4
Why do we see a blurred image when the screen is not placed at the position where the image is formed by a convex lens?
1
Which are the rays that form the fringes in wedge shaped film and Newton's rings?
1
Convex lens -view real image with my eye at near point?