Is it possible to have an object 100% pure white without sky blue or sun color tinting the pure whiteness of the photons reflecting/deflecting off an object? Are there any lights that can produce pure white photons (RGB)? And can we see that the color is white or is our eyes going to trick us into thinking the white is a different color? Can scientist produce what can be seen macroscopically as "pure white".

To answer the question if there is a completely pure white light source, we need to first understand what white light even is and how we see it.

The images are taken from http://jamie-wong.com/post/color/, which is a great article about exactly this topic.

The human eye doesn't just see a particular wavelength of light and knows what color it is. It has a certain twist to it that makes it not very straight-forward to map a color to a wavelength.

When a light beam enters our eye it hits two different kinds of receptors: rods and cones. The rods only respond to the intensity of any visible light, i.e. the brightness, while the cones react only to light of a certain frequency region.

There are different kinds of cones, each of which is sensitive to a certain wavelength region: one sort reacts to blue, one to green and one to yellow/red light. Their response to a wave of a certain wavelength looks as follows (S, M and L correspond to short, medium and long cones): 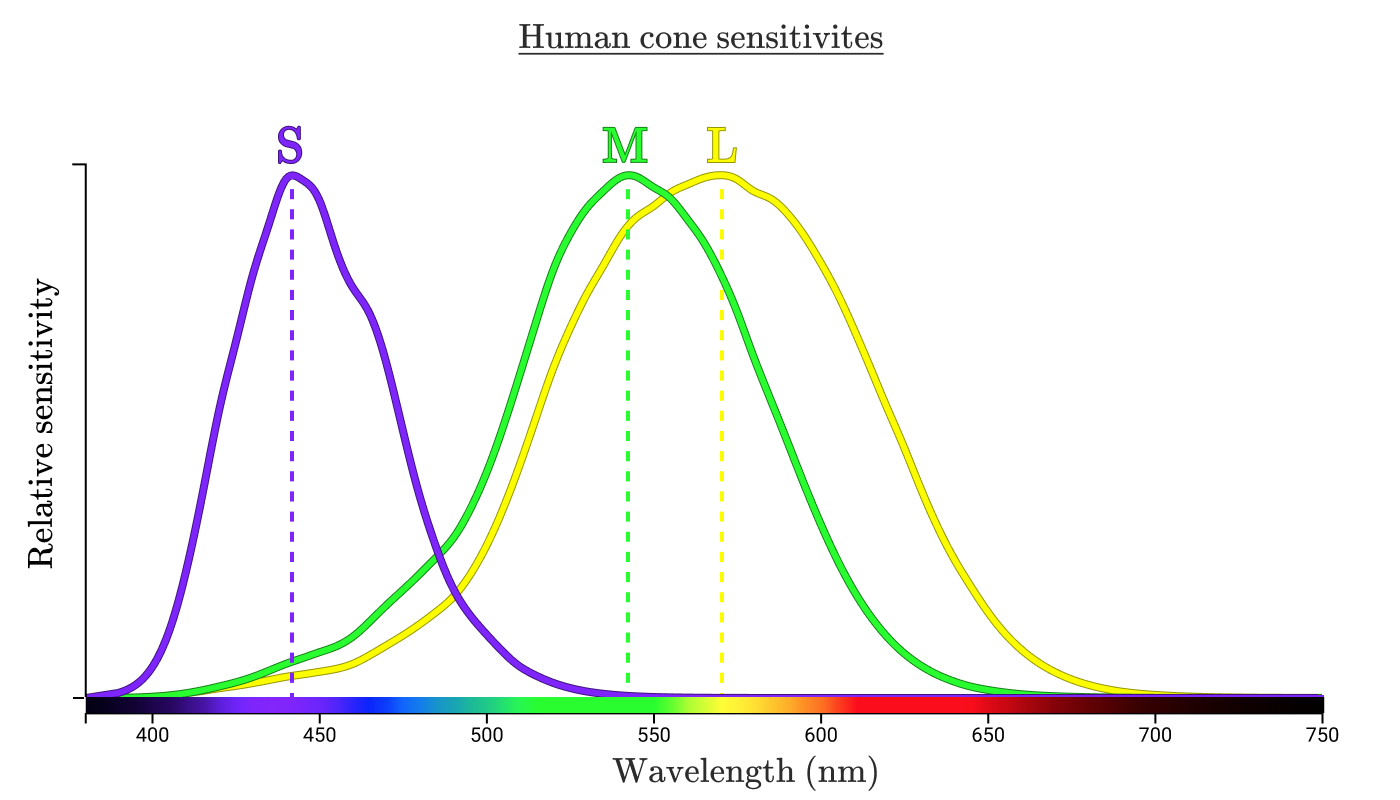 As you can see, the short cones are not only sensitive to entirely blue light (440nm), but also to some degree to green and violet light. Same goes for all other cones - their responses overlap.

What happens if purely yellow light enters our eye? It is detected by both the medium and long cones and sends an equally strong signal to our brain, which in turn interprets this as yellow. The short cones don't send any signal in this case. The graphs below show two different spectra, but both are recognized by our brain as the same kind of yellow: 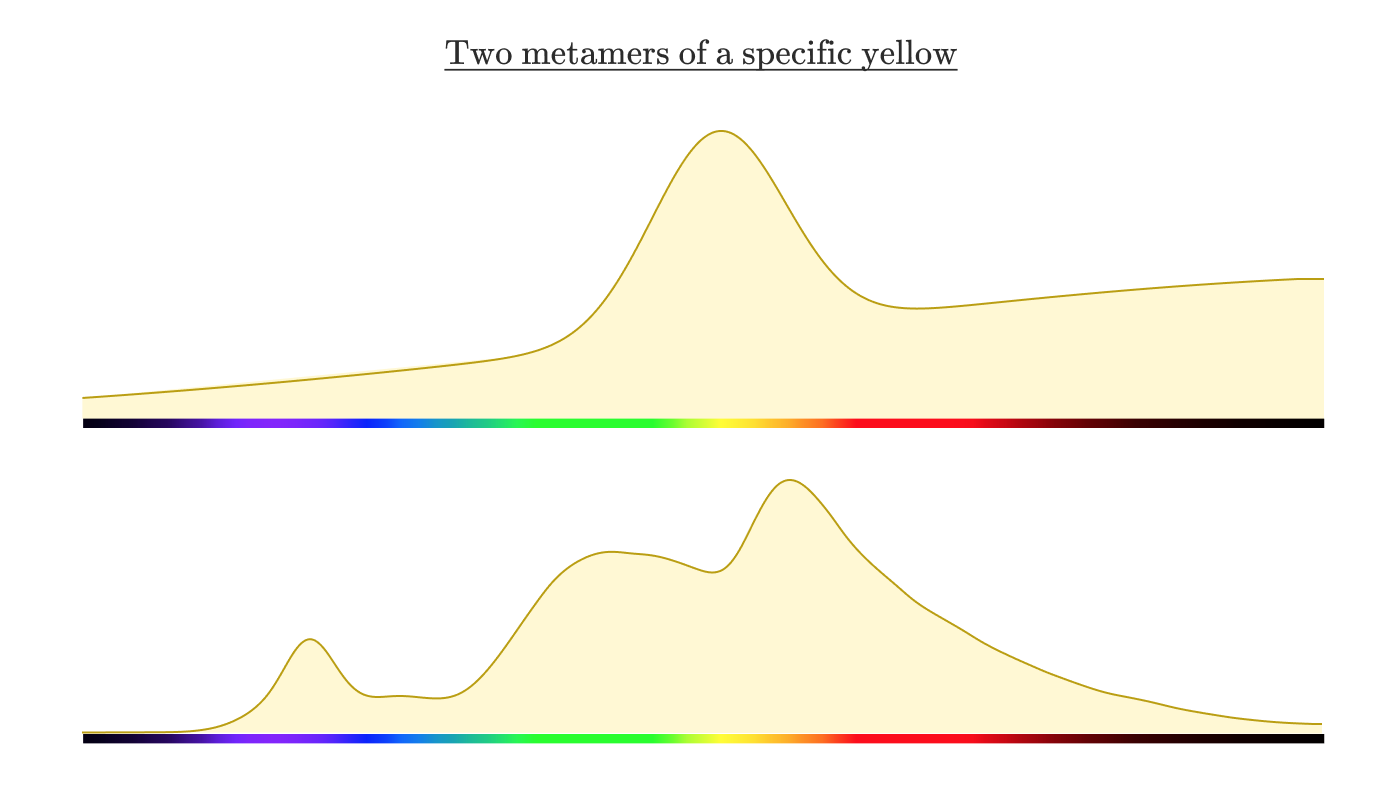 Our eyes cannot differentiate between the monochromatic light of e.g. a sodium lamp and a mixture of a red and green light. This principle is exploited in a monitor, where the intensities of the red, blue and green pixels are adjusted to "trick" the eye into thinking a certain color is shown. In reality, only different ratios of these distinct colors arrive at the cones.

What do we see as "white"? Our brain interprets a source as white if the cones in the eye send an equal response to the brain (more or less, at least). This could be for example a flat spectrum: the intensity of each wavelength is the same. In a perfect eye (in which the sensitivity for each cone is equal) this would be interpreted as white. This is similar to "white noise", a kind of noise that has a uniform frequency distribution.

A single photon has a tradeoff between how sharply its frequency and its length are defined. A short wave packet has a whole bunch of frequencies in it (it has a large bandwidth), while a wave "packet" with exactly one frequency is basically really spread out (like e.g. a laser).

There is no universal and objective way to define "pure white".

The reason for this is that colour perception has two important aspects:

Some components of colour vision can be uniquely determined from the physiology of the human eye, but other aspects depend on the context and on the conditions in which the colour is being perceived. This is the basis for most colour-based optical illusions.

To present just one canonical example, in the image below the squares marked A and B are precisely the same shade ─ and yet, our brains interpret A as being 'darker' than B because of the context they're in: 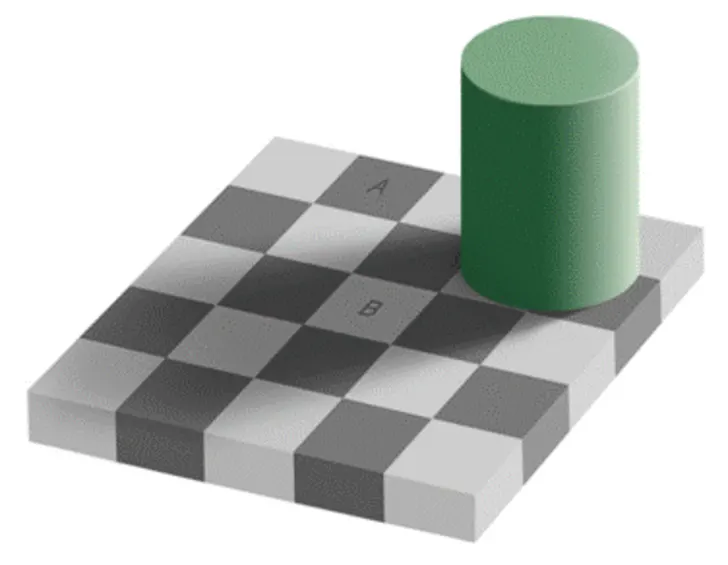 The terms "white" and "pure white" live within this side of colour vision, and as such, they are always context-dependent. To see how this works in detail, look up "white point" (i.e. the specific colour that's marked as "white" in a given image or illumination, and which is used to help encode and understand the rest of the colours present in it).

So, with that in mind:

Are there any lights that can produce pure white photons (RGB)?

I would think that a light source which has an emission spectre $f(\omega)$ that looks something like $$ f(\omega)=\begin{cases} \infty & \text{if infrared} < \omega < \text{ultraviolet}\\ 0 & \text{else} \end{cases} $$ could be considered pure white, but then, as others have pointed out, "pure white" has to be defined.

You observe white if your RGB cones produce the same, strong signal. If the signal is not strong it will be seen as grey or black.

A white photon should have a sufficiently wide intrinsic bandwidth. Perhaps a pulsed optical laser with a very short pulse length fits the bill. If the pulse length is of the order of a single wavelength the band width covers R, G and B.

"The lasing medium in some dye lasers and vibronic solid-state lasers produces optical gain over a wide bandwidth, making a laser possible which can thus generate pulses of light as short as a few femtoseconds." https://en.m.wikipedia.org/wiki/Pulsed_laser

Not the answer you're looking for? Browse other questions tagged optics visible-light wavelength vision or ask your own question.

4
Does a single white photon exist?
54
How many atoms does it take for us to perceive colour?
33
Why are stars white?
23
How much red, blue, and green does white light have?
5
What is the minimum optical power detectable by human eye?
3
What is the structure of white light in terms of photons?

7
Why does a glass window reflect white objects white from an atomic scatterers’ viewpoint?
8
How is temperature related to color?
3
Mechanism for visible light frequency mixing in storm clouds
6
White LEDs and colour perception
1
Are RGB LED's only capable of producing three colors of light? What about all the other colors?
0
Why is the sky near the Earth limb warm-colored, even far from the sun?