Why did the Bohr Model Successfully calculate some of the energy levels in hydrogen?

The Bohr model is incomplete and has drawbacks. But one thing is a mystery to me. Why did it so successfully calculate the Rydberg series with quite good number of correct digits?

Having such a good prediction one would expect that there exists an extension or modification to it, although we may not have found it, that would yield the correct model. But today we have abandon it completely and use QED. I would expect that from QED we should be able to derive the math in the Bohr model, my sub question is if there is such a derivation and it would also be super duper if we could sketch it here.

To reproduce the energy levels is not enough, that's too simple. What bugs my is that Bohr derives the energy from very few assumptions and sets up the solution through a natural force balance. Why is it that a faulty model can deduce the energy levels? My expectation is that the success to use this force balance should be possible to be answered from Shrödinger or Dirac and it is this link I want to know more about.

What bugs my is that Bohr derives the energy from very few assumptions and sets up the solution through a natural force balance. Why is it that a faulty model can deduce the energy levels?

Bohr's model looks weird in the context of proper quantum mechanics, but it's a lot more solid than we usually give it credit for. A lot of features of it must work, because they rely only on the correspondence principle, the idea that classical and quantum mechanics should agree in regimes where both are valid.

At high energy levels, $n \gg 1$, we should be able to recover classical physics, which predicts that electrons emit radiation of frequency $\omega$ as they circle a proton with angular frequency $\omega$. But quantum mechanics predicts that we get radiation of frequency $(E_n- E_{n-1})/\hbar$, as had been motivated by Planck in his quantum treatment of radiation several years earlier. These two must be equal. I emphasize this isn't some unjustified random assumption; it must be true if quantum and classical mechanics are to agree in regimes where both apply.

Doing a little algebra, one can show the radii of the orbits go as $$R_n \propto n^2$$ for high $n$. Here, Bohr's dimensionful prefactor is correct because of dimensional analysis; it turns out that Planck's constant is the only fundamentally new dimensionful quantity you need. Meanwhile, the basic dependence on $n$ is perfectly correct, and as discussed it follows from the correspondence principle. Similarly, speaking of circular orbits for high $n$ is perfectly valid, because one can construct localized wavepackets from quantum states that do perform sharply defined circular orbits. Again, if you couldn't, then quantum mechanics wouldn't limit to classical mechanics, and we know it has to.

Bohr's result happens to be equivalent to $L_n = n \hbar$, but this wasn't what he actually used. Just saying $L_n = n \hbar$ without any other context would be an unjustified, totally random assumption. Textbooks introduce it this way only because it's shorter, but it isn't historically accurate.

From the orbit radii, it follows that the energies are $$E_n \propto -\frac{1}{n^2}$$ where again the prefactor is correct by dimensional analysis. Again, this is not a coincidence; it is the generic behavior you would get applying the semiclassical limit to any potential with a $1/r$ tail, so it also works for Rydberg states in more complicated atoms.

The miracle of Bohr's model is two-fold. First, it works even for non-circular orbits, which correspond in the full quantum theory to wavepackets built from states with $\ell \lesssim n$. This is special to hydrogen; the general semiclassical result would be $$E_n \propto - \frac{1}{(n - \delta_\ell)^2}$$ where $\delta_\ell$ is called the quantum defect. Today, we know that the degeneracy of levels with different $\ell$ in the hydrogen atom is due to a hidden $SO(4)$ symmetry in pure $1/r$ potentials, which is the same one that guarantees the conservation of the Laplace-Runge-Lenz vector in orbital mechanics.

The second miracle is that the result continues to work well even when $n$ isn't large. This has no justification like the semiclassical ones I gave above, and I suppose it's just because simple equations have simple solutions. In other words, nature was kind to Bohr. New theories often get off the ground with lucky breaks like this one.

Bohr's model actually is part of the "old quantum theory" prior to the advent of wave and matrix mechanics that is based on the concept of classical mechanics that the motion of particles (electrons) can be described in phase space with general coordinates $(q_i,p_i)$. Under this assumption orbits, in particular periodical orbits exist. The essential additional ingredience to this model was that the action $J$ of such orbits

is quantisized, i. e. that

And indeed under this assumption Bohr and Sommerfeld could achieve a couple of amazing agreements between computed and measured spectra lines. In this context I recommend to read the chapter 10 of Goldstein(Classical mechanics) on "Hamilton-Jacobi Theory and Action-Angle variables" which shows impressively on which ideas Bohr's model is grounded. But Bohr's model has a couple of shortcomings, for instance the chemical bonding could not be very well explained, an important question for chemists. Neither Bohr's model can explain all the conclusions which derive from Pauli's exclusion principle (which is a kind of result of QED respectively QFT). And finally, it is not compatible with Heisenberg's uncertainty principle according to which position and momentum of particle cannot be measured simultaneously. Therefore the concept of electrons circulating on fixed orbits had to be abandoned.
As you might certainly know a theory is only valuable as long as it cannot be replaced by a better one which provides more insights and comprises a larger number of correct description of phenomena.
Wave mechanics provides a rather different picture of the shell of an atom which no longer uses the concept of quantisized action $J$. Therefore the formalism of Bohr's model cannot be "derived" from QED or QM. Instead Bohr's model is based on classical mechanics (see above). The wave mechanics, however, regards the spectra lines as manifestations of stationary energy states in a bound system which are found by the solution of Schrodinger's equation. Each textbook on quantum mechanics demonstrates this.

Bohr's guess was that orbital angular momentum is quantized in multiples of the quantum of action, and that is correct.

Bohr assumed circular orbits and that is wrong. But one feature of the hydrogen atom is that the $1/r^2$ interaction leaves all states with the same principal quantum number degenerate: "circular" orbitals where $\ell = n-1$ have the same energy as $ns$ wave functions. (As in classical physics, where only the semimajor axis of the orbit determines the energy.)

Bohr said that an electron would revolve in certain stationary orbits and he gave its mathematical interpretation.

While in quantum mechanics we deal with probability of finding an electron around the nucleus so we can't derive the Bohr's postulates as Bohr said that "electrons revolve" in circular orbits while QED says "electrons may be found" in region around nucleus but Bohr's theory is quite close to what predicted by QED.

”… Having such a good prediction one would expect that there exists an extension or modification to it.”

Bohr’s principle is mathematically written as $$L=mvr=n \frac{h}{2π} → mv= h \frac{n}{2πr} \tag{1}$$ Let’s now suppose that the electron in atoms move in a (a) circular (b) classical motion and that associated to it there is a wave. Considering that these orbits are stable and that the electron do not radiate as it was supposed to do, one could hypothesize that the wave is (c) a standing wave since we know that standing waves are stable and do not radiate from classical physics. 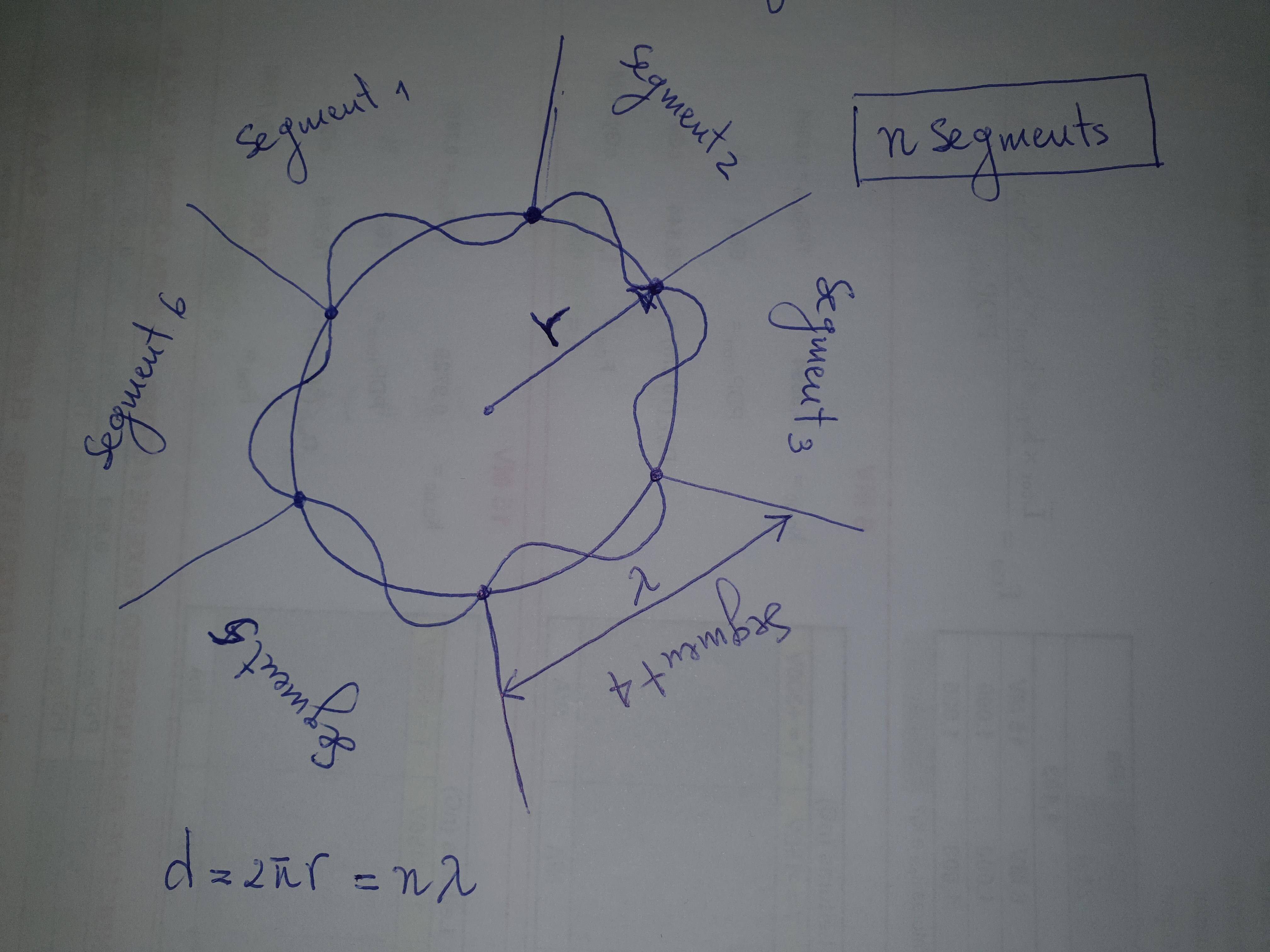 I want to highlight Fredric Thomas comment above about the correspondence principle.

We can write a solution to the Schrödinger equation like, $$ \Psi = (A(t,x) + \hbar B(t,x) + ...)\exp(i S(t,x)/\hbar). $$ Now if we apply schrödingers equation collecting the terms with the same $h$ we end up with a sequence of equations where the first one is

Anyway we can remove $A$ in the equation and conclude that $S$ solves the Hamilton Jacobi equation for which the Bohr model is a solution, e.g. $$ -\frac{\partial S}{\partial t} = H(x,\nabla S). $$

Note that invariants of the motion can be calculated approximately because the norming of $A$.

If you lookup the solution to Hamilton Jaccobi equation for two body mechanics with spherical potentials in spherical coordinates, which is the same system as this action $S$ but with different constants you will find that the action is of the form, $$ S = S_r(r) + S_\theta(L,\theta) + L_z\phi - E t $$ The astute reader will notice that this is different that the traditional solutions to the Schrödinger equation. So something is wrong. First forget about this, there are more weird things with this solution. Namely it is defined in a plane because $L_z$ is a constant. So what we have is a kind of sub solution that covers just a part of $R^3$. We could say that maybe we can divide the solutions to the Schrödinger equation in more sub solutions with Schrödinger equation restricted to a plane is solved. Donough but for the sake of the argument let's assume that such solutions are possible to define mathematically and are bounded and regular enough. The first observation is that all such solutions are orthogonal because the intersection of different planes consists of a line which has measure zero in math lingo or the integral is zero along that intersection. This property means that we can weigh all such solutions (the same energy but different $L,L_z$) together. But look at one such specific solution where $L=L_z$, then we have the factor $\exp(iS_{\phi}/h) = \exp(iL_z\phi/h)= \exp(iL\phi/h)$. If we make one turn e.g. $\phi = 2\pi$ then we would expect the solution to return to the same value due to it some mathematical sense like it feels natural and but also that we have plenty of arguments in other answers that such is the case, and hence we assume $L 2\pi/hbar = 2\pi n$ and, $$ L = \hbar n \qquad n=1,2,3,4,... $$ In this sense Schrödinger imply that the Bohr model is satisfied and always in QM there is a corresponding Bohr like model. Also for many body problems, but here I assume the math becomes intractable for the classical system so it is never used.

There is one observation more that we can make. $L$ is a constant of the motion and therefore a uniform weight of them will result in all them added together with a uniform weight and they result in zero total angular momentum e.g. the same as the angular momentum for the ground state. $\exp(-Et)$ is the same for all of them so that factor remains.

Not the answer you're looking for? Browse other questions tagged quantum-mechanics atomic-physics history semiclassical or ask your own question.

8
Why doesn't the Schrödinger equation contain a term of $mc^2$?
2
Why does the Bohr model give the correct energy levels for hydrogen even though it assumes a circular orbit?