Q.1) What is the idea of stationary orbital of electron? As it is said energy tangled with mass and vice versa how is this energy always be in the form of cloud such as s, p, d, f? From where does this energy come from?Why don't the energy cloud vanish away or what is stopping it to not vanish away?

First of all let us make clear the the Bohr model posits orbits, with some imposed by hand quantization constraints, as the stationary assumption.

Orbitals for the hydrogen atom are the solutions of the Schrodinger equation with the hydrogen potential energy and helped develop quantum mechanical theory.

In QM the solution of the schrodinger equation is a wave function and the square of this wave function gives the probability of finding the electron at a specific (x,y,z). Orbitals are probability distributions with specific quantum numbers. The theory and the experiment agree .

A hydrogen atom in its ground state (n=1,s) will stay there forever unless the atom is hit with a photon with an energy difference between the s state and another orbital position. Thus the energy for higher states is supplied by a photon interaction. These higher states will decay to the ground state releasing the energy as a photon.

Taking your questions in this order:

As it is said energy tangled with mass and vice versa.

Energy tangled with mass is the equation E = mc$^2$, meaning, as I am sure you know, energy and mass can convert into each other using this equation. For your particular question though, I would ask you to (temporarily) forget this idea as, although you are correct, it really has nothing to do with the rest of your question and it is only confusing things.

What is the idea of stationary orbital of electron? From where does this energy come from?

In nature, if an object has a chance to lose energy, it will lose that energy, like you holding a rock above the ground and then dropping it. The potential energy of the rock will vanish when it lies on the ground and you will need to use your own energy to pick it back up.

In something like the same way, if an electron and a proton get close enough, because they have opposite electric charges, they will be attracted to each other and form an atom, in this case the Hydrogen atom.

As the electron is pulled into towards the proton, it will emit radiation (and lose energy doing that ) until it goes into the lowest orbit around the proton, (which is called the 1 S orbital), in which it will have the lowest energy level. Unless it receives energy from say, a light photon, it will stay in that orbit forever, that is your reference to "stationary", as it does not have enough energy to go anywhere.

The electron will not go straight "into" the proton, otherwise we would not have atoms, instead it will most likely be found somewhere around the proton, in an orbital region. We can't say "exactly" where it will be found, we can only say where there is a very high chance it will be found.

how is this energy always be in the form of cloud such as s, p, d, f.

The electrons that gather around the nucleus of an atom have to follow a set of rules, which we just accept as we don't fully understand them. One of these rules says that only two electrons can be at the lowest energy level and that any other electrons must go into higher energy levels, as the one below them is full.

As the next electrons come along, they have more energy and they arrange themselves in the p, d, f orbitals according to the rule I said above, that only two electrons can fit into each orbital. But the crucial part to remember here is that the 2nd highest energy level allows the electrons to have more energy than the lowest energy level, so the electrons take up different orbital patterns, not just spherical like the 1 S orbital, but other odd shapes such as the p, d and f orbitals, that allow them to do three things at once:

As anna says, don't think of the energy being in a cloud, it's not anything directly to do with energy, instead think of the cloud as the region where the electron is most likely to be found. 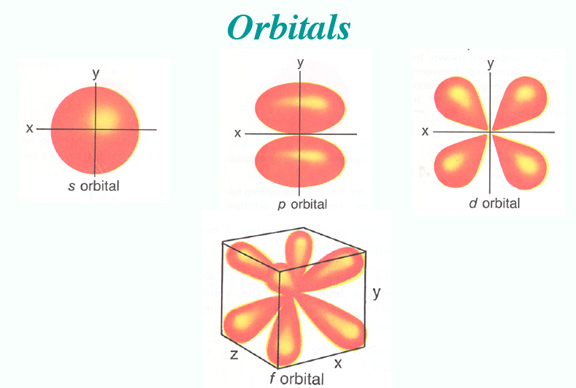 That is the most straightforward answer I can give you. In this answer, I need to ignore or simplify a lot of points, so my apologies for doing that.

anna has given you a much better answer than mine, although you might need to read more about this subject first to follow it.

15
Trouble understanding the Bohr model of the atom
-2
Could it be that all energy is seeking ground?