Dexcitation/Excitation of $e^-$ in Bohr Model

My teacher told me that (in his words):

When an $e^-$ is excited in Bohr Model to $n^{th}$ energy level, then $e^-$ stays in this energy level fora very short time of the order of $10^{-8}$ seconds or less.After this time, if any $e^-$ic state is vacant in lower energy level(more stable states) then electron from excited state can transit to any of the lower states till it reaches the most stable state $(n=1)$.

Another thing which he told me which sound fishy to me (in my words):

The $1s,2s$ and $2p$ are depicted below which show the boundary surface of these orbitals where electron can only be found as per its configuration($e^-$ of $1s$ will be found in the inner circle).Firstly I know that orbitals are only $90\%$ or so probability region so first we can't assume a fix boundary(watch out, this creates a problem later), maybe he told that to explain us better. 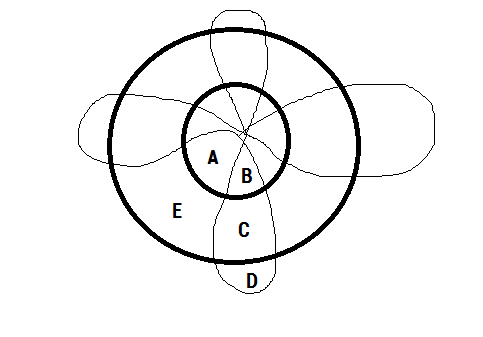 He told that when $e^-$ is in position $B$(originally in $1s$), it can go to $2s$ by just gaining energy and staying at its original position, because $2s$ encompasses the $1s$ region too. But when it is in position $E$ or $C$ it needs to come back into $1s$ which takes atmax a time of the order of $10^{-8}$(I argue that $1s\wedge2s$ extends to $\infty$).Also he told that when $e^-$ is in position $A$ it can't go directly into $p$ orbital because it first needs to come into the overlapping region $B$(again, same argument)

Later when I argued and said that $1s$ extends to $\infty$, he accepted but said that the probability outside this region becomes negligible, something he drew like this: 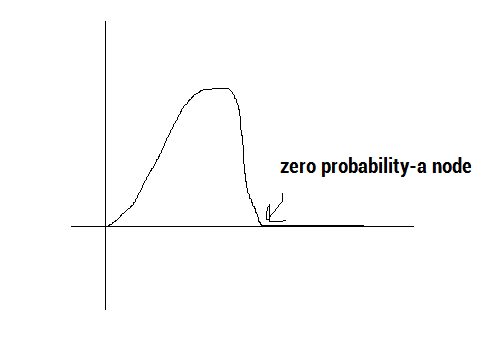 Then he said this is the quantum world and we cannot use our intuition and dismissed the topic.

Question: How can an electron change orbitals staying at same positions, if it can then it must be able to do it all the time, why not only at the time of deexcitation?

Another fishy thing he said was(It might be correct):

We know that an orbital(or orbit it was) cannot accommodate more than two $e^-$, it is not because of the $e^-$ic repulsion, and if we make mathematical calculation, we'll get more attraction from nucleus to the third incoming $e^-$ as compared to the repulsion due to the two other previously present electrons.He said that it is based on something high and beyond our course and he can't tell us the whole thing, but this is because of the calculation results indicating a higher unstable energy of system.

Question: The thing here is I know pauli's principle from my chemistry, but I'm not convinced of the reasons he gives which I highlighted.

Edit He meant to explain the fact(first point) with the use of schrodinger wave equation.

I will stress what the other answers also include. The Bohr model does not have orbitals, but orbits, similar to the planet orbits around the sun. It is the first successful effort to describe the experimental behavior, i.e. the photon spectra, that excited atoms emitted. It postulated steady orbits. A postulate is like an axiom in a theoretical model that fits experimental data.

When we are talking of probabilities, we are in the realm of quantum mechanics. Quantum mechanics is a theory that fits all the data we now have accumulated of how the microcosm of atoms molecules particles works. It started with the Schrodinger equation, whose solutions for the atom gave the Lyman series and went beyond orbits, into orbitals.

The shapes of the first five atomic orbitals: 1s, 2s, 2px, 2py, and 2pz. The colors show the wave function phase. These are graphs of ψ(x, y, z) functions which depend on the coordinates of one electron. To see the elongated shape of ψ(x, y, z)2 functions that show probability density more directly, see the graphs of d-orbitals below.

An orbital is a probability distribution of finding a particle in a point in space ( x,y,z) at time t. Probabilities come in because a prime postulate for the Schrodinger equation is "the square of the solutions describes the probability of finding the particle under consideration" . It is an axiom that connects the solutions of the differential equation to physical measurements. That is why quantum mechanics evolved. The classical orbits are no longer valid in the microcosm. If you observe the plot, you will see that the probabilities overlap in space. That is how an electron can change orbitals while at the same position in (x,y,z,t) if energy is supplied to the system in the appropriate form, i.e. a photon, because we are talking of electromagnetic interactions.

How can an electron change orbitals staying at same positions, if it can then it must be able to do it all the time, why not only at the time of deexcitation?

Energy conservation assures that a de-exciting atom emits a photon, and that a photon is needed to go to a higher energy level. De-excitations happens due to the overlap of the probability distribution around the atom. If an empty level exists a probability for decaying with a photon into it can be given by the solution of the equation. To get experimentally the probability distribution one has to do a lot of measurements on a lot of atoms set up at the same energy level. This has been recently only done for orbitals of the hydrogen atom.

The microcosm had another surprise for the first researchers who tried to find how molecules behave . They discovered that the quantum number of spin divided all molecules/atoms/particles into two categories : integer spin and half integer spin. More importantly, that ensembles of these particles behaved statistically differently if they had integer spin, bosons, or half integer spin, fermions. At the level of atomic orbitals the Pauli exclusion principle assures that no two electrons can occupy the same energy level and have the same spin. Only pairs of opposite spin can do that. This is an observational fact and the Pauli exclusion is part of the "axioms" necessary to explain the microworld with quantum mechanical solutions of the appropriate equations.

In general one should keep in mind that the weirdness of quantum mechanical behaviors is not a complex imagination of theorists. It is how one can describe experimental numbers and predict new behaviors in the realm of particles. It needs time to develop an intuition.

The concept of probabilty distribution is an interpretation of the Schrodinger equation wavefunction solutions.

Transitions between 1s and 2s are forbidden by the Laporte Rule.

That an orbital can not accomodate more than two electrons is the Pauli Exclusion Princple.

You ask "How can an electron change orbitals staying at same positions, if it can then it must be able to do it all the time, why not only at the time of deexcitation?"

Why do you think the electron needs to change position to jump from one orbital to another?

Orbitals are energy states of an electron not "position" states. An electron simply needs to change its energy to move from one orbital to another.

We can consider an (oversimplified :P) example of an electronic excitation:

An electron in 1s orbital has some position and some momentum. According to this position and momentum, it moves around the nucleus such that its probability distribution takes the form of the 1s orbital.

Then a photon strikes this electron and changes its momentum (only momentum, not position) and correspondingly its energy. Now with this new momentum, the electron will move such that its probability distribution now takes the form of another orbital (2s , 2p, etc.)

Thus, this electron has been excited from one state to another, simply by changing its energy, not its position. You can form a similar equivalent for deexcitation.

Note: Quantum collision are much much more complicated than this :P, this was just to explain to you.

In the classical Bohr Model, an energy change is always accompanied by an immediate position change. Maybe that's why you are getting confused. It is not necessary to change the position to change the energy

Not the answer you're looking for? Browse other questions tagged atomic-physics or ask your own question.

2
Explanation on Atomic Orbitals and Molecular Orbitals
1
What does excitation in an atom mean?
4
Can an electron in an atom have insufficient energy to achieve an energy level, or orbital, and what happens to this electron when this occurs?
1
Excitation of paired electrons in electron orbitals
2
Why does noble gas electron configuration have low energy?
0
Determining excitated state of an electron of an $\rm H$ atom
8
How do orbitals exist in an atom?