Energy levels of hydrogen as $n$ goes to infinity

and that there are technically an infinite set of these energy levels. As you get closer to $n=\infty$ the energy appears to decrease more and more rapidly, as it gets closer and closer to 0, at which point the the electron would no longer bound in quantized orbits of angular momentum. The angular momentum is given in the Bohr model as

and if you set this equal to an other quantity like $mrv$ or $r\times p$ you could get a radius for the orbit $r$. It is taught that this radius grows and technically also goes to infinity, is this always true? Is there any modifications that make the orbits converge at a certain distance as in something like a Poincare disk (see image)? 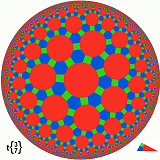 The Bohr model is far from exact, and the electrons don't strictly have 'radius of orbit' as they have a distribution function across space, but basically your intuition is not worng: as $n\to \infty$, the available angular momentum levels also grow, since $L<n$ (so for $n=15$, for example, the quantum angular momentum number can grow up to $14$). As $L$ grows, the probability to find the electron far from the center of the atom also grows, but quite slowly.

So yes, for an 'isolated' hydrogen atom, an electron at energy very close to zero from below will be spread throughout large volumes of the space surrounding the atom. This is not so surprising, maybe. If we employ again classical intuition, and think of the electron as an object that orbits the nucleus in a similar manner that planets orbit the sun, then even far away from the center the planets are bound by the potential.

In reality, though, this doesn't really happen. Electrons tend to try to stick to the lower levels, and will emit photons in order to decay and sit at the safety of the lowest levels. If we will try to excite the electron, it will more likely become completely unbound escape the atom altogether, ionizing it and leaving us with a free electron and a proton. The state at which the electron is at an eigenstate with very large $n$ is not realistic.

In the Bohr model, the radius of the $n^\text{th}$ orbit is

Using hydrogenic wavefunctions from the Schrodinger equation, the expectation value of the radius in the orbital with quantum numbers $n,l,m$ is

I didn’t look up what it would be using wavefunctions from the Dirac equation, but it would differ only very slightly from the Schrodinger calculation.

Physicists study “Rydberg atoms” in highly excited states. They have never found any evidence that the radii converge at large $n$. There is no Poincaré disk model of hydrogen because hydrogen doesn’t behave anything like you suggest. The orbital radii get farther and farther apart with increasing $n$, not closer and closer together.

Yes, you are right. It is the same reason that a spacecraft orbiting a planet under the influence of gravity will eventually escape to infinity at a finite maximum energy. The electric force from the nucleus, just like gravitation, decays with the inverse square of the distance (so twice the distance means 1/4 the force pulling), and hence it "loses its grip" fast enough so as to not require an infinite amount of work to be done in propelling the bound object (here an electron, in astrodynamics, a spacecraft) away.

And yes, the "fuzzy position" of the electron grows to infinite scope, just as does a classical orbit, as $n$ approaches infinity and the energy $E$ approaches the escape energy $E_\mathrm{esc}$, which is taken conventionally as zero(*) in both the quantum and astrodynamical cases. It's just that in quantum mechanics, that energy approaches in discrete steps, instead of as a continuous real number, in a way somewhat reminiscent of Zeno's paradox.

(*) This is because the total energy equals the kinetic energy plus the potential energy ($E_\mathrm{tot} = KE + PE$), and the potential energy has an arbitrary constant shift to it because it must be measured with respect to a reference configuration. So this can be set at anything, and hence we can arrange for the energy "zero" to be at some convenient point.

4
Bohr Model of the Hydrogen Atom - Energy Levels of the Hydrogen Atom
3
Are "gravitational atoms" stable without quantization?
3
Questions on Stark Effect on Hydrogen
3
Why does $2p$ have highest RDF at $4a_{0}$?
5
What actually makes a Bohr's radius stable?