Does a friction force act on a body on a flat surface with no external force?

I know that if an object is on an incline, there is friction as a reaction to the component of the object's mass that is parallel to the surface.

I know that if an object is on a flat surface and an external, horizontal force is applied, there is a friction force as a reaction.

Friction is a self-adjusting force that opposes relative contact motion between two surfaces. If a surface is not perfectly smooth, friction will always be there. If a block is on a flat surface, friction adjusts itself to zero as there is no tendency for the block to rub against the flat surface. If you were to apply even the slightest force in the horizontal direction, the frictional force would try to counteract that.

Consider a body on a surface. What we call the friction between the body and the surface is actually the averaged effect of interactions between countless atoms where the body and surface meet. When the body is stationary on the surface, all of those individual interactions between atoms cancel each other out- they are in equilibrium, and the net force is zero. So, overall there is no net frictional force acting on the body- if that wasn't the case, friction would cause the body to move.

When a small external force is applied to the body it will shift fractionally and all the millions of tiny forces will change somewhat, some increasing and some relaxing until equilibrium is reached again. If the force is gradually increased the body will continue to move fractionally until the point at which equilibrium can no longer be maintained- beyond that point further increases in the external force will accelerate the body across the surface.

So, there is no static friction force if :

As a side-note,- if static friction force would exist without external force applied,- then body which have been put on flat surface, would have started to move itself with acceleration (second Newton law), without any apparent reason. Thus it would break causality.

However, surface features which causes friction force,- called asperities-, exists always no matter friction force is induced or not. Asperities: 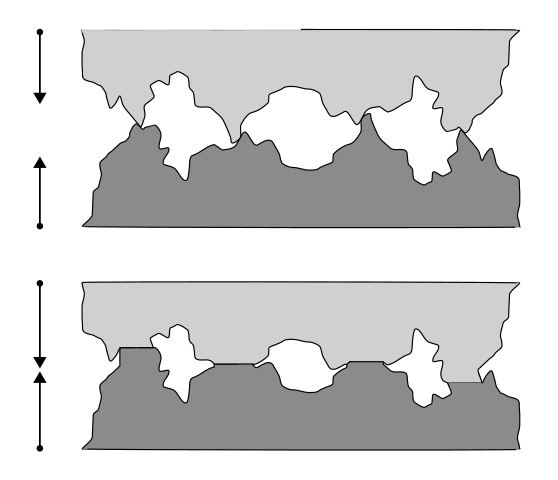 As a bonus points. Typical earthquake is caused by the same friction mechanism when static friction force is not able to hold-on pair of drifting tectonic plates glued together anymore.

0
How should I draw this free-body diagram?
5
Is the Normal force dependent on the density of the object the body is resting on?
1
How does static friction increase with increase in the applied force?
1
Question about a car on a banked turn with no friction
1
Friction on a body
0
Which normal force for friction?
0
Free body diagram for the static friction of an object with a horizontal force applied?
1
Static friction free body diagram on a flat plane
2
Why does Friction act Parallel to the Surface (Microscopic Level)?
1
If I hold a ladder at an incline to a frictionless surface and then release it, will it slide?