How does static friction increase with increase in the applied force?

My book says that 'Between surface of contact between two bodies there are contact forces applied between each other (they are equal in magnitude but opposite in direction,obeying Newton's 3rd law) due to electromagnetic interaction. The perpendicular component of the contact force is the Normal force while the parallel component is the frictional force. Friction is caused due to the coldwelding ie. formation of bond between the micro contact areas. When they distort due to external force,they create vibration waves which become damped releasing heat.' But it didn't tell about the mechanism of static friction, how it happens in the microscopic level. As the external force on the body increases, static frictional force also increases its value (upto a level). How does the force of static friction increase ? What is the cause of it at the microscopic level? Does the bond become more strong? How does this increase in static friction happen?

I am not an expert in such fields, but I'll give you an overview of how I've learnt it.

The main point to realize is that, on a microscopic scale, the surfaces we initially thought of as "smooth" contain actually a great many irregular protuberances.

Coming back to the surface area between the two objects, one must carefully distinguish between the microscopic area of contact and the macroscopic upon which the friction force is independent, meaning they can be lying on top of each other with their larger cross sections or their smaller parts, it will not matter. Of course this seems surprising at first because friction results from adhesion, so one might expect the friction force to be greater when objects slide on their larger sides, because the contact area is larger. However, what determines the amount of adhesion is not the macroscopic contact area, but the microscopic contact area, and the latter is pretty much independent of whether the objects lie on a large face or on a small face.

Key idea is that the normal force puts pressure on the protuberances of one surface against those of the other which causes the protuberances/junctions to undergo a certain flattening (elastic deformation e.g.), and this increases the effective area of contact between the "rough" parts (before, you can imagine that only the tip points where actually bonding), as illustrated in these two pictures: 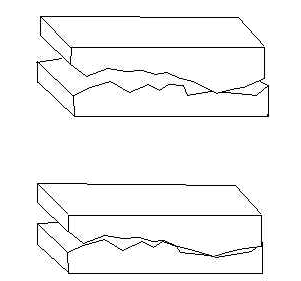 Second picture: larger effective area of contact or in other words higher number of contact points between the protuberances, also as pointed out by Jim.

To conclude, we now can tell that for large macroscopic contact areas, the number of protuberances in contact is larger but since the normal force is distributed over all of them, their deformations are less important (smaller effective microscopic area), whereas the opposite will hold for smaller macroscopic surfaces, where the deformations are very strong and maximize the contact between the junctions, but their numbers is comparatively lower. All of which explains why macroscopic areas don't matter.

As for larger normal forces, it will increase the deformation of junctions and make the coupling between the surfaces stronger. 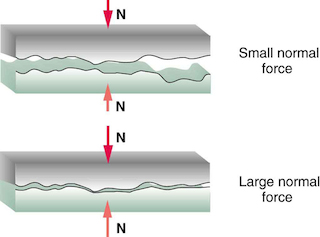 1
What is the physical nature of a "force"?