How deep is the Great Red Spot?

The Great Red Spot (GRS) is a very persistent storm system that's easily visible through a telescope on the surface of Jupiter. But what is the three-dimensional structure of the GRS, and how deep into the planet does it extend?

When I first wrote this question I assumed that the GRS must be the end of a linear vortex, which leads to the question of why we can't see the other end elsewhere on the surface, as I discuss next. However, as hwlau pointed out in an answer, this isn't the only possibility, so I've added a section discussing another, more probable, case below.

If the Great Red Spot is the end of a vortex

According to my possibly-flawed understanding of fluid mechanics, you can't have a vortex with only one end, at least in invsicid flow. On the surface of Jupiter, the flow has an enormous Reynolds number on the scale of the GRS, so it's very nearly inviscid. If this is also true in the planet's interior then the other end of GRS vortex should terminate against a surface - but there is no solid surface on Jupiter (at least not anywhere near the upper part of the atmosphere that we can observe), so what plays that role in this situation? Is it just that the viscosity of Jupiter's atmosphere rapidly increases with depth, allowing the Red Spot to be only a shallow surface feature, or does it actually extend deep into the planet's interior?

Wikipedia has some information about deep models of Jupiter's interior. It doesn't mention vortices in this context but it does say these models predict that Jupiter's flow is organised into concentric cylinders parallel to the axis of rotation. A friend pointed out to me that this means the Red Spot vortex should extend into the interior parallel to the rotation axis as well, like this: 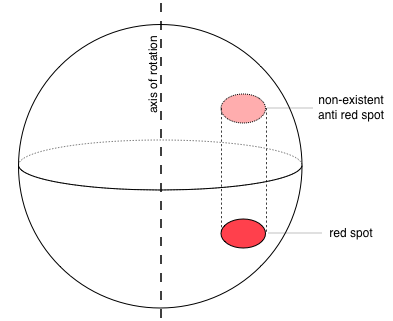 As shown in the figure, if the flow were completely inviscid (and this idea is correct), we should expect to see the other end of the vortex as a second storm, rotating in the opposite direction in the north equatorial belt. This doesn't match the observations, so presumably the vortex terminates before this point - but I'd like to know how far into the planet it extends before doing so.

If the Great Red Spot is a closed vortex

hwlau pointed out that the GRS needn't be the end of linear vortex at all, but could instead be a closed vortex oriented parallel to the surface, like a flattened smoke ring, as I've attempted to draw below: 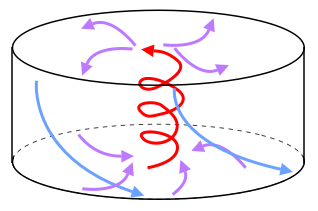 This probably makes a lot more sense than my linear vortex assumption, because the GRS is presumably driven by thermal convection, and this geometry makes sense for a rotating convection cell. (Large storms on Earth have a similar structure.) Intuitively, if the structure of the GRS is like this, it seems like it should be less deep than it is wide - but since the GRS is wider than the Earth, that could still be quite a substantial distance, and I'm interested in whether a number can be put to it.

The atmosphere is not a simple two dimension spherical surface. You should also consider the convection up or down the atmosphere.

As the red spot is more like a spiral than a vortex, now lets imagine, instead of moving up directly, the streamline spiral around the central axis for a little bit less than one turn, so it need to spiral on the top surface in order to complete the remaining turn to make the streamline closed. Now when you view it from top, you should be able to see the spiral like the red spit from the top.

So why there is no vortex created? I think the key point is that the streamline are perfectly moving down along its outside circumference boundary. This feature is also true for other cylindrical shape (or a part of conic). Hence, it is possible to combine them somehow together to form a spherical shell like the atmosphere. Along this imaginary boundary, all streamlines are pointing down and no streamline are pointing parallel to the surface, so there is no new vortex created.

I dont have a good understand about vortex/antivortex, but I think the vortex are created due to the opposite streamline near a point. It also sound strange to me as I never see a pair of tornado in the north and south hemisphere on Earth.

I may have found at least a partial answer to my own question in this review paper:

Vasavada, A.R.; Showman, A. (2005). "Jovian atmospheric dynamics: An update after Galileo and Cassini". Reports on Progress in Physics 68(8)

The thickness of Jupiter’s vortices is unknown, but dynamical arguments suggest that they are thin compared with a planetary radius. The rapid evolution and short dynamical lifetimes of most Jovian vortices argue against them being Taylor columns that penetrate through the molecular envelope. Furthermore, the non-zonal airﬂow that occurs in these vortices would violate the Taylor–Proudman theorem, especially for the largest vortices such as the Great Red Spot, if they were Taylor columns. Upper tropospheric and lower stratospheric temperature measurements imply that most large vortices extend only 2–4 scale heights (40–80 km) above the clouds (Conrath et al 1981). A recent series of multi-layer, quasi-geostrophic numerical simulations by Dritschel and colleagues (Dritschel and de la Torre Juarez 1996, Dritschel et al 1999, Reinaud et al 2003) show that three-dimensional, geostrophically balanced vortices tend to be baroclinically unstable if their thickness exceeds their width by a factor greater than $∼f/N$, where $f$ is the Coriolis parameter and $N$ is the Brunt–Väisälä frequency. In the sub-cloud troposphere of Jupiter, the latent heating associated with condensation of water might produce a characteristic Brunt–Väisälä frequency ∼0.002 $\text{s} ^{−1}$. If so, vortices such as the Great Red Spot and White Ovals probably extend less than ∼500 km below the clouds.

(Original emphasis.) I don't understand all the terminology above, but in context I interpret it as saying that the GRS is probably not the end of a linear vortex extending deep into the planet but instead is a fairly shallow closed vortex that doesn't penetrate into the metallic hydrogen layer. (500 km is a big number but is quite small compared to the observable dimensions of the red spot, which are of the order 10,000 km.) But at the same time the language is quite hedged and I get the impression that this is not a closed case.

In general it's interesting how little is known about the flows in the interior of jupiter, and from skimming this paper it seems that opinion is pretty divided about whether the features we can observe are confined to a shallow surface layer, or whether they're only the visible part of much deeper structures. It seems like a very interesting field with plenty of room left for surprises.

Not the answer you're looking for? Browse other questions tagged astronomy fluid-dynamics planets atmospheric-science jupiter or ask your own question.

1
Why is the Great Dark Spot so shortliving unlike the Great Red Spot?

3
If a hot Jupiter was not tidally locked, then are there any specific cases where its wind speeds would be milder than those found on Jupiter?
5
Shadow of a Jovian moon over the Great Red Spot
3
Could heat detected from Jupiter's red spot explain the temperature of the Sun's corona?
1
How much does time-dilation effect our observance of the most massive objects in our solar system?
2
Red colour of the Great Red Spot