How to start moving in at $Re\ll1$

I find it difficult to see how something can accelerate (and therefore increase its velocity, e.g. start to move) in a $Re\ll 1$ situation.

It is customary, at low Reynolds numbers, to ignore inertial effects. This means that the nonlinear terms in the Navier-Stokes equations vanish. One can prove from the resulting equation (Stokes' equation) that, for example, if a sphere of radius $R$ is placed in a fluid of viscosity $\eta$ and local velocity $v$ (in a configuration at which $Re\ll 1$), the drag force experienced by the sphere will be

where $\eta$ is the dynamic viscosity of the fluid, $R$ the radius of the sphere.

What does this mean in terms of the force balance on the sphere?

Let's assume that I apply a driving force $F$ on the sphere, and I apply Newton's 2nd Law to this situation

where $f_D$ is the drag force. Does this imply that the motion of the sphere is given by the solution of the ODE above?

Or is the acceleration always going to be zero because of the absence of inertia? How can one justify this in the formalism used above? By imposing that the inertial mass $m=0$?

Edit: The following extract, from this well-know review on microswimmers, hopefully justifies the doubts about whether acceleration is meaningful or not in this context. The authors had first stated: "Since swimming flows are typically unsteady, we implicitly assume the typical frequency ω is small enough so that the frequency Reynolds number $\rho L \omega^2/\eta$ is also small." 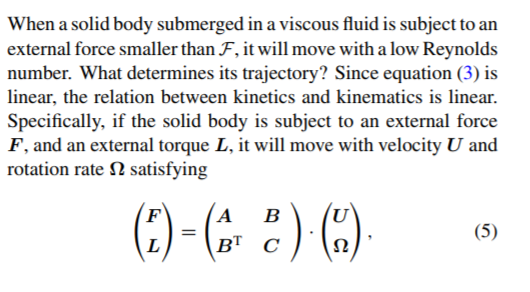 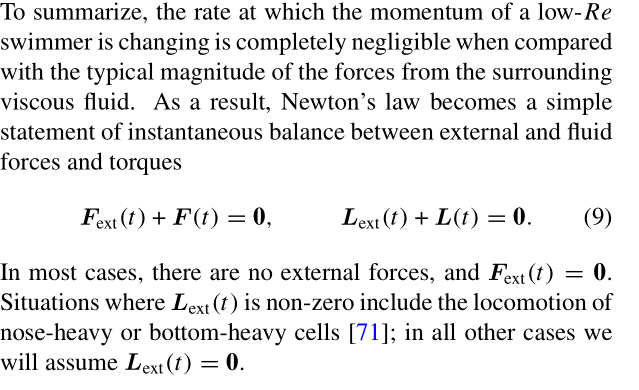 I think you might be mixing up the acceleration of the fluid and the acceleration of the sphere. The motion of the sphere is governed by $F = ma$ and the expression you have is correct. On the other hand, the inertial terms of the Navier-Stokes equations describes the motion of the fluid only. Recall that the dimensionless Navier-Stokes equation is given by \begin{equation} Re\left[\dfrac{\partial \vec{u}}{\partial t} + \vec{u} \cdot \nabla \vec{u}\right] = -\nabla p + \nabla^2 \vec{u} \end{equation} When Reynolds number is small ($Re \ll 1$) we say that the inertial terms are negligible, in other words the products $Re\dfrac{\partial \vec{u}}{\partial t} \ll 1$ and $Re(\vec{u} \cdot \nabla \vec{u}) \ll 1$. This does not necessarily mean that $\dfrac{\partial \vec{u}}{\partial t}$ is small or zero, only that the product of it with $Re$ is small.

Sometimes people will say that $Re = uL/\nu = 0$ in a Stokes flow which can be a useful simplification in models but is inaccurate for physical problems. If $Re$ were truly equal to zero, that would correspond to zero velocity, zero length scale, or infinite viscosity which cannot be true in physical problems. Therefore it is better to think of Stokes flows as the regime where $Re \ll 1$ and not as $Re = 0$. In models we consider $Re$ to be close enough to zero such that inertial terms can be neglected and simplify the problem.

You are right. Swimming is impossible if Re<1. The forward motion is neutralized by the backward motion.
The only way to create propulsion is the screw. That's why the small swimmers has a long tail, they are rotating it, instead of flapping it back and forth.

This all is explained well in this old National Committee for Fluid Mechanics video (at ~28:30 is the demonstration) https://www.youtube.com/watch?v=51-6QCJTAjU This picture below is from the video notes: 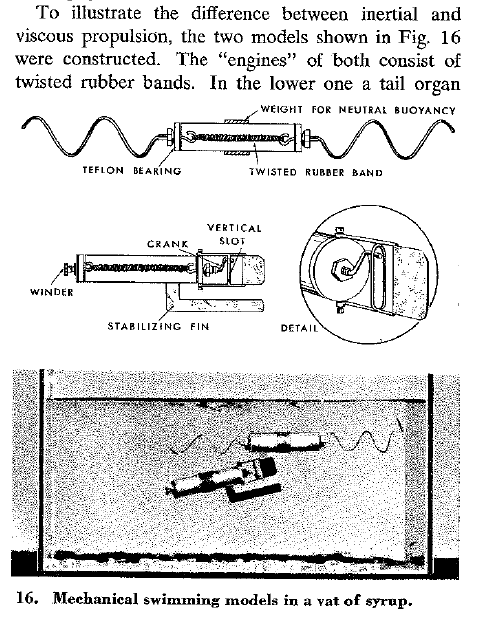 In the frame linked to the sphere, you would have to add an inertial volume force $-\mu a$ if $a$ is the acceleration of the sphere.

Not the answer you're looking for? Browse other questions tagged newtonian-mechanics fluid-dynamics viscosity or ask your own question.

3
Determine viscosity using falling sphere (Stokes Law, Ladenburg correction)
6
Stokes law in 2-dimensions
1
Does Stoke's drag formula apply even in the absence of flow?
2
Drag Force VS Stoke's Force
1
Why is it much more difficult to horizontally throw a toy balloon than a football?
2
Is Stokes' law, for drag force in fluids, accurate?
1
The formula for Stokes law when there is an initial velocity
0
Why does Drag force equation contradicts the relationship between Reynolds number and drag coefficient?
1
Drag force on settling sphere