The formula for Stokes law when there is an initial velocity

Question: When there is an initial velocity $u$ on the spherical object such that Reynolds number is not too large, what will the terminal velocity of the object be? (a formula or an approximation)

Here is my attempt to derive the equation:

Now, we have another equality involving the buoyancy force when the terminal velocity is reached, $$6\pi\eta r v_T+\rho_S \dfrac{4}{3}\pi r^3 \dfrac{dv(t)}{dt}+\rho_f\dfrac{4}{3}\pi r^3 g=\rho_S\dfrac{4}{3}\pi r^3g$$ This nearly gives a complete solution, but there is a $\frac{dv}{dt}$ term that remains unkown. I believe that this can be obtained by analyzing the motion of the spherical object, but I'm unable to solve it... A potential strategy might be looking at Archimedes' principle and establish a differential equation to solve for $v(t)$. Since the change of the net velocity must be monotonic (otherwise it doesn't makes sense), I guess that the function $v(t)$ is at least bounded.

You always reach terminal velocity, in some way or another. Let's discuss it in detail, first from the equation you wrote, which we eventually then solve in full.

You have a spherical object of radius $r$ moving in water in the vertical direction you have the following forces acting on it:

Then, Newton's equation reads, as you pointed out,

which is valid from the beginning, not only after reaching terminal velocity!

Now already at this point we can tell some things.

Let's assume that we have an initial velocity $v_0$ which is lower than the limit speed and such that $-6\pi\eta rv_0 + \Delta\rho {4\over 3}\pi r^3 g >0$. Gravity pushes the particle down, Stokes' law slows it down, but gravity wins. This causes an increase in the speed $v$, which increases Stokes law and at some point $v$ will be big enough for Stokes law to completely compensate gravity and the the acceleration stops and the speed stays constant, which means that the acceleration stays constantly at 0 and nothing more happens: the sphere falls at a limit velocity $v_f$. So if we start with $v_0<v_f$, even if $v_0\ne0$, then we end up at the limit speed anyways, we just take a shorter time to get there.

If on the other hand $v_0>v_f$ then $-6\pi\eta rv_0 + \Delta\rho {4\over 3}\pi r^3 g < 0$ which means that the particle decelerates: Stokes' law is stronger than gravity and pushes towards the top. However, the particle already has some speed towards the bottom so it does not rise, it goes towards the bottom but slows down. At some point, again, because of the deceleration, the particles reaches a speed such that $-6\pi\eta rv_0 + \Delta\rho {4\over 3}\pi r^3 g=0$ and the acceleration is now $0$ which means the particles goes again at constant speed. So again, we end up with a limit speed $v_f$ except we got there not by accelerating but by de-celerating.

So even if you have a starting velocity, you always end up at $v_f$ because that's how Stokes law works: it opposes changes in velocity ($dv/dt\sim -v$) so that the acceleration always points in the opposite direction of the instantaneous speed.

and you see that, if there is no gravity ($g=0$) the particle simply does not move at terminal velocity, because there is nothing to counter the slowing-down due to Stokes': the particle just stops where it arrived thanks to its initial velocity - and if $g=0$ you also have no Archimedes' force to push you back up. Also, if $\Delta\rho<0$ (i.e. water is denser than the particle), you get a negative limit velocity as you go down, slow down because of both Archimedes and Stokes' and then go back up thanks to Archimedes which starts winning when the speed is small and Stokes vanishes, and now Stokes changes direction (now pointing downwards as the speed is upwards) and it now opposes Archimedes, so that the particle reaches again terminal velocity but on the way up.

But we can also solve the full differential equation!

Let's simplify it a bit as

which is a simple differential equation with a general solution

The only thing that changes is that the closer $v_0$ and $v_f$ are, the shortest time it is necessary to reach terminal velocity. 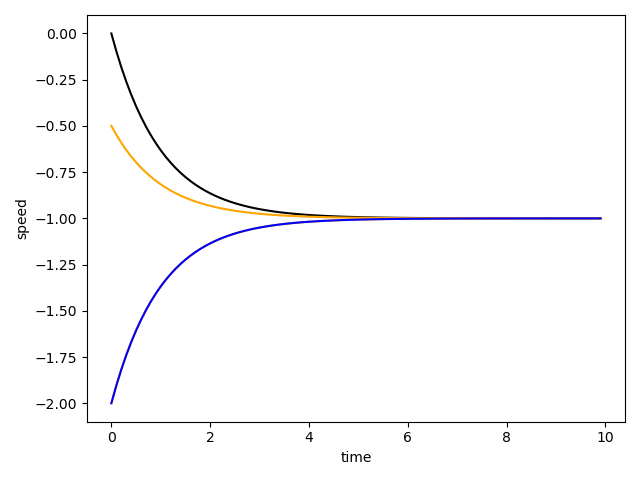 Not the answer you're looking for? Browse other questions tagged newtonian-mechanics fluid-dynamics navier-stokes or ask your own question.

0
Finding the drag force (Air resistance force) for accelerated ball?
0
Maximum displacement of a projectile with $x$ initial velocity and drag resistance
1
Does Stoke's drag formula apply even in the absence of flow?
2
Drag Force VS Stoke's Force
2
How to start moving in at $Re\ll1$
0
How does an increase in the drag force impact the drag coefficient?