It is well known that the method of image charges describes how if you have a charge near a conducting plate one can obtain a correct expression for the potential and E field by assuming that (a) the charge is reflected in all nearby conducting surfaces with opposite sign, (b) any image charges in metal plates are themselves reflected, and (c) the E-field always is normal to the conductor.

This works because of the uniqueness and existence theorems of Laplace's equation with the boundary condition of the metal conductor -- and the motion of image charges explains lots of wonderful things, e.g. [Graham]-Smith Purcell radiation can be explained by image charges alone.

My question is this: imagine I have three semi-infinite conducting plates meeting at a vertex 120º apart, with a charge $+Q$ placed on one of the other axes of symmetry.

The image charges I'll get will be placed in the points of an equilateral triangle, and according to the "rules" above they'll be apparently inconsistent: each reflected charge should be both $-Q$ and $+Q$ simultaneously, as can be seen by either going clockwise or anticlockwise around from the solid "real" charge below: 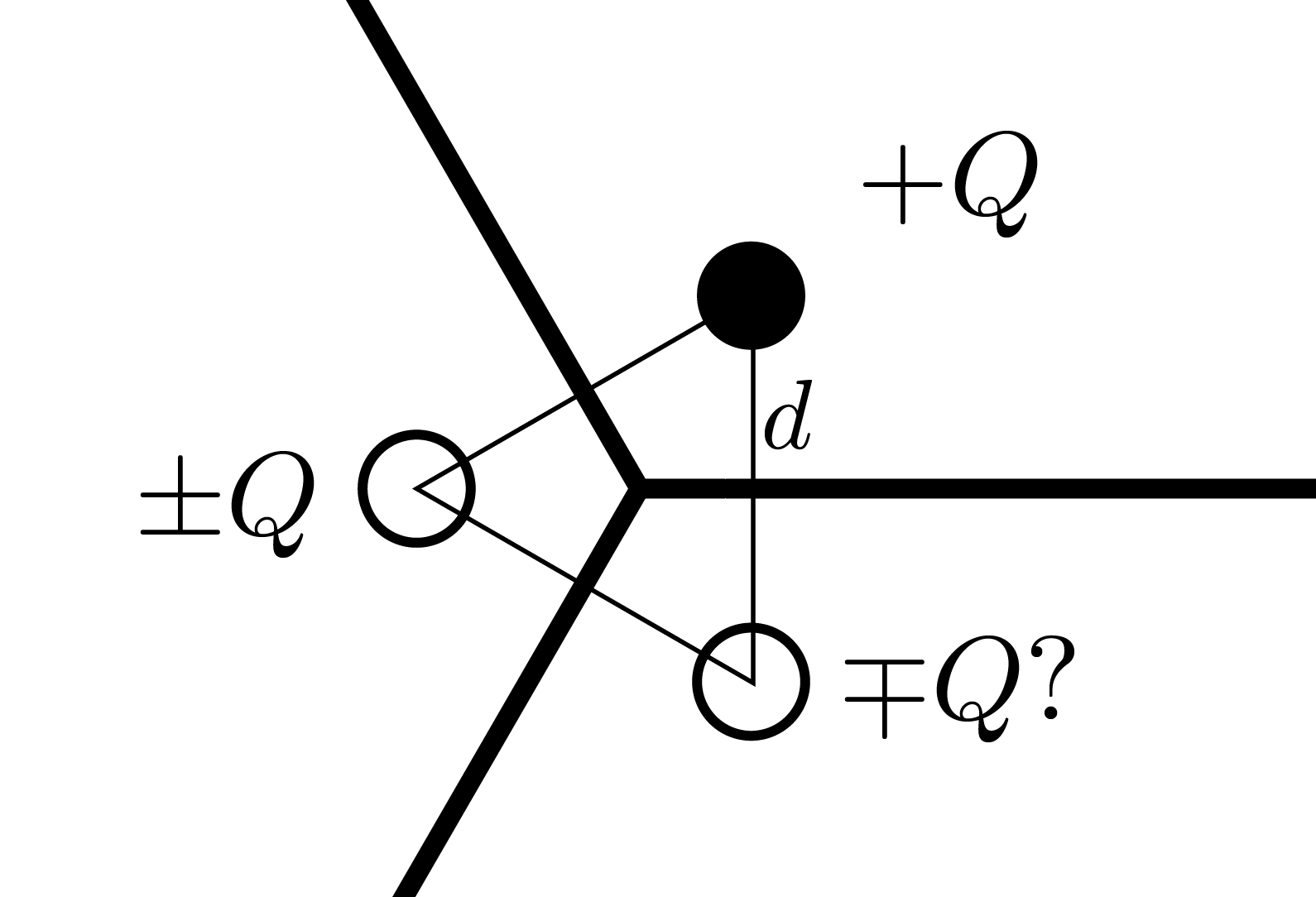 What does the picture of image charges look like, and why? Doesn't it look like the distribution of images is inconsistent with itself? How you reconcile the "classical" image charge explanation that is often given in first-year textbooks with this one. (Likewise, what happens if the angle is anything that would give you an odd number of charges, such as a pentagon rather than a triangle?)

To know what the "right answer" is, I performed some EM simulations by numerically solving Laplace with a charge of +10 C on a 5 mm sphere with d=30 mm, surrounded by either (a) three infinite equipotentials:

This qualitatively is consistent with having two $-Q$ spheres below:

Why? How do I explain this "simply"?

There's nothing "inconsistent", it's just that the method of image charges doesn't work in this situation, in the sense that there is no simple arrangement of image point charges that will enforce the desired boundary conditions. In fact, the method of images almost never works, it only works for a small number of highly symmetric boundary conditions, so this isn't really surprising.

Furthermore, contrary to what the other answer says, you can't fix the situation by moving the charge. If you do this, the method of images will fail in an even worse way: reflecting in the planes will force an image charge to appear in the physical region (i.e. the sector where the real charge is), while the whole point of image charges is that you can satisfy boundary conditions by putting charges in unphysical regions alone. 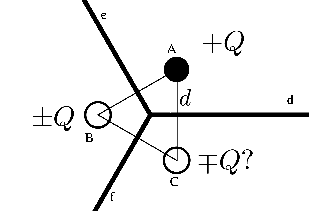 First of all, the real charge is screened by the conductive plates. Its presence affects only the top-right space, i.e. the space between the plates "e" and "d". Thus, the first simplification is to remove the plate "f". Only two plates, "e" and "d".

So the "paradox" is simply that we want to make the reflection of a charge which stays on the reflective surface. This is not difficult to solve: just, displace the charge by $\epsilon$, and send $\epsilon\to 0$.

Summarizing: first, displace A from its unlucky position, just a bit, $\epsilon$. Make the (infinite number) of reflections, of the real charge and of all the image charges. Make the infinite sum. Send $\epsilon\to 0$. The result could be correct if i) the procedure converges; ii) all the image charges are beyond the plates with respect to the real charge A. But in general, you cannot say.

0
Charge present at the centroid of equilateral triangle
1
Force on a charged particle due to an uncharged infinite conducting plate
1
Induced charges on conducting plates
5
Method of images for intersection of two planes
1
Can law of conservation of energy be violated?
1
Electric Fields 'passing' through conductor material
0
What happens when an external agent changes charge on a working capacitor?
1
Uncharged Conductor perpendicular to two infinite plates