Method of images for intersection of two planes

Vanderlinde's Classical Electromagnetic Theory discusses the method of images, with examples given for intersecting infinite conducting (half) planes. In particular, the "kaleidoscope" effect of alternating image charges for planes intersecting at 90° and 60° is mentioned.

The reader is also invited to reflect (ho ho) on what happens when the angle of intersection is 72°. The discussion seems to suggest to me that in this case, the alternating charges for the image points would end up cancelling each other, leading to a constant field. If so, that would seem to imply that in the original problem, the charge distributions on the conducting planes would conspire to cancel the field between them out.

However, I'm not at all confident this is correct, and I haven't been able to find an alternative source to verify/invalidate this gut feeling. Am I anywhere near the right track?

Edit: Apologies for incomplete details. From the text, which is discussing the method of images for point charges and planes:

A charge placed near the corner of two intersecting plates has images not only behind each of the conducting planes, but each of the images in turn has an image in the other planes and so on, very much like an optical image. Thus when two plates meet at right angles, a negatively charged image “appears” behind each plate, and a positive image lies diagonally through the point of intersection. It is not hard to see that this arrangement does indeed lead to equipotential surfaces along the planes defined by the conductors. When the planes intersect at 60◦, five images of alternating sign will be required (the kaleidoscope is the optical analogue of this arrangement). Clearly when the angle is not commensurate with 360◦, this method will not work because an infinite number of images would be required. The reader might reflect on what happens when two conducting planes intersect at 72◦.

I had mistakenly assumed that the case being discussed involved symmetrically placed charges, so that following the image process naïvely would lead to positive and negative images coinciding.

The problem with the method of images when the angle of intersection is an odd fraction of a revolution is that it requires you to add extra image charges within the domain to be solved, which can then lead to unphysical singularities in the resulting solution.

For comparison, this is how the method of images works with two half-planes at a 60° angle, with some artificial offset added to show how the image charges return to each other so that you only need six charges in total: 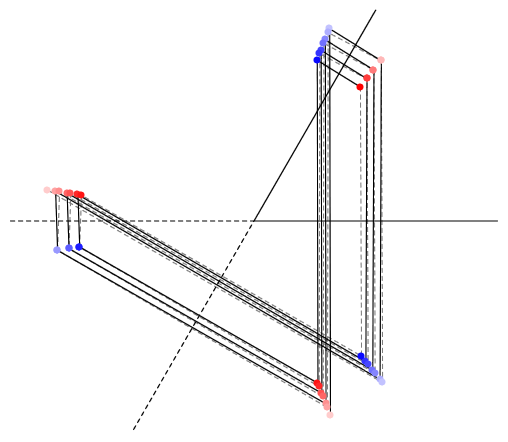 Now consider the case where the planes are angled at 72°: 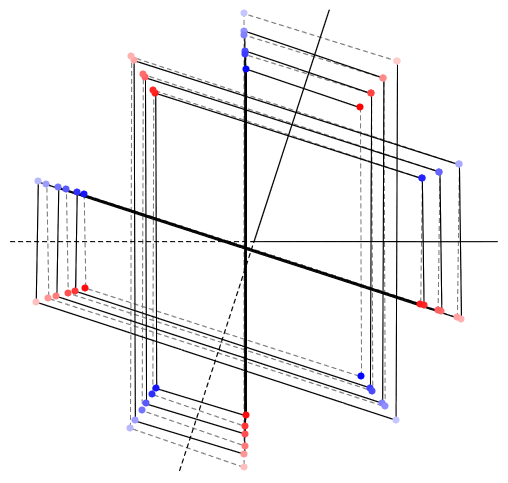 Note that the sign of the image charges is steady, but that you're required to add an image charge, of opposite sign to the initial point, that's within the sector you're solving for. That tells you that the method of images can help you solve for situations where you start off with two symmetrically-placed charges of opposite sign (or, equivalently, with a sector angle of 36°), but if you don't then the method will introduce a singularity in a region you do care about (as opposed to the even-partitions case, where you add a bunch of singularities in regions that are not of your concern).

This also explains what likely went wrong with your calculation: with this type of procedures, it is very tempting to take the initial charge at the center of the sector, but that should generally be avoided: in this case, for example, the unwanted image charge overlaps with your initial charge if the latter is in the middle of the sector, but that is not the generic behaviour. Instead, it is normally best-practice to start with some non-symmetric configuration so that you can get a better idea of what happens for generic inputs.

Not the answer you're looking for? Browse other questions tagged homework-and-exercises electrostatics potential method-of-images or ask your own question.

5
A point electric charge in an angle sector: does the Green's function expansion simplify to the method of images if the angle is right?