I have some doubts about situations with charges between two conducting plates.

Consider two isolated conducting plates (the white ones) of section $S$, which are assumed to be infinite. Between the two plates is inserted a point charge $A$ with charge $q$ at distance $x$ from the left plate. 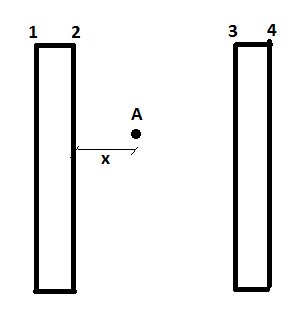 And if the two conducting plates are connected with a wire, do these two distributions $\sigma_1$ and $\sigma_4$ change?

The simple answer is,

1- σ1 is not equal to σ4 beacuse the charge is not in the middle of the plates. Thus, it polarises each plate with unequally. But σ1=σ2 and σ3=σ4 because all charges moved from one surface of the plate must have gone to the other surface.

2- Not exactly σ1=q/2S or σ4=q/2S unless the height of the plates were also infinite or much much longer then the distance between the plates.

3- And the charge distributions on each surface of each plate is not uniform because a point charge will push the charges as far as it can and compress them in the edges of the plates. Check out the examples below.

The elaborated answer is that,

Electric fields penetrate everything (Examine Gauss' Law for a point charge in an enclosed surface).

And E fields, polarise everything that has at least 1 electron and 1 proton. The polarised material produces an additional Polarisation Field (P Field)

The total electric field is called The Electric Displacement Field (D Field) and is the sum of (superposition of) the E and P vector fields. Hence D=E+P simply.

The geometry (divergence) of the D field differs alot due to the shapes and electrical properties (like dielectric coefficient) of the polarised materials.

But generally the E field of the charge appers to be "refracted" or "deflected" by the polarised material (just an analogy, there is no such thing as "refracting an E field"). I mean, the E field will be weakened in some directions and strengthened in others so it "appears to be refracted" (with the exception of concentric spheres. I will come to that).

You see that it's all about the mobile charges being forced to move, trying to reach an electrostatic equilibrium state locally. But outside of the local, the material and the point charge have a net complex D vector field. This is fundamentally because the E field decreases exponantially due to distance.

And "in the case of concentric spherical conductors" the D field outside the spheres must be uniform because the charge distribution will be uniform. I guess this sounds confusing. How can a sphere has an isometric D field with a point charge breaking the isometric symmetry (unless it is at the center of the sphere).

The tricky part is, however the isometric symmetry is broken relative to the center of the sphere by the E field of the point charge, the polarisation of the spheres will be just the opposite of that "to make up for it" so that the sum of them (D field) outside of the sphere will be symmetrical eventually. 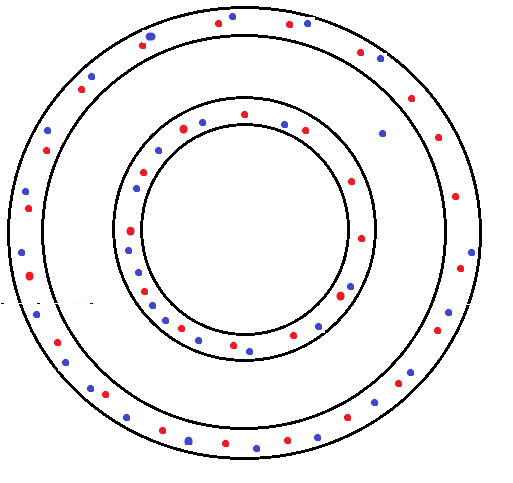 You can also imagine this with a single hollow sphere or as many concentric spheres as you like.

Read under title "3.1 ELECTRIC FLUX DENSITY" and reconsider the situation in the experiment by replacing the inner sphere with a point charge anywhere inside the outer sphere.

The situation of the concentric spheres would be the same as your two plates if the height of your plates were infinite. Only then, your plates would completely surround the point charge.

I hope I answered more questions than I caused.

Short Answer: yes the distributions on surfaces 1 and 4 are uniform.

The reason the charge distributions on the inner surfaces are non-uniform is because the position of each charge is influenced by the electric field/potential of the charge at A. However electric fields can not penetrate into/through a conductor and therefore do not travel through the conducting sheets.

This means that the charge on surfaces 1 and 4 is free from the influence of the charge at A. The charges are hence free to arrange themselves in any distribution on the surface of the sheets and the uniform distribution is the one that minimizes energy and thus is chosen.

(PS this is the identical reason the conducting sphere situation you described behaves as it does, and indeed all conductors which can completely 'screen' a charge)

1
How are charges redistributed on a system of parallel conducting plates?

0
Parallel plates with differing charges
10
Grounding system of conducting plates
1
Why doesn't the charge on capacitor plates flow from one plate to the other?
1
Two positively charged plates - can the electric field be negative inside?
1
Why do charges redistribute themselves on parallel conducting plates? Vector field vs field line view?
1
Gauss's Law on Parallel Conducting Plates
0
Is charge conservation violated when inserting a dielectric in an isolated capacitor?