How can I calculate the force on a charged particle due to an uncharged infinite conducting plate?

If there is a small object with positive charge placed above a metal plate, the object induces a negative charge on the surface of the plate facing the object. Let's call this surface as $S_1$.

Since the conductor was uncharged initially, and charges always reside on the surface of a conductor, $S_2$ gets a positive charge. 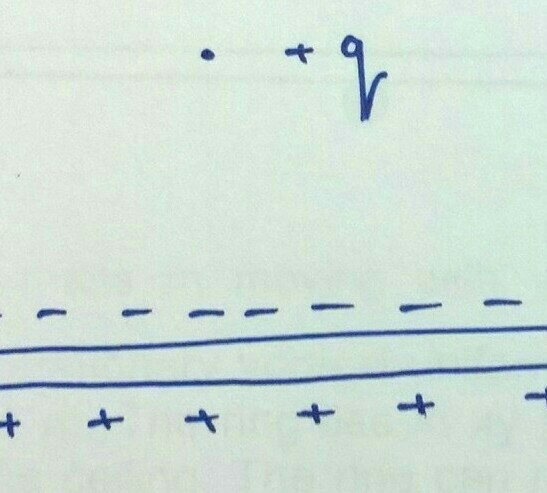 This the kind of question that can be solved by the method of images.

Try placing a fictitious charge on the other side on the conducting plane. You should arrange it in such a way that the electrostatic potential is precisely zero on the surface of the conductor. If your case you put it at equal distance as the first but on the other side.

The physical interpretation is that the electrons in the neutral conductor will rearrange themselves because of the field from $q$. Since the conductor is infinite the charges will not go from one side to the other. They will rather be brought in from infinity.

Not the answer you're looking for? Browse other questions tagged electrostatics conductors or ask your own question.

3
What happens when a conducting plate is grounded?
4
Electric field due to a charged conductor
0
Parallel plates with differing charges
3
What does earthing do in electrostatics?
2
Force on a charge placed in conducting shell
0
Can total charge be transferred from a conductor to another isolated conductor?