Can the deflection of an electron beam create a Lorentz Force capable of propelling a spacecraft?

Please reference the conceptual drawing below of this spacecraft propulsion idea. In the vacuum of outer space, if a strong electron beam enters a strong magnetic field, as shown in the drawing, it should be deflected away from the magnet as it travels through that magnetic field. The deflection of this electron beam due to Lorentz Force should exert a perpendicular force against the magnet and the magnet should be repelled away from the electron beam at a perpendicular angle to the beam. With the electron gun and magnet being fastened to the stern of a spacecraft as shown below, then the spacecraft should be propelled in the direction of the Lorentz Force.

If this electron beam is say equal in power to one commonly used in welding and if the magnet is say a very strong Neodymium permanent magnet (or a strong electromagnet), will the deflection of this electron beam create a Lorentz Force strong enough to propel this spacecraft?

This drawing only shows one electron gun-magnet pair to make it easier to convey this conceptual idea, but ideally there will be two pairs fastened to the spacecraft's stern. The second pair (not shown) would be flipped 180 degrees when compared to the first pair in order to create a Lorentz Force that is perpendicular to the other Lorentz Force and the combination of these two Lorentz forces should make the spacecraft move straight ahead.

To address the issue of this spacecraft building up an enormous positive charge due to the discharge of electrons, this spacecraft could incorporate the technology used in NASA's Heliopause Electrostatic Rapid Transit System (HERTS). That system is designed to use its positively-charged tethers to repel protons flowing in the Sun's solar wind to generate its propulsion, and the collected electrons from the solar wind are discharged via its electron gun. 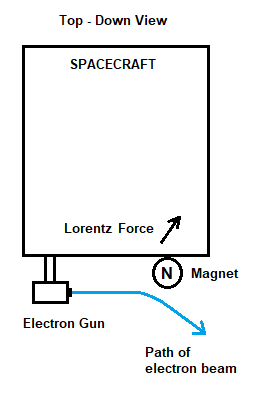 Anything that throws mass rearward can propel the spacecraft; and electrons have mass and are easy to accelerate to very high velocity.

Note, however, that if only one kind of charge is thrown, the spacecraft will build up an enormous charge of the opposite sign. So you would need to throw protons or other positively charged ions at the same time you're throwing electrons, to balance the charge.

Also, there is no need to use the magnet. You will achieve exactly the same thrust by simply pointing the electron gun rearward.

There are various kinds of ion thrusters that produce essentially what you are reaching for: a very high-velocity neutralized ion beam.

11
How can I explain or demonstrate the Lorentz Force to a 12 year old?
2
Influence of Lorentz force on Eddy Current
0
Reactionless propulsion theory. Will resistance to the flow of electricity within a moving conductor result in a propelling force?
3
Will pyrolytic carbon/graphite repel the Sun's solar wind?
4
The motion of an electron accelerating in a uniform magnetic field
3
Does the Stern-Gerlach experiment really suggest superposition?
2
Stern-Gerlach with particles that are not electrically neutral. Can I "ignore" the Lorentz force?
2
Shouldn’t the Lorentz force acting on an electron increase it’s tangential speed?