Reactionless propulsion theory. Will resistance to the flow of electricity within a moving conductor result in a propelling force?

I believe that a conductor which is physically moving in the opposite direction to the flow of electricity will result in the motion of the conductor being resisted and this resistance will cause the mechanism which is moving the conductor to experience a propelling force.

Please reference the conceptual drawing below.

During each revolution of the disc, there will be two momentary DC electrical current flows across the copper strip via contact with the two brushes (colored light blue).

When electricity has to flow against the physical flow of the copper atoms of the copper strip (as shown in the drawing), it should produce a drag on the copper atoms and this resistance should result in the electric motor having to apply more torque to maintain its set RPM and this should cause the motor to move via Newton’s 3rd Law of Motion.

Thus, during each revolution of the disc, the electric motor should experience a propelling force in the direction indicated in the drawing and this should create propulsion for the vehicle.

Will resistance to the flow of electricity within a moving conductor result in a propelling force?

Rephrased question in the Title and in the Body text. Also, made changes to drawing and reposted it. 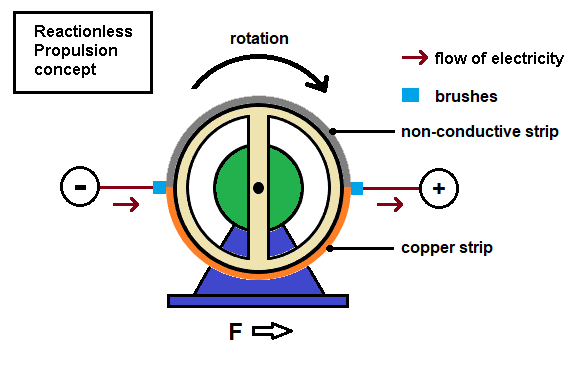 Will resistance to the flow of electricity within a moving conductor result in a propelling force?

No. The system you've invented is well described by classical mechanics and elecrtromagnetism, in which momentum is conserved.

1
Will electricity follow a path of least resistance on a rotating conductor?

8
Why does electricity need wires to flow?
5
Lightning Conductor Working
0
What does ground in electricity actualy means, and why current flows through me?
1
Will electricity follow a path of least resistance on a rotating conductor?
3
Will pyrolytic carbon/graphite repel the Sun's solar wind?
0
Does a person at the top of a tall building receive less electric shock compared to a person at a lower level?
2
Flow of charges
1
Can an electric current be created within a closed loop of wire using an electric field?