In the case where the object is placed at focal point F of a converging lens, the rays of light (the one passing through O and the one sent parallel to the principal axis never meet) so I am assuming that the image of that object at that specific position does not exist. However, in my class notes, the teacher has said that the image is formed at infinity. I searched and then I found three answers:

The weird thing about these answers is that they say that the image is a real image. How can image be real if it does not exist to start with?

I am confused. Does it exist or does it not? And what about the 3rd common answer I mentioned above? Why do some people say while explaining the case where object is on F, that "when the object is between F and lens but very close to F...'"? It is very confusing.

The image could be real or virtual. We'll start with a real image. Also, we'll consider a point object and an ideal lens.

For a real image of a point to be formed, the rays emitted by or reflected from that point have to converge at some other point in space.

If a point (blue dot on the diagrams below) is placed in a focal plane of a convex lens and its rays, collected by the lens, are coming out parallel to each other, they, obviously, are not going to to converge and, therefore, are not going to form an image. 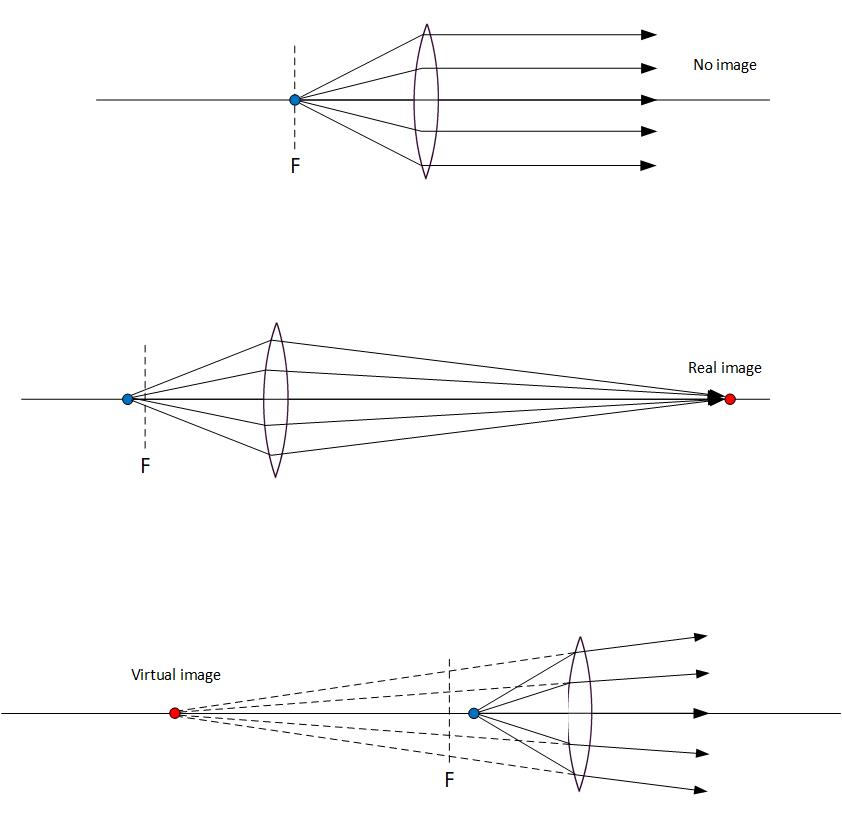 If a point is placed in front of the focal plane, the rays are going to converge and form a real image.

If a point is placed behind the focal plane (i.e. between the focal plane and the lens), the rays are going to diverge and, therefore are not going to form a real image. If the diverging rays are extended backwards, they will meet at some point (of the apparent divergence) behind the lens, forming a virtual image.

Hopefully, this clarifies the picture.

Now move the object so that it is at the focal point. The emergent refracted rays will be parallel and thus will never meet. However if one assumes that parallel rays meet at infinity then for convenience one can say that the image is formed at infinity. This is situation 1.

Continue moving the object until it is at the focal point and now the refracted rays will be parallel and so the back produced rays will never meet, or you could say meet at infinity to the left of the lens. This is situation 2.

Not the answer you're looking for? Browse other questions tagged optics lenses imaging or ask your own question.

0
New focal point of converging light through a concave lens
2
What is the actual significance of the focal point of a lens?
1
determining focal length of converging lens
2
Seeing virtual image in convex lens of object kept beyond focal point
1
Prove that a converging lens has 2 object distances for which there exists an image
3
What happens in a two lens system with two converging lenses when the object is placed at the focus of the first lens?
0
How does a diverging lens in a Galilean telescope form an image at infinity when its object is at its focal plane?
4
Why do we see a blurred image when the screen is not placed at the position where the image is formed by a convex lens?
0
Why does a converging lens create an upside down virtual image with an object further than the focal point?
0
Where is the "infinity" where image of an object kept at focus of a convex lens being formed?