Propagation of wave on a stretched string

I'd like to describe a scenario in which a wave pulse propagates on a string.

Consider a long string with one end fixed to a wall and the other held by a person. Suppose the person snaps his hand a little up and down producing a bump in the string near his hand. The operation takes a very small time, say one tenth of a second after which the person still stands holding the string in his hand.

If the source is active for some extended time repeating its motion several times, we get a wave train or a wave packet. For example, if the person in figure (15.2) decides to vibrate his hand up and down 10 times and then stop, a wave train consisting of 10 loops will proceed on the string. The last line for me is a problem when analysing a sinusoidal wave. If the person holding the string in figure (15.2) keeps waving his hand up and down continuously, he keeps doing work on the string and the energy is continuously supplied to the string. A very important special case arises when the person vibrates the left end in a simple harmonic motion. The wave produced by such a vibrating source is called a sinusoidal wave.

I thought that a certain number of "bumps" will move on the string in the same fashion even for a wave train. How does it move as shown in figure (15.4). Also, how does the left end and right end keep changing as time progresses?. In figure (15.2), it was just one small bump (the bump never changed) and the same bump moved on the string with speed $v$. How does the configuration of the sine wave keep changing with time and how does it propagate with speed $v$ on the string. For clarity, I would pose my question as:

How does a sine wave / sinusoidal wave propagate on a string. Since its configuration changes with time (as shown in the figure), then how does it move with speed $v$ on the string by changing its configuration at the same time. For a wave pulse, it was just one configuration and it kept moving with constant speed. Obviously the particles of sine wave keep executing simple harmonic motion vertically, but then how does the wave propagate and move forward with speed $v$? 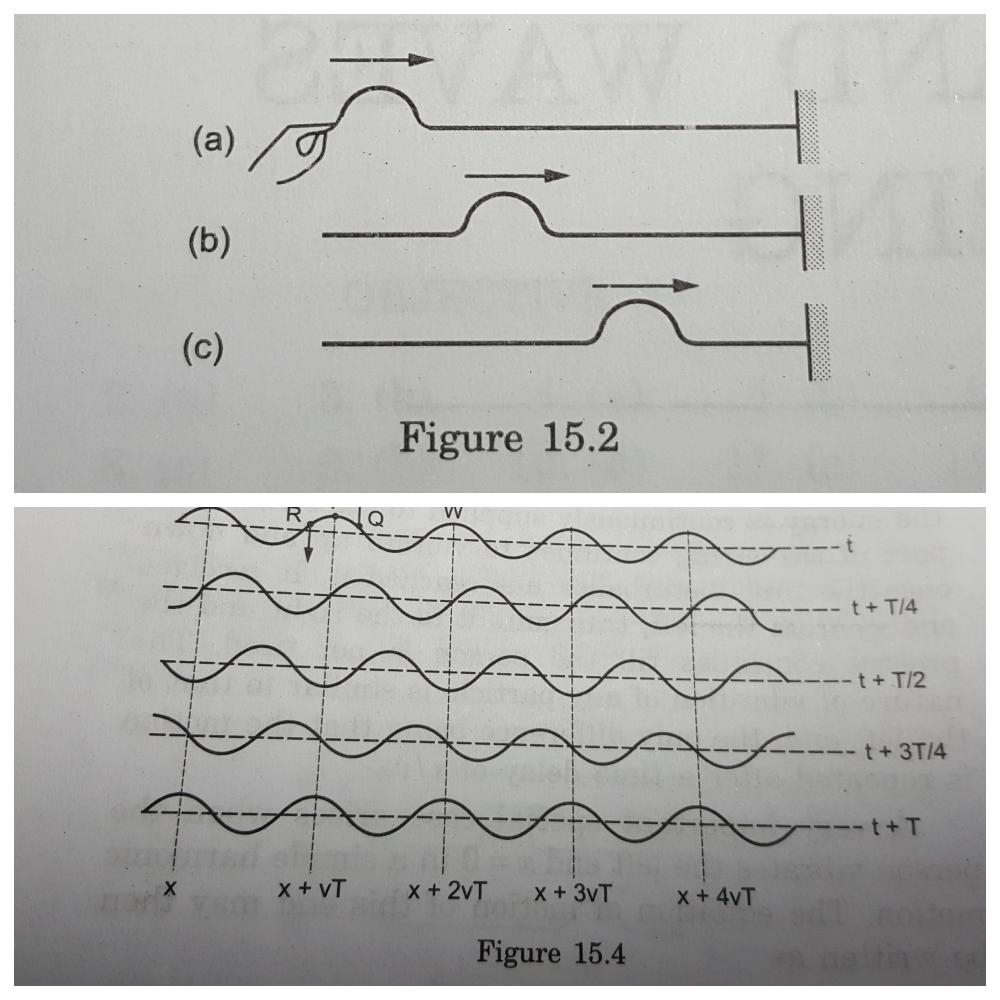 Waves propagating on a string are given by D'Alemberts Formula. And the configuration you describe has both initial conditions and boundary conditions and involves solving a second order partial differential equation known as the wave equation. So it involves complex mathematics.

Pieters suggestion is a good one. Also what you describe would be a 'transverse' wave so the points on the wave would be moving up and down--even for a sine wave. If you look carefully you will see how this causes the wave to move along the length of the string, even though the points on the string move up and down. If you are using a sine wave for certain wave lengths you may see a standing wave where it appears that the wave is not moving.

The wave propagation speed is a function of string mass density and string tension.

(You can Google any of these terms to get more info)

Maybe the best simple way to see how a wave propagates is to see a spring mass model of a string.

For a spring mass model for wave propagation see:

Not the answer you're looking for? Browse other questions tagged waves harmonic-oscillator string wavelength or ask your own question.

2
Wave motion in a transverse wave

2
Why Shock wave propagation is faster
1
An intuitive explanation regarding propagation of mechanical waves
1
Does a square (or any non-sinusoidal) wave a definite wavelength?
5
Why does a transmitted wave get narrower in space?
2
Propagation of standing wave
1
Linear wave superposition along a rope/string