I want to model a behavior of a rolling cube. 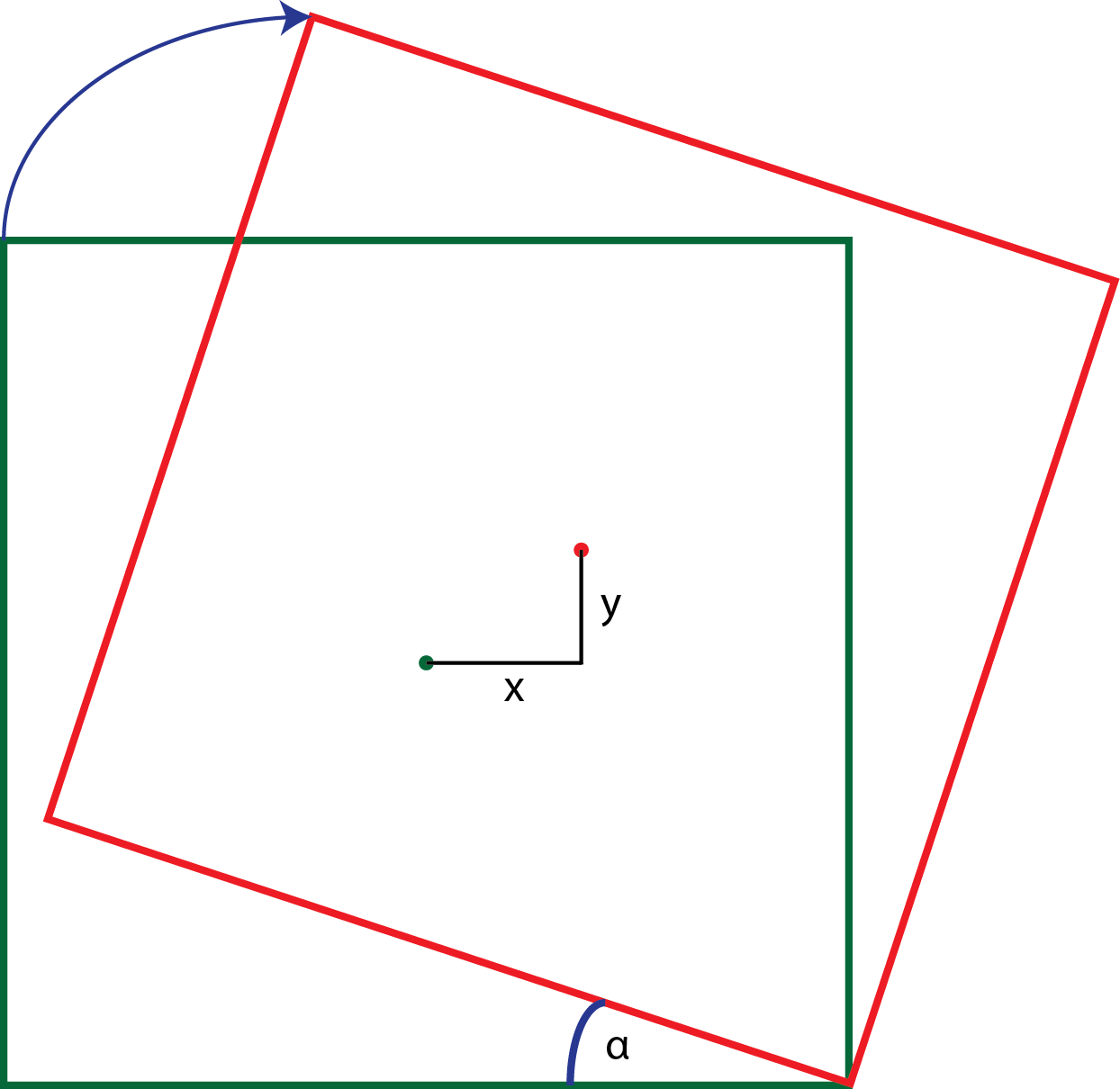 When I apply a given rotation I get proper linear movement. Video.

To be honest I was suprised how complicated are equations for these values.

Now I figured it would be nice to give the rotation animation a realistic feeling. By that I mean that the first 45 degrees would be slow at first and accelerating over time, and the second 45 degrees of the rotation would be a free fall.

From what I remember I need to:

First of all, is this procedure correct? Second of all, can you help me get started with the forces part. I don't really know where to begin, how to apply friction(I assume the rotation happens without any slide).

I was playing with a carton of juice for half an hour, but I cannot figure out how these forces distribute.

I appreciate all the help.

This is a complex problem, so rather than try an suggest an all encompassing solution, let's just look at the forces in play:

In red is the force vector we'll make to act as the driving force $F$, in black gravity, in green the Normal force and in purple the friction force (none are to scale).

Firstly, with no other forces acting in the $y$-direction (vertical), the Normal force is always the floor's reactive force (needed to prevent the cibe from sinking into the floor) to gravity:

Friction will now resist movement in the $x$-dirrection (horizontal) and it's usually modelled as:

In order to prevent sliding:

If $\tau_{net}>0$ then clockwise angular acceleration will occur.

This allows us also to further define $\mu$, as the limit case is:

So the minimum value is:

The angular acceleration is more easily treated as a conservation of energy problem, as the work done by $\tau_{net}$ is equal the change in (rotational) kinetic energy $\Delta K$:

On integrating we have:

So at the end of the 'tumble':

But as the cube now has kinetic energy and the tangential velocity vector is pointing straight down, the cube has to rebound. Neither friction nor the force $F$ can prevent that.

Let's assume that at the angle $\alpha=0$, the cube bounces off the floor with no dissipation of energy. Recall that as you say, the rotation happens without any slide. The energy of the cube (kinetic plus potential) is thus conserved and no external force is needed to maintain its motion.

For this kind of problems, it is convenient to use the Lagrangian formalism of mechanics of constrained systems. Indeed, the problem can be reduced to the motion of the center of mass that is forced to move only along quart-circles; we only need not to forget to consider also the rotational kinetic energy.

Let us introduce the angle $\beta$ which is more natural to the system:

As the motion is going to be "periodical", we will consider only $\beta \in \big(\frac{\pi}{4}, \frac{3}{4}\pi\big)$, which correspond to the configurations between "lying on the side" and "lying on the adjacent side". This system is actually a physical pendulum, although inverted (with the center of mass above the pivot).

To find the equation of motion, express the vertical and horizontal coordinates of the center of mass in terms of $\beta$ and the side of the cube, $l$:

or, in other words

and solved either explicitly using special functions, or numerically.

Edit: In order for the cube to get over the edge and actually roll instead of rocking, one needs to choose sufficiently high initial velocity, encoded in C.

Not the answer you're looking for? Browse other questions tagged homework-and-exercises newtonian-mechanics rotational-dynamics simulations or ask your own question.

8
Why does a ruler continue to slide after toppling?
3
Why does this rotating cube move forward on impact?

1
Cylinder rolling down an inclined plane held by a string
0
2D. Force applied at angle to body, where translational vector will be directed?
1
What causes a tall box to tip over on an inclined plane?
1
How does ground interact with a box rotating around its corner?
6
How to find the center of rotation? (2D)
0
Minimal angle that will cause a cube to tip on an inclined plane
0
How would one compute the path of an particle's motion from forces defined in different frames of reference?