How does ground interact with a box rotating around its corner?

I have some questions about how forces $F$, friction force $F_{friction}$, and normal $N$ interact in order to the box below to turn (clockwise) about the red corner, without sliding. The force $F$ is acting horizontally on the center of gravity (CG) of the box: 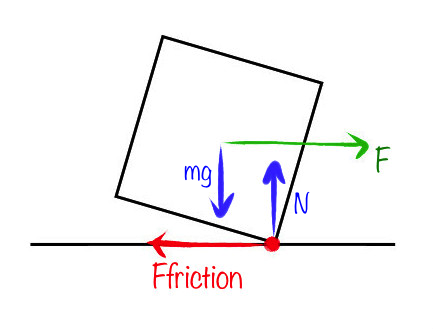 My attempt to understand this scenario:

There must be a non-zero clockwise torque in order to the box to turn. And I want to analyze the rotation about the CG, not about the red corner.

There are two forces which can affect the torque around the CG: $F_{friction}$ and normal force $N$.

Let the net torque about the CG be:

My first question: Should I expect the box start to rotate (clockwise) only when $\tau_{net}$ is non-zero and clockwise?

When torque $\tau_{net}$ is clockwise, the red corner acquires an angular acceleration about the center of gravity. Disregarding the ground for a moment, the position and orientation of the box on a next instant would be the green cube below, on the left. The green arrow denotes the infinitesimal displacement of the red corner - a bit downwards, a bit leftwards): 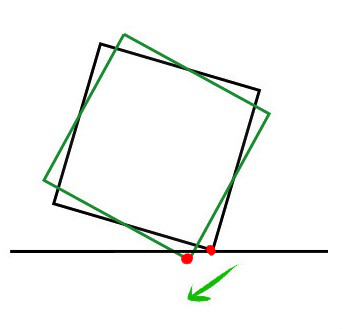 Now comes the part that puzzles me: what happens next? Obviously, the ground will not allow the box to have such displacement - it will prevent the box to "penetrate". But how?

So, my second question: how does the ground acts to prevent the red corner to penetrate it, and at the same time allow the box to rotate?

Maybe I am analyzing using the wrong frames of reference. I'm stuck on this point.

My third question: as the square turns clockwise without sliding, does the friction force $F_{friction}$, in this case, always have the same magnitude as force $F$? Well, at first sight, I think it does, but I'm somewhat uncomfortable with it: I'm wonder if the net torque $\tau_{net}$ is also able to slide the red corner on the ground.

My fourth question: as we've seen above, the net linear acceleration of the CG is zero. I would conclude from that that the CG is static - but it is moving anyways. It describes an arc of a circle as the box turns around the red corner. How does it make sense? Should I look it from a different frame of reference?

Any help on this will be very appreciated.

First lets give the box some dimensions: $w$ for width and $h$ for height.

The scenario you described above is almost correct if $F\,h\leq m\,g\,w$.

So Your first and second questions are answered by the fact that yes $N$ will increase as the box starts rotating, but that increase will allow it to overpower the weight of the box allowing the center of mass to accelerate upwards. Once the center of mass has moved upwards, there is now room for the corner to rotate without penetrating the ground.

For your forth question, the net linear acceleration of the CG is not zero. You are correct that the CG describes an arc of a circle.

If you would like to calculate these values I would proceed as follows:

Of course this solution would only be valid up to the point where friction would give way $F_\text{friction}>\mu_\text{static}N$.

Not the answer you're looking for? Browse other questions tagged newtonian-mechanics rotational-dynamics torque rotational-kinematics or ask your own question.

3
Push a box in a plane with friction. How to deal with the rotation?
0
Can a ball stay still while laying on a inclined plane?
2
What causes a tall box to tip over on an inclined plane?
1
How does this spool have an angular acceleration opposite to its acceleration?
0
How does normal force affect torque?
0
Confusion about torque and net force