What causes a tall box to tip over on an inclined plane?

I'm wondering what makes a tall box rotate about its edge (the red point on the figure below) on a inclined plane (with or without slipping), when subjected to forces of gravity and friction only: 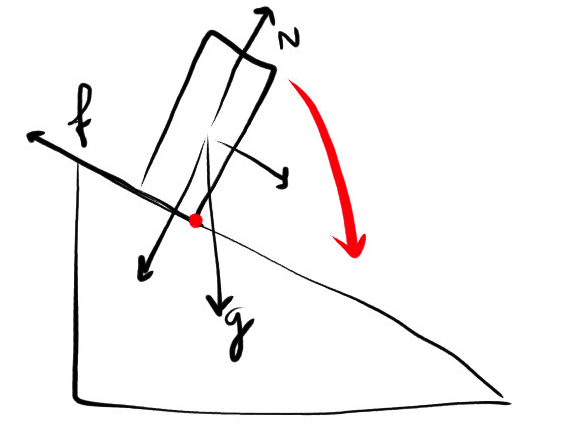 Both the box and the plane are idealized (no imperfections).

According to the answers to this question about a ball rolling an inclined plane, gravity force plays no role in rotating the ball, so I think that is the same case for the box: the gravity force is resolved into two perpendicular components: one opposite to the normal, and the other parallel to the plane, sliding the box down the plane (without rotating it).

In the case of the rolling ball, the friction force is what actually rolls the ball, by applying a torque about the center of the ball at a distance R (ball radius).

I can't see this box rotating about its center of gravity either (as in the case of the ball), because the box has edges which would "penetrate" the plane, as the image below: 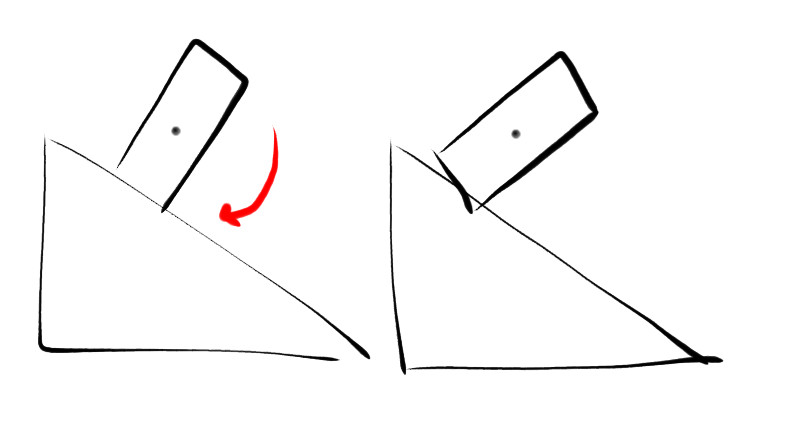 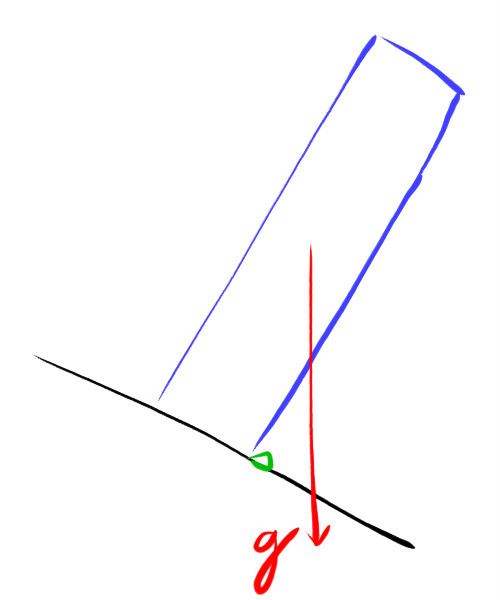 So, is it correct to conclude that the perfect tall box, starting from rest and with its center of gravity pointing outside of this base, would not rotate at all on a perfect inclined plane (it would just slide)? Is there a scenario where it would rotate? And what would be the conditions for slip/no slip?

As far as I know, in absence of friction, the box would just slide without rotating. I think there should be some minimum value for the friction force to make the box rotate without sliding (keep the corner static). And, if the plane is not able to supply that amount of friction, the box would slide while rotating about the corner. But I'm not able to work out these friction values.

In the case of the ball rolling down the plane, the center of gravity of the ball describes a straight line (parallel to the plane) as the ball accelerates down the plane, and the ball has no edges which would penetrate the plane as the ball rotates around its center. Thus I found it easy to see the ball motion as a combination of a translation of the center of gravity (through a straight line) plus a rotation about its center of mass. So I solve the equations for the angular acceleration of a point at the rim of the circle and for the linear acceleration of the center of gravity, and find the minimum friction force required to keep the ball rolling without slipping. If the surface was able to apply this amount of friction, the ball would make a pure roll movement. Otherwise, it would roll and slide.

The problem with attempting to do the analysis with the forward point of contact on the box when it is sliding is that the box is accelerating. This makes a non-inertial frame and there's more moving parts. Besides the force of gravity on the center of mass, there will be fictitious forces.

If you add friction, you will reduce the acceleration of the box, reducing the fictitious force in this frame. When that happens, the net torque would be sufficient to tip a rod, but would depend on the dimensions if a box would tip over.

Sorry, I wanted to reply to this comment, and I couldn't do it in the comment space.

If we instead take the static plane to be the frame of reference (and a minimal width box), wouldn't we get the same results anyways?

The problem is that in the frame of the plane, the axis you want to consider in the question (the front corner of the box) is accelerating. I don't think that's okay to do. Let's imagine a pendulum being accelerated via a force on the axis. And we let it reach steady state so the angle isn't changing. 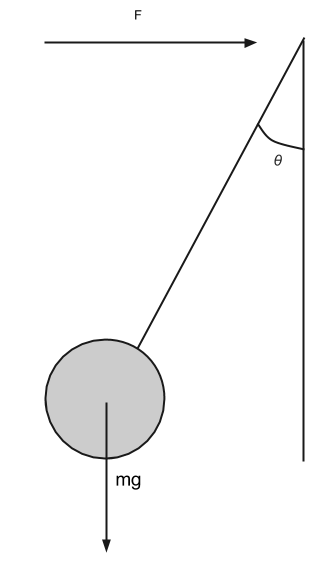 The solid pendulum has a force accelerating it to the right, and it has gravity pulling it down. The force is applied directly at the axis and contributes no torque. Gravity pulls the weight down, so is applying a torque of $(mg \times L\sin \theta)$. Yet the pendulum does not rotate. Perhaps someone else has more information about this situation. My intuition is that this is simply the wrong technique for an accelerating axis, but I'm not sure what the correct analysis would be.

Take a look on the forces diagram in the first picture. Let's ignore the force $N$ for now, it can only contribute to the tipping (due to its orientation), but since it is going to be confined to acting only on the red point as soon as the tipping occurs (if it does), it won't have any influence at all. E.g. it produces zero torque about the red point. Friction is disregarded as stated in the question.

Their torques about the red point are obtained by multiplying them by the perpendicular distance from the red point to the center of mass (that is where the forces act, since it is gravity we are talking about). The torques are $m g h \sin(\alpha)/2$ in the clockwise direction (due to the part that is parallel to the plane) and $m g w\cos(\alpha)/2$ in the counter-clockwise direction (due to the perpendicular part).

The box will tip if clockwise torque exceeds the counter-clockwise, that is when $\tan(\alpha)>w/h$. This also happens to be the condition that center of mass points outside of the box.