How to find the center of rotation? (2D)

First off, I'm assuming that a free floating polygon doesn't always rotate around its center of mass unless the net force is zero (based on the points below). If this isn't correct please tell me. 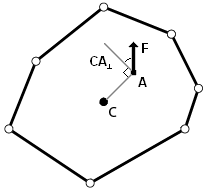 There is a easy semi-geometrical way of finding the center of rotation due to a force. 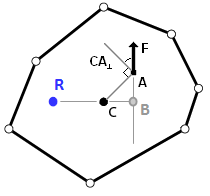 Point R is the instance center of rotation.

Lets find the same answer using the equations of motion.

Same answer!! No need to do equations of motion to get the center of rotation. The point is purely a result of the inertial properties and geometry.

I think what you are asking about is answered by the fundamental theorem in the mechanics of rigid bodies, which states that the motion of any rigid body can be decomposed into the motion of its center of mass (not necessarily rectilinear) and a rotation about its center of mass (COM). The two statements you emphasize are direct corollaries. Please see details in the suggested link or any text on the subject.

However, the idea is not that there is some intrinsic center of rotation that sometimes happens to coincide with the center of mass, or that we necessarily decompose the forces acting on the body into some component translating the COM and another generating the torque about the COM. It is just that the equations of motion acquire the simplest form when expressed this way.

So, to answer your questions directly:

Take the center of rotation as (C), regardless of where the force is applied.

All of it, in both cases. The equations of motion for the COM of your planar polygon are just $$ M \vec{a} = \vec{F}\\ I\alpha \vec{k} = \vec{T} $$ where $M$ is the total polygon mass, $\vec{a}$ is the linear acceleration of the COM (and of the rigid body), I is the moment of inertia relative to the COM, $\alpha$ is the angular acceleration about the COM, $\vec{k}$ is the unit vector normal to the polygon plane, and $\vec{T}$ is the torque of $\vec{F}$ about the COM. In 3D the torque equation would contain an additional term on the left hand side.

How do the forces add up when there's more than one?

The centre of rotation of a rigid body is actually rather poorly defined. One sensible definition (indeed, probably the one you want) is to pick the point that has zero velocity once you subtract the mean motion of the object. However, this is only a unique point once you pick a frame of reference (e.g., with respect to the "immobile" ground). If you pick a new (inertial) reference frame, you'll find a new centre of rotation that's just as well defined as the first one!

Not the answer you're looking for? Browse other questions tagged rotational-dynamics geometry or ask your own question.

18
Derivation of Newton-Euler equations
9
Why is force a localized vector and not a free vector?
2
Instantaneous Centre of Rotation
2
What does the $a$ stand for in this picture? (And some clarification)

6
Forces and torques about the CENTER OF MASS of a physical pendulum
6
Conservation of angular momentum for a rigid body rotating about a fixed point
2
Change in center of rotation of an object
2
How to determine the axis of rotation of a rigid body?
0
Does torque provide rotation?
3
Why do doors turn?
4
Requirement for being in rotational equilibrium
1
Would the rod translate in this case, or only purely rotate?