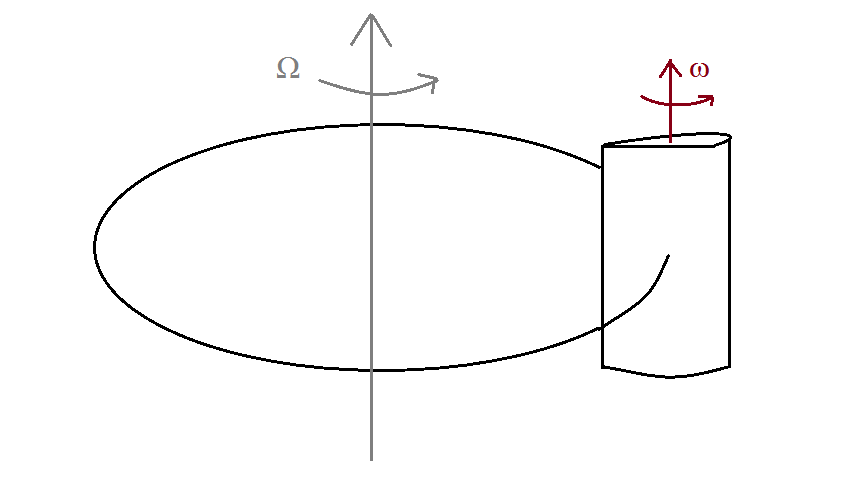 Firstly what is the angular velocity of the rigid body? I suppose that it is

And then what is the moment of inertia with respect to the axis $z$ of the rigid body? If I use parallel axis theorem I get

Where $R$ is the distance from $z$. But that doesn't seem right. The cylinder is not rotating about its center of mass at the same angular velocity of rotation about $z$. So using $(1)$ give some incorrect results. For istance kinetic energy

But that's the kinetic energy of a body rotating about $z$ and center of mass with the same angular velocity $\vec{\Omega}$, and this is not the case.

I'm confused, can anyone help me with give suggestion about angular velocity and moment of inertia in problems where the rigid body is rotating at the same time about two different axes?

It has already been somewhat answered in this other question of yours: Parallel axis theorem and Koenig theorem for angular momentum (see also my comment to the answer).

You can look at this situation in two ways. First in terms of absolute motions $\Omega$ and $\omega$, and secondly it terms of the relative motion $\dot{q} = \omega - \Omega$. The results are the same

Yes.. The two angular velocities are independent of each other...

I'm not very sure about your first equation where you add the two angular velocities...

As Leverl said, the two motions are completely different... You cannot define some "COMMON" moment of inertia...

And yeah, use Konig's theorems to solve the other two questions...

Not the answer you're looking for? Browse other questions tagged rotation moment-of-inertia rigid-body-dynamics angular-velocity or ask your own question.