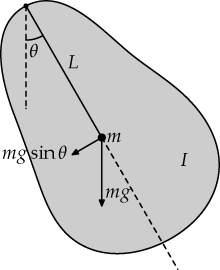 So the body's angular momentum will not point along the $z$-axis as the body rotates. This means that $L_x$ will change as the body swings. The torque necessary to change the angular momentum comes from the support point. We can imagine the support point as a "pin" that is mounted between two supports but can turn freely about the $z$-axis. It is not too hard to see that this pin can resist rotations about the $x$- and $y$-axes by exerting forces on the supports. Thus, the torque from the support point will have $\tau_z = 0$ but $\tau_x \neq 0$ and $\tau_y \neq 0$ in general, and so $L_x$ and $L_y$ will change as the object swings.

If, on the other hand, the body is supported in such a way that it can swing freely about any axis (so that $\vec{\tau}$ from the pivot point is truly zero), then it would not oscillate about the $z$-axis. If the body is released from rest such that its center of mass is in the $xy$-plane initially, and gravity is in the $y$-direction, then we will have $\tau$ along the $z$-direction initially; but that means $\omega$ would have to point along a direction such that $\vec{L}$ is along the $z$-direction. In other words, the initial rotation axis would have to point in the direction of $\mathbf{I}^{-1} \hat{z}$ initially, so that we would maintain $\vec{L} \parallel \hat{z}$ at all times. The full motion would be more complicated, and I'm honestly not sure what would happen next.