I'm trying to understand the relations between the existance of Coriolis force and the conservation of angular momentum. I found this example on Morin, which confuses me.

A carousel rotates counterclockwise with constant angular speed $ω$. Consider someone walking radially inward on the carousel (imagine a radial line painted on the carousel; the person walks along this line), at speed $v$ with respect to the carousel, at radius $r$. [...] 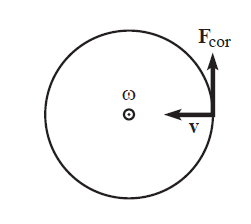 What if the person doesn’t apply a tangential friction force at his feet?

There is no friction force acting here, nor any other real force therefore the angular momentum of the person does not change.

In my view the motion of the person, seen in lab frame, would be linear motion, because, at the beginning, the person has a tangential velocity $\omega r$ and radial velocity $v$, and he will keep these two forever. But then does it makes sense to talk about conservation of angular momentum? I mean it will surely be conserved in the lab frame but the motion is on a straight line (as far as I can see).

The two highlighted parts in text are the most confusing to me.

How is acceleration produced in the lab frame initially? (Coriolis does not act there)

So firstly will the angular momentum of the person (who will move on a straight line in the lab) be conserved in the lab frame?

Secondly can anyone give some further explanations about the links between Coriolis force and conservation of angular momentum in this example?

This is indeed confusing. The confusion comes from this very peculiar hypothesis:

What if the person doesn’t apply a tangential friction force at his feet?

It implies there is a radial contact force at the person's feet (I prefer "contact" to "friction", which refers to movement). And, indeed, for the person to move radially inwards, or even to stay immobile in the carousel, they need to at least counterbalance centrifugal acceleration.

So let's imagine how the person could be "frictionless" tangentially yet "frictionful" radially: suppose there are slippery concentric rails all over the carousel, on which the person can lean to move radially, but which prevent them to control rotational speed.

In my view the motion of the person, seen in lab frame, would be linear motion, because, at the beginning, the person has a tangential velocity $ωr$ and radial velocity $v$, and he will keep these two forever. But then does it makes sense to talk about conservation of angular momentum? I mean it will surely be conserved in the lab frame but the motion is on a straight line (as far as I can see).

It does make sense! Remember, to talk about angular momentum we do not necessarily need to talk about rotational motion. Consider a particle in free fall near the Earth, with ititial position $(0,d,h)$ and zero velocity. By the formula $\vec L=\vec r\times\vec p$ one can see it has vanishing angular momentum with respect to any point on the line $(0,d,z)$, but non vanishing angular momentum with respect to the origin. The latter is $$\vec L=m(d\hat j+z\hat k)\times\left(-\sqrt{2g(h-z)} \hat k\right)=-md\sqrt{2g(h-z)}\hat i.$$ Notice that the angular momentum is not conserved through the fall, even though the motion is on a straight line. There is torque about the origin.

Going back to your example, the angular momentum is conserved because there are no torque on the particle and not because it is on a straight line.

Firstly I tried to prove that the angular momentum will be constant with time when the angular velocity of the rotating system is constant. That is, if r,u are the polar coordinates with z=0, then $u=ωt$. By having no potential at all, we build the Lagrangian function:

and again, we see that

But now, what about the inertial frame of reference? We understand that the motion will be a line, but that's something we didn't use in the previous analysis, so why use it here? What we can imagine, to understand the problem better is the following image:

This shows us (I believe...) that both the distance r and the angle u may change during the motion, something that comes closely to what an other answer here, to your post is arguing: that the angular momentum may not be by tautology zero. So, by the same exactly procedure as before, working in poolar coordinate, we find the Hamiltonian. We obviously conclude that the angular momentum will be zero. If we take that the particle moves in path, so that $ \dot u =0$, that is that the angle of the particle is constant, then we see that the Lagrange function is: $L= (½) \dot r^2 $. There is a zero-dependence from the angle, whatsoever.

Hope all this helps. What we see, is that, indeed, even in the inertial frame we can talk about angular momentum that depend solely on the trajectory (linear) of the particle in respect with the origin. In the case of the rotating system, this fact is being translated as a Coriolis force, a way to see for the observer there the conservation of angular momentum. If the angle is constant, we take what you argue as obvious in you example: conservation is a tautology. On all the other cases, we indeed find that conservation implies an acceleration to the system.