Consider a slider capable of sliding on a rod. The rod has a constant angular velocity of $\omega$, and the slider is moving up the rod with a velocity $v$ and acceleration $a$ with respect to the bar. 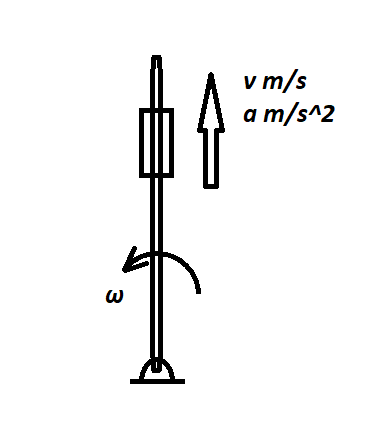 There will be no angular acceleration for the slider.

But, from what I gather from the tangential and radial components of the acceleration, these solutions are considering the Coriolis force in the inertial (ground) frame of reference as well.

I know that my understanding of the concepts is wrong here, but I cant seem to find what concept I am applying incorrectly here. Can you point me in the right direction.

I start with a description in terms of the inertial coordinate system:

As you state, the magnitude of the required centripetal force to sustain circular motion is given by:

In the scenario that you give the object is constrained to move along the rod. I will assume that the engine that is moving the rod is designed to apply additional force whenever necessary, to sustain a constant angular velocity. I will refer to this as tangential force. (For completeness: yeah, this tangential force is perpendicular to the centripetal force.)

We can derive an expression for the required tangential force as follows:
We first derive at what rate the radially moving object would lag behind if not constrained to move along the rod. To prevent that lagging-behind a force must cause tangential acceleration.

In the absence of a tangential force the angular momentum of the object is conserved.

Hence the time derivative is zero:

Dividing by r, and rearranging:

The factor $\tfrac{dr}{dt}$ is the velocity in radial direction, $v_r$

In all this gives is that if there is no force in tangential direction, and there is a velocity in radial direction, then we have the following expression for the rate of lagging behind:

But as stated earlier, the rod is driven with a constant angular velocity; the engine that drives the rod increases the force whenever necessary.

The required tangential force is opposite in direction to the tendency to lag behind. Hence:

The derivation above shows why that change of angular velocity occurs.

Towards the end of your question you write:
"from what I gather from the tangential and radial components of the acceleration, these solutions are considering the Coriolis force in the inertial (ground) frame of reference as well."

Well, the effect involves angular acceleration, which, as I stated above, is the same in the inertial and rotating coordinate system. So you get the same expressions (but with opposite sign.) But there is a naming convention going on here.

The name 'coriolis force' is used only in the context of a rotating coordinate system.

[Later edit]
About names of things: there are some conventions in circulation, but there is little consistency, and in that sense there is no right or wrong.

Issues of language aside:
The overall underlying phenomenon is inertia.

Because of inertia: to sustain circular motion a centripetal force is required.

Next case:
Let an object be in sustained circular motion. At some point the amount of centripetal force is dialed down. Then the object will gain a radial velocity. Because of inertia: as the radial distance increases the angular velocity decreases.

(If you find that confusing: I find it confusing too. Using two different names for trhe same thing doesn't make any sense.)

Not the answer you're looking for? Browse other questions tagged newtonian-mechanics reference-frames acceleration centripetal-force coriolis-effect or ask your own question.