I'm trying to understan kinematic inertial explanation of the apparent deviation of objects due to fictitious forces in rotating Earth.

Take an object moving from the equator northwards, or southwards. The observed deflection in the rotating Earth frame can be explained inertially saying that the velocity of rotation (which is the velocity of the ball, at the beginning) is greater at the equator than at the poles, so the object goes faster than the points on the surface of the Earth, thus it seems deflected. 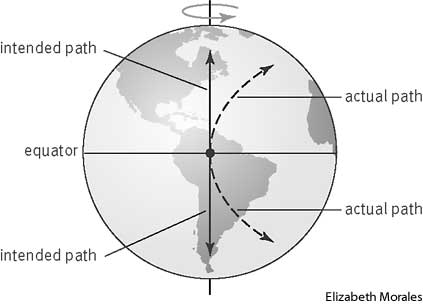 But how can this be explained via the conservation of angular momentum? $$L=mrv_{\theta}$$

In this kind of motion the object gets nearer to the axis of rotation, but the vector $r$ which is the distance from the center of the Earth and the object does not change. Morevorer $r$ must be used because the angular momentum is conserved only if the pivot point is the center of the earth (otherwise gravity exerts a torque). So how can one use the conservation of angular momentum to explain correctly the phenomenon?

The vector $\mathbf r$ does change, even though its magnitude is nearly constant. Most importantly, the component of $\mathbf r$ which is perpendicular to the rotation axis is decreasing in this example. This fact leads to the explanation for which you are searching.

Another way of seeing this would be to use this definition of angular momentum, which allows you to use the vector $\mathbf r$ directly:

Not the answer you're looking for? Browse other questions tagged angular-momentum earth rotation inertial-frames coriolis-effect or ask your own question.