Why is this charge distribution in correct? Capacitors in parallel and series

Please consider the circuit diagram below, in particular, look at the capacitors enclosed by the green loop. 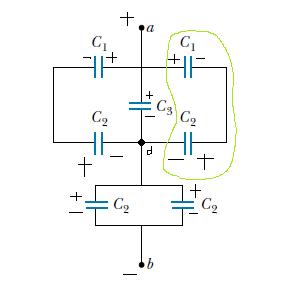 *Note that the green loop and the (+) and (-) charges on the plates were drawn by me, the original circuit has none of these.

Is the charge distribution on the plates correct? The two capacitors in the green loop have a + and - plate connected by a wire, which by definition should be in series. The three -s that joins up at point d and evenly distribute itself (split) into two paths and adds charge to the two plate near point b (sorry for poor terminologies here)

But the book treats the green loop capacitors in parallel, which must imply the configuration. 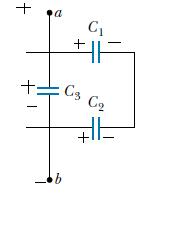 Also, I've noticed that a lot of people often just attack these problems based on the geometry of the circuits and I think they would make the same mistake as my book.

Your charge distribution is correct, though I usually don't focus on using a "correct" $\pm$ distribution in capacitors--if your sign is incorrect, you get a negative value of charge on the + plate. No biggie. In complex situations, it is sometimes even impossible to predict cjarge distribution without solving the circuit.

And your book is incorrect. $C_1-C_2$ are in series, though the entire branch is in parallel with $C_3$ and its opposite branch.

You seem to have grasped that, though :)

Out of curiosity, which book is this? (the capacitors look like they're from Resnick)