If you derive the formula

Now if you have one capacitor partially filled with a dielectric one can think of this as two (or three if the dielectric is in the middle) capacitors in series, one with the other without dielectric. Then the formula above is applied.

This seems to contradict the assumption made in the derivation of the formula above. How to solve this apparent contradiction? 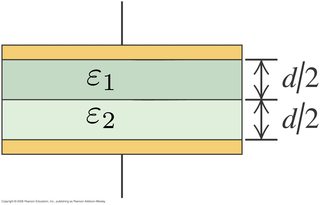 It's not hard to see how this generalizes to two materials. Indeed, the argument about surface charges does not depend on the number of materials, as you have correctly guessed.

Since now $C=Q/V$ where $Q=\sigma A$ is the free charge on the plates of area $A$, you find $$ \frac{1}{C}=\frac{V}{Q}=\frac{V_1}{\sigma A}+\frac{V_2}{\sigma A} $$ and the usual relation for capacitors in series. Note again that the same $\sigma$ of free charge appears in computing the net charge on the conducting plates. Thus, the charges on the surface of the dielectrics don't matter in the sense they never enter directly: their effect - which is to lessen the electric field in the materials - is through the introduction of $\epsilon_1$ and $\epsilon_2$.

Sorry I'm a clutz for editing the size of figures...

This simplification doesn't work as well with a dielectric because the dielectric is not a conductor which will come to electrostatic equilibrium the same way as the rest of the circuit.

Not the answer you're looking for? Browse other questions tagged electrostatics charge capacitance dielectric or ask your own question.