I was doing a theoretical research regarding life on Titan. The temperature of Titan is so low, and it needed more sunlight, as a result, the Sun would require to get hotter. My question is, when will the Sun emit 100 times more power than as that of today? 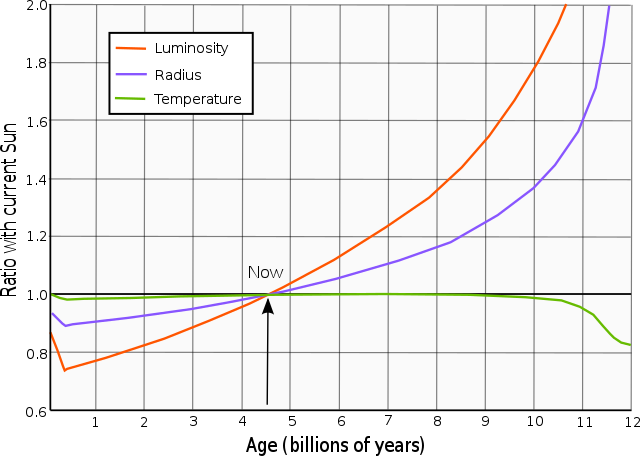 and Stefan-Boltzmann law, $$P= A\varepsilon \sigma T^4,$$ but could not figure out. It may be even impossible that the sun never reaches this stage. I would gladly appreciate any logics, mathematics, or even opinions too.

This is the plot you are looking for. This a solar model taken from the Padova evolutionary tracks by Bertelli et al. (2008). It shows the (log) solar luminosity in terms of the current solar luminosity, as a function of age in years.

From this plot we see that the Sun reaches 100 times its present luminosity at an age of 12.50 Gyr (that is 12.50-4.57=7.43 billion years from now). The Sun is on the first ascent giant branch, burning hydrogen in a shell around its inert helium core.

In practice the figure is not precise to 3 sig figs because it depends to a certain extent on the details of the mass-loss during the giant branch phase and also perhaps more importantly on mixing near the Sun's core, which is still not fully understood. 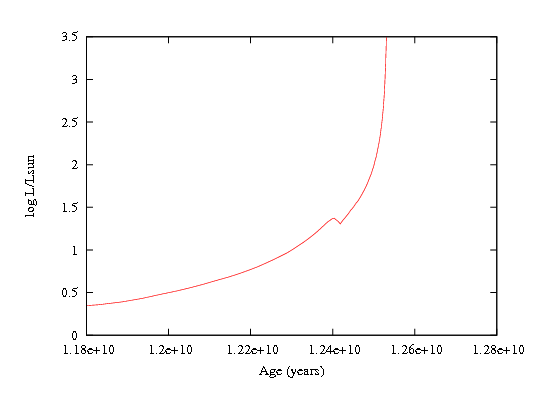 If this site is to be believed, it will only happen for a relatively brief period during the Sun's red giant phase, 7.5 billion years from now (give or take):

Around the year 7.1 billion AD, the Sun will begin evolving so rapidly that it will cease to be a main-sequence star. Its position on the H-R diagram will begin to shift from where it is now, near the center, towards the upper right where the red giants live. This is because the Sun's helium core will eventually reach a critical point where the pressure from normal gasses cannot hold up the crushing weight being piled on it (not even gasses heated to tens of millions of degrees). A tiny seed of electron-degenerate matter will begin to grow at the center of the Sun. The details of this transition are subject to debate, but theoretical calculations indicate that it will begin when the Sun's inert helium core reaches about 13% of a solar mass, or about 140 Jupiters.

At this point in its life, the Sun will become unruly. ... 500 million years after it hits the critical point, the Sun's luminosity will balloon to 34 $L_0$, fiery enough to create glowing lakes of molten aluminum and copper on the Earth's surface. In only 45 million years more it will reach 105 $L_0$, and 40 million years after that it will leap to an incredible 2,300 $L_0$.

$L_0$ here is the sun's current luminosity (i.e., its total luminous power output). It sounds like the period of time when the Sun's luminosity is between 10 & 1000 times what it is now will only last 100 million years at most. Unfortunately, this would probably not be long enough for Titanean life to evolve into anything interesting (more's the pity.)

Oh, and the dip in the "temperature" graph you posted in the OP is the beginning of the red giant phase. Note that the surface temperature of the Sun is actually cooler during the period in question; but the huge radius of the Sun at this time gives it a much larger surface area $A$ which more than makes up for it.

Not the answer you're looking for? Browse other questions tagged astrophysics thermal-radiation sun or ask your own question.

2
Will the sun cool and produce a disrupting EMP?
8
How close can spaceship get to the Sun
4
What size will the Sun become once it is a red giant?
25
Where will the Goldilocks zone be when the Sun becomes a red giant?
1
Will a black body placed somewhere around the Sun obtain (eventually) the same temperature as the Sun?
0
Is the yellow Sun light produced by photon scattering inside the Sun?
0
The temperature of the surface of the sun
0
How to get spectral data of Sun?